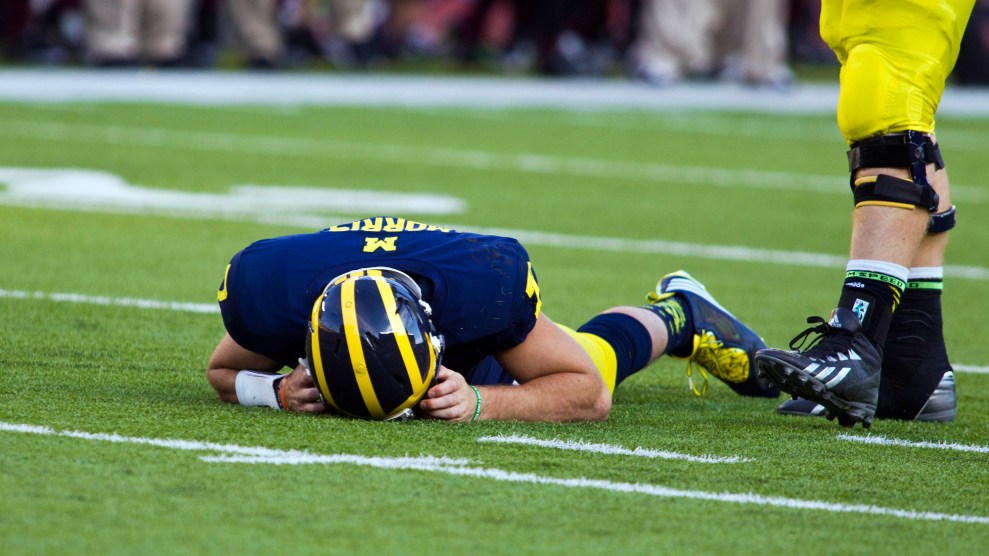 Former football players at the University of Michigan joined those at 23 other institutions in filing individual lawsuits against major conferences and the NCAA over their handling of concussions.Tony Ding/AP

During his four years as a football player at the University of Miami, Ryan Hill remembers getting several concussions. Six years later, Hill says he still feels the consequences—acute headaches, depression, mood swings, and more. So do at least 41 other former players across the country, according to a growing batch of lawsuits filed since May against major football conferences, the NCAA, and, in some cases, the schools themselves.

The 42 lawsuits allege that before 2010—when the NCAA approved legislation forcing schools to create guidelines for dealing with concussions—universities, athletic conferences, and the NCAA knew or should have known the risks associated with playing football but failed to inform student-athletes and implement policies to protect them. They “actively concealed this information to protect the very profitable business of ‘amateur’ college football,” the lawsuits allege.

The cases involve former players of high-profile football programs in powerhouse conferences, like Georgia, Oregon, Miami, and Penn State. Most name only the athletic conferences (the Pac-12, Big Ten, etc.) and the NCAA because state laws offer immunity to public institutions from being sued.

“Essentially what they are saying is you did not have mechanisms in place to protect people who were being injured,” said Paul Haagen, a Duke University law professor and co-director of its Center for Sports Law and Policy. The pursuit of damages, he added, ties head injuries sustained during players’ careers with the outsize revenues generated by elite football programs and their conferences—entities that “arguably had responsibility and who have money.”

“[I]t appears that counsel is attempting to extract a bodily injury settlement through the filing of these new questionable class actions. This strategy will not work.”

An NCAA representative called the cases “mere copycats,” saying in a statement to Mother Jones that the cases did not “present legitimate legal arguments.” “[I]t appears that counsel is attempting to extract a bodily injury settlement through the filing of these new questionable class actions,” the spokeswoman added. “This strategy will not work.”

The suits arose out of a separate, long-standing legal dispute that began in 2011. That’s when Adrian Arrington, who played at Eastern Illinois University and later for the NFL’s New Orleans Saints, and other former athletes sued the NCAA over its failure to protect student-athletes from the long-term effects of concussions, which have been associated with degenerative brain disorders like chronic traumatic encephalopathy. In July 2014, the NCAA reached a proposed settlement that included putting $70 million toward testing former athletes over the next 50 years to monitor the lingering effects of head injuries, as well as an additional $5 million toward concussion-related research. It also compelled schools to make changes to their concussion protocols and policies for athletes returning to play. But it didn’t include specific compensation for the medical costs of former athletes who have suffered from head injuries after their playing careers are over.

A month after the two sides reached an agreement, Jay Edelson, founder of Edelson PC, a Chicago-based law firm known for its privacy lawsuits against tech giants like Apple, Google, and Facebook, intervened. He challenged the settlement on behalf of former San Diego State University football player Anthony Nichols, noting that it only covered medical tests, not the other medical costs that accompany those injuries. Steve Berman, one of the attorneys representing Arrington, pushed back, telling CBS Sports that the NCAA would not be liable for injuries that vary on an individual basis. “We’re not letting the NCAA off easy,” he added. “The notion that there are billions of dollars of claims out there is ridiculous.”

“We didn’t think the settlement was fair…The fact they were going to give up every right that they had for very little, we thought it was an injustice.”

In June 2015, Arrington said in a statement through the National College Players Association that he opposed the agreement with the NCAA because it didn’t directly compensate athletes. Six months later, in January, Judge John Z. Lee preliminarily approved the settlement with an important change: Former athletes could sue their colleges and universities, conferences, and the NCAA as a class for damages and claims that “do not relate in any way to medical monitoring or medical treatment of concussions or sub-concussive hits or contact.” The decision opened a flood of individual lawsuits, led by attorneys at Edelson PC. “To be completely frank, we wanted to get involved in the case,” says Christopher Dore, a partner at Edelson. “We didn’t think the settlement was fair…The fact they were going to give up every right that they had for very little, we thought it was an injustice.”

In May, six new lawsuits were filed. Two months later, Lee again preliminarily approved the settlement. The number has since grown to at least 24, with seven filed on Wednesday alone. Dore says that more will be filed over the weekend—the latest involve athletes at the University of California-Berkeley and the University of Kansas—and that the count could reach as high as 50 to 60. Currently, the Southeastern Conference, which made $455.8 million in total revenue during the 2014-15 fiscal year, faces eight lawsuits, the most of any athletic conference.

Edelson told CBS Sports in May that the goal “is to get people who are injured financial compensation—something that hasn’t happened as of yet.” Unlike the proposed NFL settlement, which could result in an estimated $1 billion for more than 20,000 former players, the NCAA agreement focused on medical testing for athletes without covering the damage already done to them, Dore says. (The NFL’s proposed settlement is now on hold after lawyers for the estate of former Buffalo Bills running back Cookie Gilchrist filed a petition for a hearing before the Supreme Court.) “We believe this is something that has been ongoing across college football for a long time,” he adds. “There is a group failure to do right by these students.”

Here’s a look at the schools involved in the individual lawsuits. Note that some are not named as parties in the lawsuits because, as state institutions, they share immunity from these types of cases: