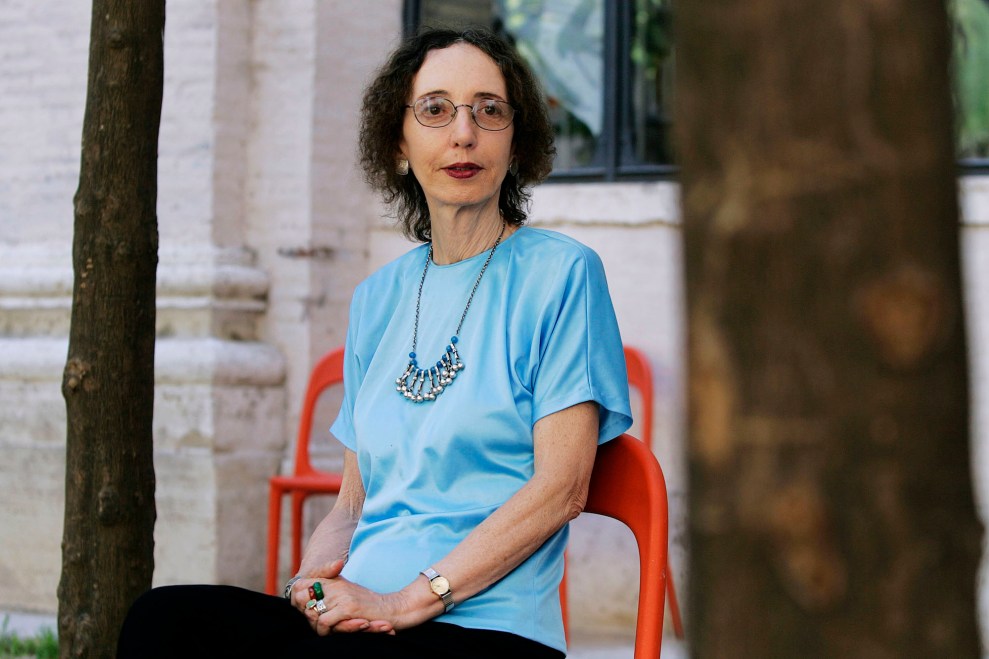 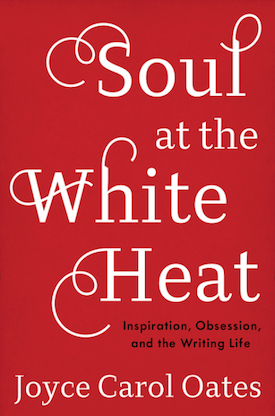 To call Joyce Carol Oates merely prolific would be a towering understatement. Her debut novel, With Shuddering Fall, appeared back in 1964, and Oates, now 78, has been a prodigious presence in American literature ever since, pumping out novels, short stories, poetry, plays, nonfiction works, and even children’s books—more than 100 titles in all. There’s no shortage of accolades either. She’s won a National Humanities Medal, a National Book Award, the PEN/Malamud Award for Excellence in Short Fiction, two O Henry Awards, and the National Book Critics Circle Ivan Sandrof Lifetime Achievement Award, to name just a handful.

Soul at the White Heat, an essay collection out on September 20, is Oates’ third book this year and perhaps one of her more meditative. Drawing on an array of canonical authors past and contemporary, she investigates what motivates some of the most prominent literary voices in the English language to do what they do. The author, whose dedication to the craft is beyond question, also scrutinizes her own relationship with the written word. I reached out to Oates via email to inquire about her process, her myriad voices, and how she maintains this literary stamina.

Mother Jones: In the opening essay of Soul at the White Heat, you stake out the different approaches of famous writers pertaining to the place of politics (or social justice) in their writing. On one side we have the likes of Harriet Beecher Stowe, Upton Sinclair, Charles Dickens. On the other there are Oscar Wilde and Vladimir Nabokov, who dismissed this type of writing roundly (“mediocrity thrives on ideas”). What place do politics hold in your writing?

Joyce Carol Oates: The greatest works of literature seem to embody both “art” and “morality” (of some sort). We come away from the tragedies of Shakespeare with a profound sense of having encountered reality in its most pristine form—yet the art-work is elaborately artificial, the very genre of tragedy in poetry an anti-naturalist perspective. Of course, both Wilde & Nabokov believe in many things, and these things emerge in their writing clearly—for Wilde, the folly of humankind and the (romantic) grandeur of the heroic, lone individual (not unlike Wilde himself); for Nabokov, the possibility of a kind of transcendence through a great, prevailing, superior sort of love (especially in Ada, the most self-congratulatory of novels.) There is a greater art in Dickens than in either Wilde or Nabokov, but it isn’t at the expense of Dickens’ social conscience. It would be difficult for a writer of realism to avoid suggesting a political/moral perspective in his or her fiction. “Politics” per se is absent from my writing but there is usually a moral (if ironic) compass.

“Art is about freedom of expression, and should not be molded to fit any propaganda or lofty ideal.”

Art is about freedom of expression, and should not be molded to fit any propaganda or lofty ideal. I feel akin to Shakespeare in the sense that, as I see it, he lived to dramatize the unfailingly exciting, unfathomably strange interplay among human beings that constitutes “scenes” in his plays, and constitutes “story” in prose fiction. There is something thrilling in the mimesis of life’s surprising unfolding. Long ago I’d said that I am “fascinated by the phantasmagoria of human personality”—this is perhaps even truer now than years ago.

MJ: Fiction writers in particular, it seems, often have an almost filial closeness with their characters. Do you share this?

JCO: Yes, the characters’ voices are sometimes (to me) so absorbing, I feel a terrible loss when I (eventually must) complete a work of fiction. Sometimes I stumble upon a wonderfully irresistible (to me) voice, unexpectedly; the young narrator of Expensive People, for instance, which was my first extended experience of writing in a voice distinctly not my own. Another, the narrator of Zombie. Still another, the narrator of My Sister, My Love. These novels are so special to me. (I don’t expect that they will have nearly the same significance to anyone else.) They represent a kind of fiction I would love to pursue more or less constantly, but dare not. (Why not? Not sure.)

MJ: I’m curious whether you approach reading with the same ferocity you apply to your writing?

“My first love was reading, which inspired me to write. Reading yields a wish to write, I think.”

JCO: Well, I am more or less reading all the time. My first love was reading, which inspired me to write. Reading yields a wish to write, I think, except if the reading is dull and uninspiring. It’s impossible to read a distinctive stylist like Faulkner, Joyce, Kafka, Mann, Woolf, James—and many more—without wanting to write, however entirely different one’s writing will be. That is the mystery: Reading Henry James can yield prose that is contrary to James, yet inspired by him. Who can understand this?

MJ: So much of your personal life goes into your writing. Is there anything off limits?

JCO: I tend to think in dramatic terms. In life, there may be an actual drama, but it would be the fictionalized, imagined drama that engaged me. Whenever I write about something that is (if remotely) real, it is imbued with the surreal and invented, as in most of my “real” settings like Detroit (them, and Do With Me What You Will), Syracuse (I’ll Take You There), Princeton (American Appetites, The Accursed). Nabokov said, “Ordinary reality begins to rot and stink if the imagination does not transform it.” For me, ordinary reality is a starting point. (Of course there is nothing “ordinary” about reality. Look what Joyce did with Dublin.)

MJ: I’m wondering what drives you to write so much, and what you hope to convey at this point in your career.

JCO: I don’t really seem, to myself, to write “so much”—nor do I write quickly. You would be surprised, perhaps stunned, to see how much revising I do in a typical morning. Obviously, there is pleasure in the execution of any sort of art, and using language, as Nabokov felt also, is an exquisite process. Writing allows for fictitious voices—the voices of persons unlike myself—that might otherwise be muted.

“Much in our lives is chance. I did not consider that I would lead a literary life.”

MJ: As someone whose first name is Joyce, who has taught James Joyce extensively, whose writing seems influenced by Joyce, do you ever feel like your literary life was a product of predestination?

JCO: I don’t believe in predestination—except for genetic predilections. Much in our lives is chance. I did not consider that I would lead a literary life. I’d thought initially, as a young girl, that I would be a teacher, since I so admired many of my teachers. And though I loved writing, I did not ever think of myself as a writer.

MJ: Soul and the White Heat contains reviews and literary analyses that have withstood the test of time. Are there works of literature about which you’ve had a radical change of opinion?

JCO: Nothing really comes to mind. I did not appreciate D.H. Lawrence so much as a younger writer as I did some years later, and I have not ever quite appreciated Virginia Woolf as so many others do, though I admire her diary enormously—it is one of the great diaries. Each time I undertake to reread Woolf, I am somewhat baffled by the signature breathlessness and relentlessly “poetic” tone, the shimmering impressionism, so very different from the vivid, precise, magisterial (and often very funny) prose of her contemporary James Joyce.

MJ: Tell me a bit more about your own writing process.

JCO: One of the qualities of writing that is not much stressed is its problem-solving aspect, having to do with the presentation of material: how to structure it, what sort of sentences (direct, elliptical, simple or compound, syntactically elaborate), what tone (in art, “tone” is everything), pacing. Paragraphing is a way of dramatization, as the look of a poem on a page is dramatic; where to break lines, where to end sentences. It’s always a challenge to discover the most effective first sentence, and the most effective final sentence, in a chapter for instance, and in the book as a whole. All these elements are particularly intriguing when a collection of short stories is assembled, for each story relates to the others thematically, and first stories and last stories should be related. It is important for me to discover the ideal title, for without this title the story or novel isn’t quite in focus.

“To choose the ideal voice for a character is to give a character an ardent and vivid life, to allow him or her to speak.”

All of these processes are constantly undergoing change, of course. “The first sentence can’t be written until the final sentence has been written.” Only when you have completed a novel, or a story, can you return to the beginning and revise or rewrite. Though I revise constantly as I write, I will usually revise much of the work again after I’ve reached the ending. We have not discussed genres, but each genre exerts a considerable spell, as a kind of “form” to be filled, as a Shakespearean sonnet is filled.

I should stress that, for me, voice is predominant. I rarely write in my own voice except in book reviews and memoirs; otherwise, I am writing in mediated voices, modulated in terms of the characters whom the voices express. To choose the ideal voice for a character is to give a character an ardent and vivid life, to allow him or her to speak, rather than speaking for them, in an older style of omniscient narration. If Shakespeare’s great plays are variants of stories, even novels, you can see how each character is telling his story from his perspective; each is vying with the others for dominance, but in the end, in tragedy, most of these voices will die, to be replaced by the yet more vigorous voice of a younger generation. Shakespeare would seem to have been a person for whom the human voice/personality in all its splendid idiosyncrasy was absolutely enthralling.