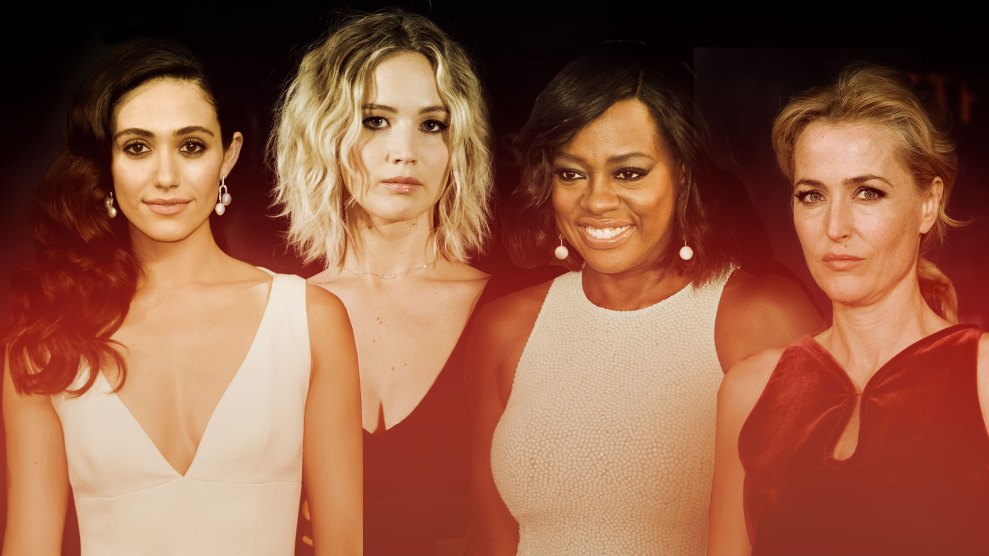 In early December, Emmy Rossum became the latest actress to demand the appropriate pay for her work. Rossum, who plays the feisty Fiona Gallagher on the hit Showtime series Shameless, asked for greater compensation than her co-star, William Macy, who has more experience but less screen time on the show. Variety reported that the studio offered Rossum pay equal to Macy’s, but that her team asked for more in order to compensate for her previous seven seasons of lower earnings.

Hollywood’s wage gap can’t compare with the wage gap affecting everyone else, particularly the working class and, to an even greater degree, women of color. But these movie stars show that no woman, regardless of her status, is completely exempt from gender-based disparity in pay. A report released by Forbes earlier this year reviewing Hollywood salaries found that the nation’s top actresses collectively are paid less than half of what their male counterparts earn. Top-earning actress Jennifer Lawrence was paid $46 million from June 2015 to June 2016. Dwayne “The Rock” Johnson, America’s top-earning actor, was paid $64.5 million. Melissa McCarthy, the runner-up for the top female earner, earned $33 million, compared with Jackie Chan’s $61 million.

Some leading ladies have spoken out about the wage gap and how they handle it. Here’s what they have to say:

Felicity Jones: The female lead for the latest installment in the Star Wars universe negotiated a seven-figure salary for her role in Rogue One. Diego Luna and Ben Mendelsohn, the male leads in the blockbuster, earned six figures. “I want to be paid fairly for the work I’m doing,” Jones said in an interview with Glamour. “That’s what every single woman around the world wants.”

Robin Wright: During an event called “Insight Dialogues,” billed as a series of conversations with thought leaders and activists hosted by the Rockefeller Foundation in New York, Wright said she had recently demanded pay equal to that of co-star Kevin Spacey on the Netflix political drama House of Cards. “I was looking at statistics and Claire Underwood’s character was more popular than [Frank’s] for a period of time,” Wright said. “So I capitalized on that moment. I was like, ‘You better pay me or I’m going to go public,’ and they did.”

Michelle Rodriguez: The Fast and Furious actress told TMZ she gets paid less than her colleagues. “It’s like, ‘Oh damn. Darn my luck. I wish I was born somewhere else or maybe some other way,'” she said. “That’s the world we live in, it’s a patriarchal society.”

Jennifer Lawrence: In an essay for Lenny Letter, Lawrence wrote about her frustration with the wage gap and, not surprisingly, the 26-year-old Hunger Games star did not mince words. “When the Sony hack happened and I found out how much less I was being paid than the lucky people with dicks, I didn’t get mad at Sony,” she wrote. “I got mad at myself. I failed as a negotiator because I gave up early.” Lawrence went on to describe how women have been socialized to not seem “difficult,” and how any hint of such behavior will garner negative responses from male colleagues. As of 2016, Lawrence is the world’s highest-paid actress.

Sharon Stone: Last year, the actress and producer told People that after her 1992 performance in Basic Instinct, she could not get the pay she knew she deserved. “I remember sitting in my kitchen with my manager and just crying and saying I’m not going to work until I get paid,” she said. “I still got paid so much less than any men.” She observed that eliminating the earning disparities has to start with “regular pay, not just for movie stars, but regular pay for regular women in the regular job.”

Rooney Mara: Perhaps best known for her jarring performance as the lead in The Girl With the Dragon Tattoo, Mara told the Guardian about her own experience with the wage gap. “I’ve been in films where I’ve found out my male co-star got paid double what I got paid, and it’s just a reality of the time that we live in,” she said. “To me, it’s frustrating but, at the same time, I’m just grateful to be getting paid at all for what I do.”

Patricia Arquette: The Boyhood actress made headlines last year when she used her acceptance speech for Best Supporting Actress to speak out against the wage gap. She told Mother Jones that her fight goes far beyond Hollywood—Arquette has gone to the halls of Congress to lobby for the Equal Pay Act. “I don’t want the wage gap to be viewed as this myopic problem, because it’s not,” she said. “It’s in 98 percent of all businesses, and it’s easy for people to dismiss the conversation when they think it’s around white women entertainers. But this is about all women in America.”

Viola Davis: In an interview with Mashable, Viola Davis, who recently won an Emmy for her role on in How to Get Away With Murder, said the wage gap sends the wrong message to young women. “What are you telling your daughter when she grows up?” Davis asked. “‘You’ve got to understand that you’re a girl. You have a vagina, so that’s not as valuable.'” But the barriers are much harder to surmount for women of color. “The struggle for us as women of color is just to be seen the same as our white female counterparts.”

Rose McGowan: Last year, McGowan, best known for her roles in Charmed and Grindhouse, hijacked a bipartisan political gala in DC to take a stand against unequal pay. “And I would say to you: One, get out of my body; two, equal pay for women; three, integrate,” she shouted before storming out. She had not been invited to speak at the event. McGowan had been fired by her agent months earlier after her very public criticism of a casting call for an Adam Sandler film that called for actresses to wear pushup bras.

Gillian Anderson: Twice Anderson was offered less pay than her co-star David Duchoveny on The X-Files—first when the show aired in the ’90s, and again when they revived their roles for a new season in 2015. The second time, Anderson objected and reportedly won out in the end. The two actors were paid the same for the reboot.