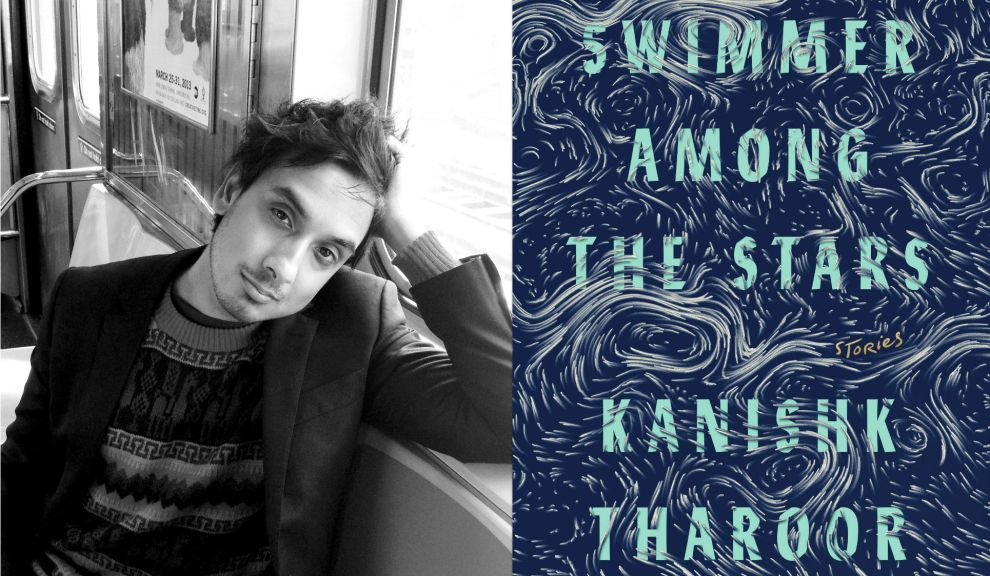 In an era when insular politics have taken hold across the US and parts of Europe, Kanishk Tharoor’s debut short story collection Swimmer Among the Stars: Stories (Farrar, Straus and Giroux) is refreshing for its lack of attachment to national borders. Blending together the futuristic and folkloric with contemporary social and political concerns, Tharoor leads readers from a circus-like ethnography of a single woman speaking an endangered language to an eerie Skype call between a coal mine worker and the foreign photojournalist who splashes his image on a magazine.

Much of the collection’s charm probably owes to Tharoor’s own peripatetic adolescence, spent shuttling between Geneva, New York, and Calcutta as the son of Indian statesman Shashi Tharoor. “Even though I’m Indian and I grew up in America, the lineages which my fiction aspires to aren’t just Indian or American,” Tharoor says. “I can find as much pleasure and value reading a Finnish epic.” The result is a style of writing that lifts its references liberally across time and space rather than wrestling with the split of a hyphenated identity: “I was able to grow up in New York City with a sense of myself as an Indian who happened to be living in New York.”

Tharoor is perhaps best known as the presenter of last year’s BBC radio series on the Museum of Lost Objects, which looked at the plunder and destruction of antiquities during the wars in Syria and Iraq. “The past has always felt contemporary and relevant to me,” Tharoor says. His own upbringing sparked a “wider interest in recovering the kinds of connections and moments in history” that are buried. I talked to Tharoor about his upbringing and fiction’s role in the age of nationalist fervor.

Mother Jones: Given the surge of nationalism sweeping through the US and parts of Europe recently, what role do you see for authors in societies seemingly retreating from globalization?

Kanishk Tharoor: I do think it is incumbent upon writers to open their fiction to a wider frame of reference. Americans have always had this luxury of being a “continent of a nation.” A lot of people elsewhere in the world have to be a lot more open to the literature of other places because they’re smaller. America is so big—in every sense—so Americans have always been able to satisfy their cultural needs within the bounds of their [own] nation. I think what we consider American literature can often be a little bit insular. It would be great if people read more translation, or if American writers took a wider interest in the world beyond the immediate world of their [own country’s] fiction. At a minimum, we should all be reading more literature from other places: That’s one of the best ways that the walls around us can be knocked down.

“At a minimum, we should all be reading more literature from other places: That’s one of the best ways that the walls around us can be knocked down.”

MJ: What unites the stories in Swimmer Among the Stars, in your view? Why did you feel they belonged together?

KT: I’m always interested in recovering lost moments that often get suppressed in the larger, dominant narrative. A lot of these stories are about recovering lost objects. Even if one story is set in an apocryphal village in central Asia, and another is set in outer space, there is a thematic interest that links them.

MJ: The “Fall of an Eyelash” looks at refugees. Was the genesis of that story directly linked to the news cycle?

KT: Part of it is actually based on a family friend’s story who fled Iran. When I wrote this story, it was before waves of Syrian refugees entered Europe, and seeing that crisis metastasizing. We live in the greatest era of displacement because of conflict and this short story is certainly interested in the experience of that problem.

MJ: What about the story “Portrait with Coal Fire”?

KT: I was looking at this photo of an Indian miner in deplorable conditions doing horrific work. There’s a great deal of sympathy on the part of the photographer and indeed the readers of the magazine itself. At the same time, it made me think about: Has the man seen this photograph, and what does he think about seeing himself in a magazine like this, if that was even possible? It was almost a thought experiment—to imagine what would it be like to be photographed and try to be represented in a way that you thought was more appropriate.

MJ: With your father Shashi Tharoor publishing more than a dozen books, mostly on the history and politics of India, how much of your own literary journey started at home?

KT: My dad is a writer, but my mom is a professor of English literature as well, so I grew up in a household flooded with books.  I’m also a broadcast journalist, which I do alongside my fiction work. Readers of the collection will see there is pretty strong historical interest present. For a while, I considered becoming a historian, but I decided the kind of writing I wanted to do was not academic writing.

MJ: One of your characters is the last speaker of an unnamed language. Are you interested the preservation of rare languages? How many languages do you speak?

KT: I speak maybe six or seven languages imperfectly. I don’t really consider myself much of a polyglot.

The issue of language extinction has always interested me. We live in crazy times in human history in terms of the death of languages. A friend of mine runs the Endangered Language Alliance, Ross Perlin, and he studies languages and endangered languages. He turned me on to the fact that in New York City, where I live, over 800 languages are spoken in the city. There are many languages here, whether they’re from East Africa or southeast Asia or wherever else, which are no longer spoken in the places where they came from, but survive here in dying form amongst immigrant communities. As people who read, write, think, and dream in English, it is incumbent upon us to be aware of the damages or the losses incurred by these languages.

MJ: One of your short stories hints at the danger of climate change. How do you see an author’s duty, if there is one, to engage with political or environmental struggles?

KT: Fiction, I think, can make people think about issues, can spark imaginations, can open doors, can take people out of their own frame of reference. All those things are good. That’s what I would like to do with my fiction. I don’t know how much I would like to serve an advocacy function. If there is a story that touches on climate change, I think the message is embedded in the conceit of the story.