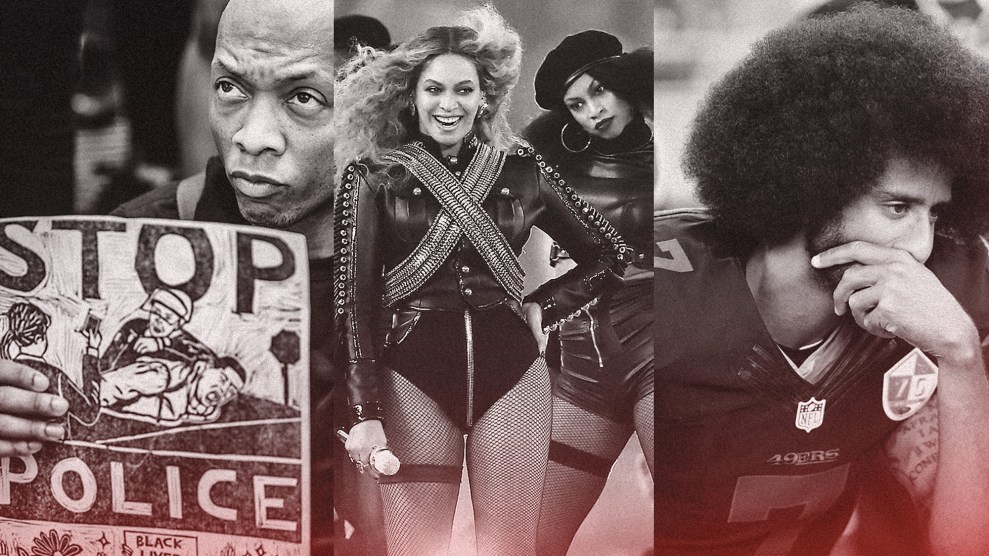 Also read: “None of Us Is Entirely Innocent”: A Timeline of Police Violence and Backlash.Erik McGregor/Zuma; Cary Edmondson/Reuters; Kevin Terrell/AP

In Shots Fired, the buzzworthy police drama premiering March 22 on Fox, federal agents investigate a black cop who has gunned down a young, unarmed white man. By the numbers, police actually kill more white people than they kill black people, but they kill black people at a far higher rate. Using population data from the Census Bureau and police shooting data from the Washington Post‘s 2015 database, we calculated that black men between the ages of 18 and 44 were 3.2 times as likely as white men the same age to be killed by a police officer. And while black men make up only about 6 percent of the US population, last year they accounted for one-third of the unarmed people killed by police.

We’ve obviously got some policing issues, but the Trump administration seems inclined to look the other way. Last month, in his first speech as attorney general, Jeff Sessions made clear that his Justice Department will curtail the monitoring of problem-plagued police departments that the Obama administration used as a tactic to combat civil rights violations by police. (Sessions suggested the monitoring had undermined “respect for our police and made, oftentimes, their job more difficult.”) Lest readers have forgotten just how divisive the racial disparities in law enforcement have been, and continue to be, we put together this brief history of recent police violence and backlash to it.

July 2013
Sickened by the acquittal of Trayvon Martin’s killer, labor organizer Alicia Garza writes on Facebook, “I continue to be surprised at how little Black lives matter.” Her friend Patrisse Cullors turns the last bit into a hashtag.

Daniel Leal-Olivas/PA Wire via AP Photo
March 2014
In a Pew poll, 46 percent of Americans agree that “our country needs to continue making changes to give blacks equal rights with whites.”
July 2014
Eric Garner is choked to death by an officer on Staten Island, New York. His last words, “I can’t breathe,” become a civil rights slogan. 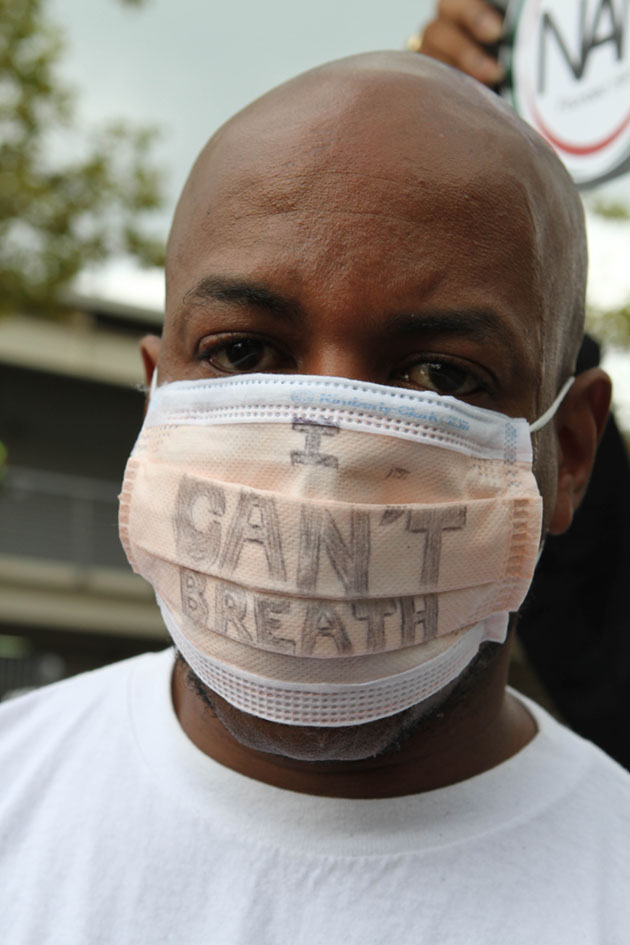 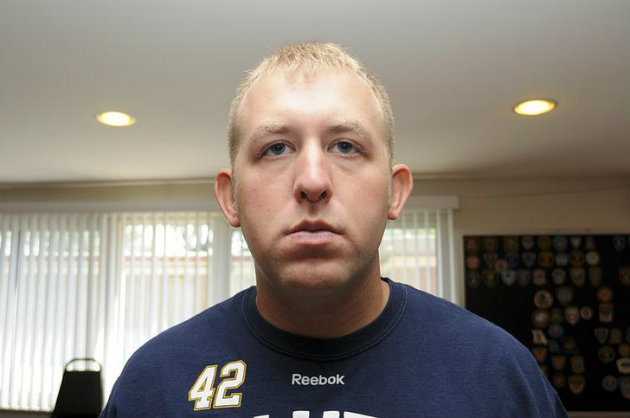 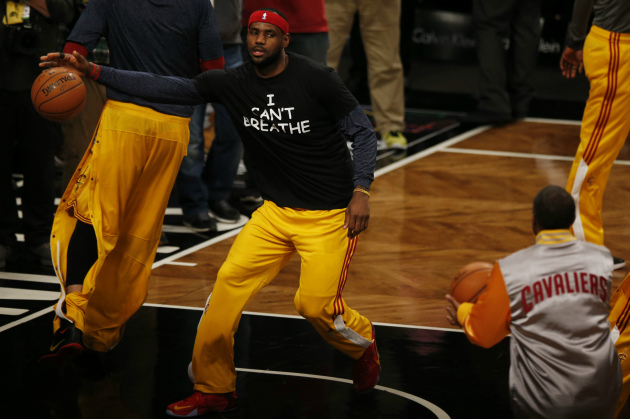 Jonathan Brady/ PA Wire via Zuma Images
Dec. 18, 2014
The White House announces a new task force to “strengthen trust among law enforcement officers and the communities they serve.”
Dec. 20, 2014
Two NYPD officers are ambushed. Their killer, a black man, had posted a photo of his gun on Instagram: “I’m Putting Wings On Pigs Today.”
Jan. 2015
#BlackLivesMatter tweets average 10,000 a day. 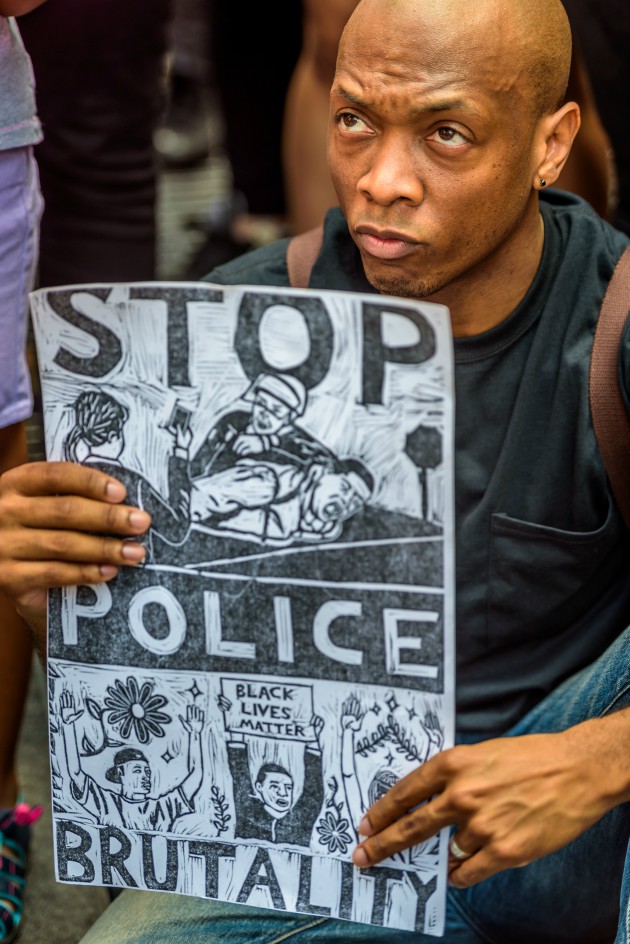 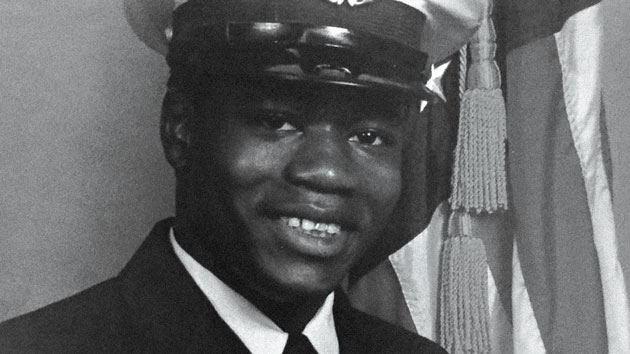 Walter Scott in his Coast Guard days Courtesy of the Scott family
April 19, 2015
Freddie Gray dies of his injuries after a “rough ride” in a Baltimore police van.
May 2015
“I have heard your calls for ‘no justice, no peace,'” prosecutor Marilyn Mosby says as she announces charges against six officers in the Gray case. The White House task force releases its report: Police must “embrace a guardian—rather than a warrior—mindset.” 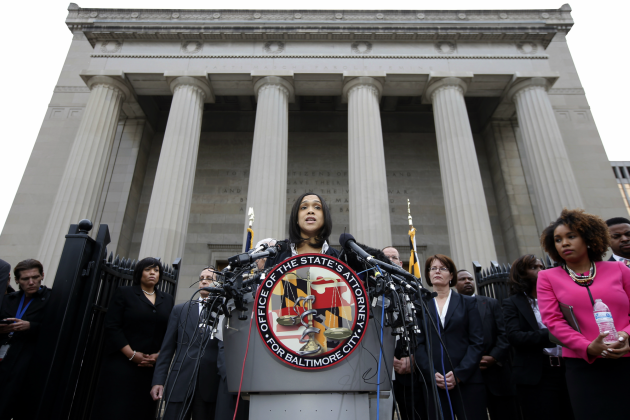 Nov. 19, 2015
A judge orders the release of dash-cam footage that appears to show McDonald walking away from police when he was shot. Chicago Mayor Rahm Emanuel fires his police chief the next month.
Nov. 22, 2015
Presidential candidate Donald Trump tweets out a chart of fabricated crime statistics suggesting that black criminals are responsible for the vast majority of homicides against white people. It’s entirely bogus. Here’s Politifact’s summary:

Feb. 7, 2016
Beyoncé’s dancers adopt a Black Panther look for the Super Bowl halftime show. Police unions call for a boycott of the star.

Feb. 24, 2016
BLM activists disrupt a Hillary Clinton fundraiser, demanding she apologize for her racially charged comments about “super predators” during the 1990s. Clinton appears irritated, but the next day she does just that.
May 2016
The first state “Blue Lives Matter” bill passes in Louisiana. Attacking a cop is now a hate crime.
June 2016
The police-van driver in the Freddie Gray case is acquitted.
July 5, 2016
Alton Sterling is fatally shot by police in Baton Rouge, Louisiana, while officers have him pinned to the ground.
July 6, 2016
During a traffic stop, a Minnesota cop shoots Philando Castile as he reaches for his wallet—that’s according to Castile’s girlfriend, who livestreamed his demise on Facebook: “You told him to get his ID, sir!” 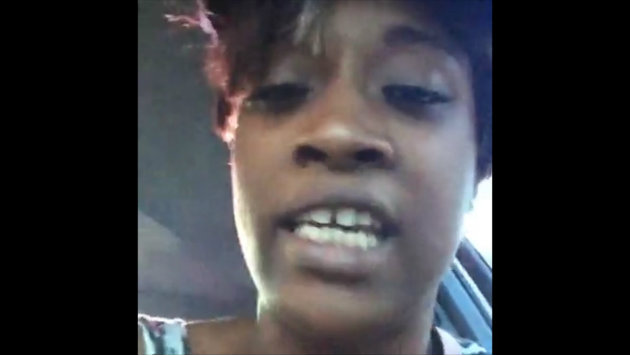 July 7, 2016
A black gunman kills five cops at a Dallas protest against police violence. He holes up in a parking garage, where police kill him with an explosives-bearing robot.
July 12, 2016
President Barack Obama defends Black Lives Matter at a memorial for the slain officers. “We have all seen this bigotry in our lives at some point,” and “none of us is entirely innocent,” he says. “That includes our police departments.”
July 17, 2016
A black military vet who ranted online about the treatment of black people by police assassinates three officers (one of them black) in Baton Rouge.
July 18, 2016
At the Republican National Convention, Milwaukee Sheriff David Clarke, who is black, proclaims that “blue lives matter.” In an op-ed the same day, he calls Black Lives Matter the “enemy.” 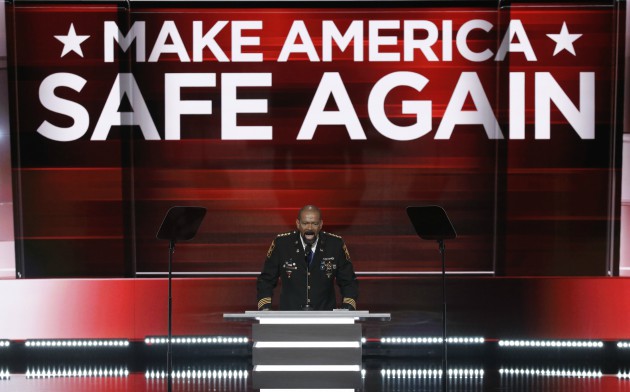 Mike Segar/Reuters via ZUMA Press
July 18, 2016
A police officer in Florida shoots a black caregiver who was lying in the street with his hands up. A union rep explains that the officer had been aiming at the man’s autistic patient, whose toy truck he mistook for a firearm.
July 27, 2016
After further acquittals in the Freddie Gray case, charges are dropped against the remaining officers.
Aug. 2016
49ers quarterback Colin Kaepernick starts sitting out the national anthem to protest police violence. A few pros and countless high school and college athletes follow suit. 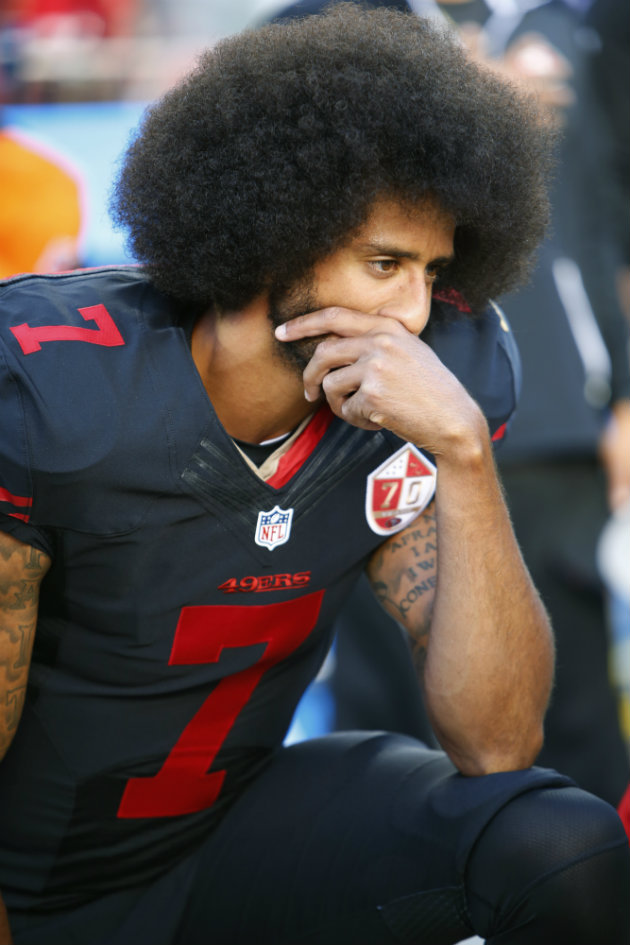 Kevin Terrell/AP
Sept. 2016
Clinton debates Trump: “I think implicit bias is a problem for everyone, not just police,” she says. Critics pounce. “Yes, Hillary Clinton called the nation racist,” writes a Washington Times columnist.
Oct. 2016
Attorney General Loretta Lynch says the DOJ will (finally) start collecting national data on police use of force.
Dec. 2016
A jury of 11 whites and one African American deadlocks in the trial of Michael Slager. A retrial is scheduled for late August 2017. A separate federal trial, to determine whether Slager violated Walter Scott’s civil rights, is slated to begin in May 2017. 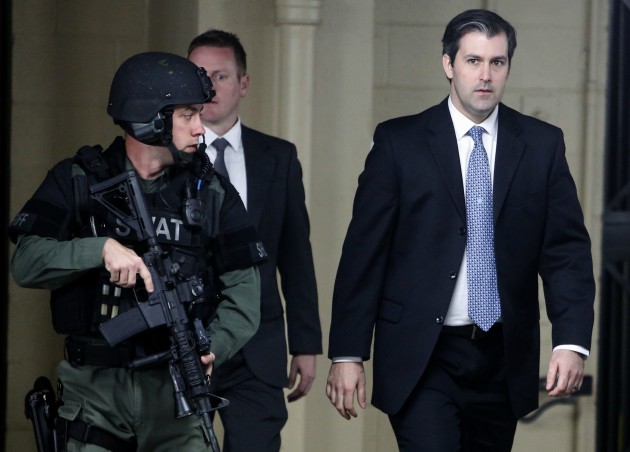 Mic Smith, File/AP Photo
Feb. 2017
In his first speech as attorney general, Jeff Sessions suggests that the Justice Department, under his watch, will discontinue its practice of monitoring police departments suspected of violating people’s civil rights.
March 2017
At a rally, President Trump boasts that NFL teams won’t pick up former 49er Colin Kaepernick for fear of a critical Trump tweet. (Kaepernick, meanwhile, says he plans to stand up for the national anthem this season.) Shots Fired, a drama about police shootings, debuts on Fox. “There were a lot of people who never saw Trayvon Martin as a kid,” one of the show’s co-creators tells Mother Jones. “He was painted as the victimizer, and Zimmerman [Martin’s killer] got donations from all over the country. So in doing a show that deals with police violence, the question was how do we make those people who sent in the donations see this kid as a human being? One of the things we came up with was to make one victim white.”
May 2017
Officer Slager pleads guilty to federal charges of using excessive force and violating the civil rights of Walter Scott. In exchange, South Carolina agrees to drop all state charges against Slager. Sentencing is postponed until a later date. “He may end up in a prison that is more tolerable than what would have been the case in South Carolina,” criminologist Phil Stinson tells Michael Sokolove, who covered the case for an in-depth story in Mother Jones.

This timeline has been updated.