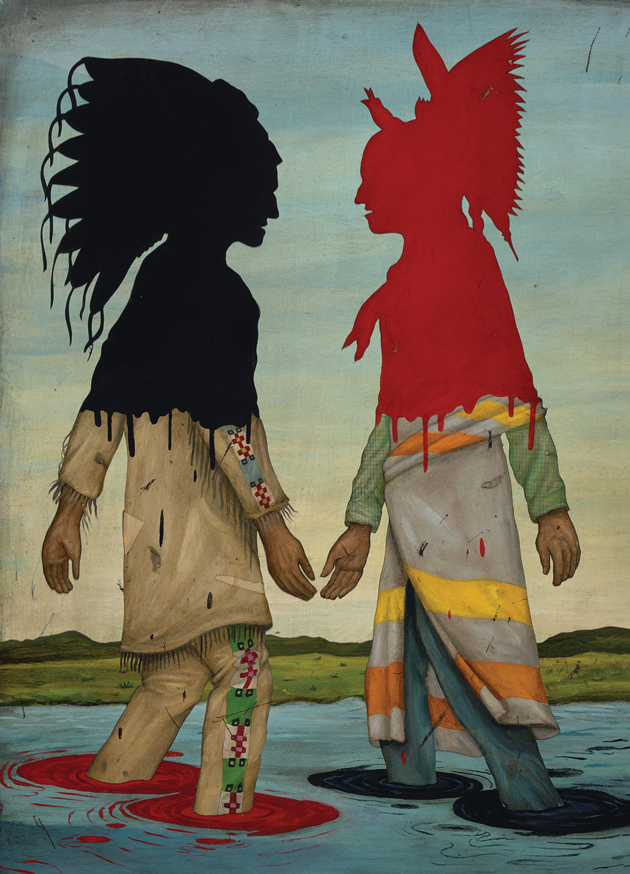 One cold November day last year, Chris Turley, a 28-year-old member of the Osage Nation, set out from the tribe’s northeast Oklahoma reservation upon a quest. He had a wool hat pulled down over his crisply cut black hair and wore military fatigues, just as he had done when he served in Afghanistan as a Scout in the US Army. He carried a rucksack filled with MREs—Meals, Ready-to-Eat—and bottled water, a tent, and a sleeping bag. Tucked away was also an emergency medical kit.

Departing on foot, he headed north through the tall prairie grass. He went past scattering herds of cattle and grinding oil pumps. Thirty miles later, around midnight, he stopped near the Kansas border and made camp in the darkness. He slept in his tent, curled in the cold. In the abruptness of dawn he woke, poured water into a container with premade eggs and quickly ate, and then set out again. The rucksack weighed 80 pounds and his right leg especially burned. In Afghanistan, shrapnel from a rocket-propelled grenade had shivved through his knee. (He received a Purple Heart and a Commendation with Valor, which said his “actions under intense enemy fire when wounded, and courage when facing the enemy in close proximity, not only eliminated and disrupted the enemy but saved the lives of his fellow Scouts.”) Doctors had predicted he’d never walk again without help, but after months of rehabilitation, he did.

“Anyone who knows me knows I am a warrior of this country, I love it with all my heart.”

Now he marched forward, day after day. He entered Kansas, passing through Greenwood County and Brown County—where members of the Kickapoo Tribe invited him to attend a round dance—and continued into Nebraska, until, after hiking for nearly three weeks, he hitched a ride to his final destination: the Standing Rock Sioux reservation. There, on the North Dakota plains, he joined forces with the Sioux who’d been protesting the proposed construction of an oil pipeline near the border of their reservation, fearing it would destroy their sacred burial sites and contaminate their water supply. “Anyone who knows me knows I am a warrior of this country, I love it with all my heart,” Turley wrote on his Facebook page. “I am also a Native of this country and I’m showing my support for Standing Rock.”

For Turley and many other Osage, the fight had a deep resonance, evoking memories of the tribe’s own struggle over oil and land rights during the early 20th century—a struggle that culminated in one of the most sinister crimes in American history. In 2012, when I first visited the Osage Nation Museum, its then-director, Kathryn Red Corn, told me about this mysterious and deadly plot. I was shocked that I had never learned about it in school or read about it in books, and over the next several years I began to try to uncover the depths of the wrongdoing. 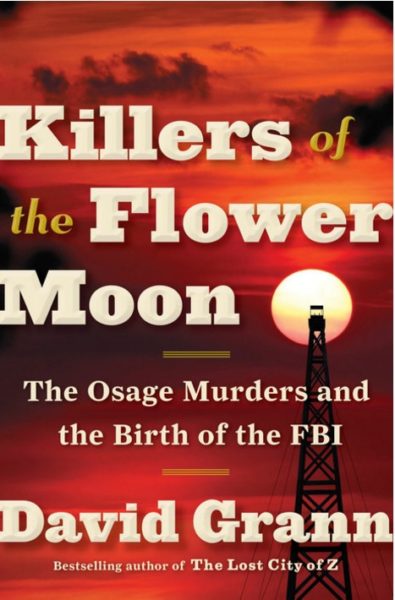 Turley told me that when he was young he had heard about the killings from elder members of the tribe. “Every Osage knows about the murders,” he said. He learned that the Osage once laid claim to much of the Midwest (Thomas Jefferson described them as a “great nation”), but like so many American Indians, they were gradually forced off their ancestral lands. They were driven into Kansas in 1825 and were relocated during the 1870s to the reservation in northeast Oklahoma. By then, their population had dwindled to a few thousand because of massacres and disease and starvation. Although the new reservation was bigger than the state of Delaware, the land was rocky and presumed worthless.

Several years later, an Osage Indian pointed out to a white trader a rainbow sheen on the surface of a creek. It was oil. The reservation, it turned out, was sitting above some of the largest deposits of petroleum then known in America, and to extract that oil, prospectors had to pay the Osage for leases and royalties. In 1906, the tribe granted each of its 2,000 or so registered members a headright, essentially a share in the mineral trust. In 1923 alone, the tribe collected what would today amount to more than $400 million—the New York Times deemed them the wealthiest people per capita in the world. Belying long-standing stereotypes, they lived in mansions and had white servants and rode in chauffeured cars. “Lo and behold!” exclaimed the Outlook, a New York City magazine. “The Indian, instead of starving to death…enjoys a steady income that turns bankers green with envy.”

The extent of the killings was far greater than the FBI ever exposed—there were scores, perhaps hundreds, of murders.

Then, one by one, the Osage with headrights began to be murdered off. During what became known as the Osage Reign of Terror, there were poisonings, shootings, and even a bombing. Several of those who tried to catch the killers were themselves killed, including one attorney who was thrown from a speeding train. As the death toll reached more than two dozen, the Justice Department’s Bureau of Investigation—later renamed the Federal Bureau of Investigation—took up the case. It became one of the FBI’s first major homicide investigations. But for two years, the bureau bungled the case, failing to make any arrests.

Fearing a scandal, the bureau’s new director, J. Edgar Hoover, turned to an old frontier lawman named Tom White, who assembled a team of undercover operatives, including an American Indian agent. In 1926, they captured one of the criminal masterminds—a prominent white settler who had orchestrated an intricate plot to steal the Osage’s headrights and fortune. But, as I discovered from my research, the extent of the killings was far greater than the bureau ever exposed, and there were scores, perhaps hundreds, of murders that went unsolved. The perpetrators absconded with much of the Osage’s fortune, which was further diminished by the Great Depression and the depletion of oil reserves. 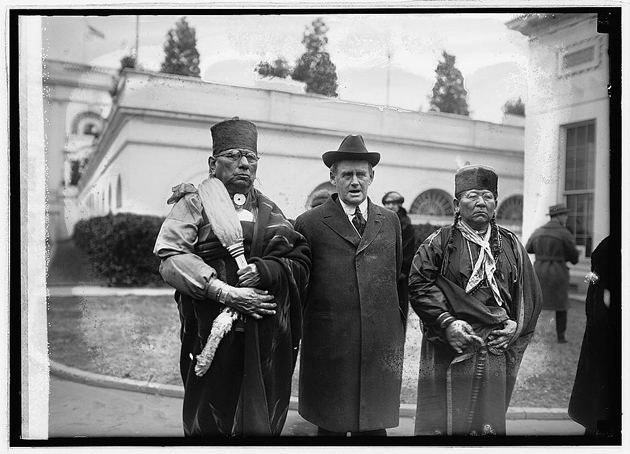 Osage chiefs with Charles Burke, commissioner of the Bureau of Indian Affairs Library of Congress

Turley thought about the Osage murders during the demonstrations at Standing Rock. The Sioux weren’t looking to make money; they were just trying to protect the environment. And yet the struggles came down to the same fundamental issue: the right of American Indians to control their lands and resources. Which is why the Standing Rock demonstrations seemed to galvanize so many nations of American Indians, each with its own bloodstained history, its own saga of incursions upon its sovereignty. Native Americans made pilgrimages to Standing Rock from across the country—from the Round Valley Indian Tribes in California and the Blackfeet Nation in Montana to the Winnebago Tribe in Nebraska and the Navajo Nation in Arizona and New Mexico. Jim Gray, a former Osage chief, wrote on Facebook, “The principle of any tribe’s sovereign right to protect what’s important to them is why hundreds of tribes have sent food, supplies and money to their aid.”

Turley provided security for the “water protectors,” guarding resupply convoys: “It was kind of like a covert op.”

Turley helped provide security for the protesters—or “water protectors”—including by guarding convoys headed off the reservation to resupply them. “It was kind of like a covert op,” he said. When the word came down, on December 4, that the Department of the Army had refused to allow the oil company to build the pipeline, “we all sang and danced,” Turley recalled.

Yet President Donald Trump—who until recently had an investment in the Dakota Access Pipeline—reversed the decision upon taking office. The Sioux are contesting Trump’s action in court, but their legal options are quickly dwindling, and it may become harder for demonstrators to gather in the future: A state legislator introduced a bill making it legal for a person to “unintentionally” run over protesters.

Many American Indian leaders fear that the pipeline is only the beginning of the Trump administration’s attempt to erode tribal sovereignty. Reuters reported that some of the president’s advisers even hope to “privatize” American Indian reservations, fulfilling the old dream of white settlers to open these lands to unfettered development.

Jim Gray says the Trump administration will confront an American Indian movement galvanized and united by Standing Rock. “In the old days, our people didn’t have much of a voice,” he told a rally in Tulsa, Oklahoma, last fall. “Now we do…The world is watching.” As for Chris Turley, he’s back at his home in Osage territory. But if summoned by the leaders of any tribe in need, he says he’s prepared to pack up his rucksack: “I can walk across America.”