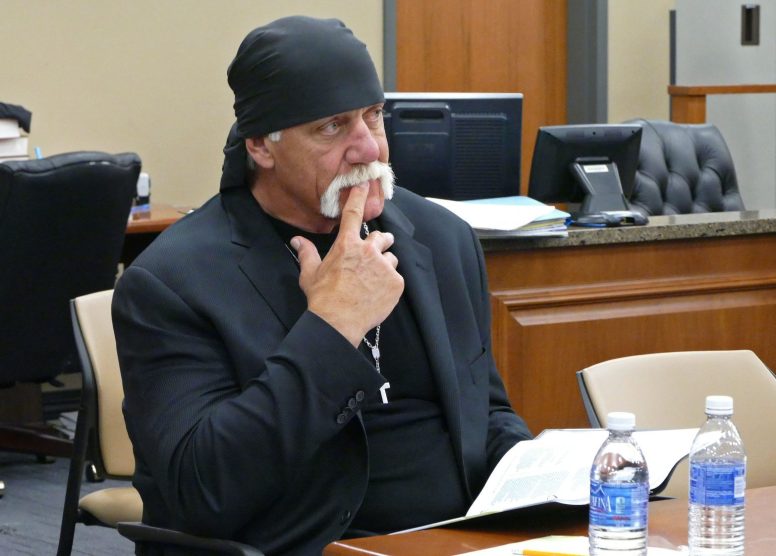 In June 2016, Gawker Media filed for bankruptcy and put itself up for auction. The company’s high-profile demise came after it lost a $140 million libel lawsuit brought by wrestler Hulk Hogan, whose sex tape had made its way to Gawker‘s readers in 2012.

Soon after the verdict, we found out that PayPal co-founder Peter Thiel—a prominent Trump supporter—was secretly funding the lawsuit in apparent revenge for a 2007 Gawker article outing him as gay. Thiel hated Gawker and its family of blogs. In 2009, Thiel said Valleywag, a tech blog owned by Gawker, possessed the “psychology of a terrorist.”

The mogul called the Hogan verdict “one of my greater philanthropic things that I’ve done.”

A new Netflix film released Friday tracks the bizarre twists and turns of the Gawker case and its larger-than-life characters—and what happens when a secretive billionaire takes a big grudge to court and wins.

Nobody Speak: Trials of the Free Press also examines this moment of crisis for American newsrooms facing the dual threats of hemorrhaging revenue and public distrust in the time of Trump—and how the likes of Peter Thiel and billionaire casino-owner and conservative donor Sheldon Adelson can take advantage of the crisis for their own purposes.

I talked to the film’s director, Brian Knappenberger, in New York ahead of the premiere, about making the film—and what America lost when Gawker went away. We’ve edited this interview for length and clarity.

Mother Jones: One thing a lot of people don’t understand about the American legal system is the ways in which it’s okay and legal for anonymous third parties to get involved in litigation. What did you learn about that?

Brian Knappenberger: Certainly it’s the secretive aspect that’s the most egregious, the most troubling. Litigation finance isn’t unheard of. In fact, the ACLU funds cases, and they do it to make a political point, right? But, you know, it’s the ACLU. You know the point: You understand right from the beginning the point that they’re trying to make.

MJ: Can you describe the types of options that were available to Hulk Hogan’s legal team as the result of just having that extra money, and what impact that had on the case?

BK: If you’re a legal team, then you have what is essentially an endless amount of money, and you can plan your defense accordingly. And you know that your opponent doesn’t have an endless amount of money. It’s not a level playing field all of a sudden. Thiel is so rich; I mean, being a billionaire, it’s so much money. And that’s a frightening part of this whole scenario. In the end, they don’t have to win litigation on this. They can just put someone out of business.

“They don’t have to win litigation on this. They can just put someone out of business.”

MJ: People were pissed off at Gawker for tons of reasons. So, do they have a point that Gawker routinely went too far and crossed a line? In any case, that line has now been drawn in the court of law, established by the people of Florida. This is now a precedent.

BK: I mean, there’s no defense of some of Gawker’s stories. The Condé Nast story, I think was really bad. There are really three or four stories that I think went too far. But, Gawker also did great journalism. And the notion that Peter Thiel put forth, that Gawker was a singularly sociopathic bully, right? Now that’s ridiculous.

I mean, think of Facebook. There was a live murder on Facebook last year. One of the most popular stories coursing through Facebook was this idea that John Podesta was running a sex-trafficking ring in the basement of a pizza joint. Gawker: I mean they may have been annoying, they may have been snarky, but they were mostly punching up. They saved most of their venom for a very specific slice of the New York media world. They eschewed access journalism—they thought it was nonsense.

So, the idea that they’re a singularly sociopathic bully is absurd. Alex Jones standing next to journalists is worse than anything Gawker ever did, in my mind.

MJ: Can you draw the line for me through the Gawker case to Trump?

BK: Yeah, I think the Gawker case was a canary in the coal mine. It started early. You saw in trial a kind of hatred of the media, right? You saw even the judge, Pamela Campbell, was saying things about her worries and concerns about the state of online journalism, to the jury and some people found that, frankly, really inappropriate—tipping her hand a little, which she’s not supposed to do.

Then you have Peter Thiel’s defense stand-in. Of course, that was before the RNC, and before he gave money to Trump and before he became part of the Trump transition team. So, you have that.

This trial existed in this backdrop of this very insane election, in which hatred of the media, or criticism of the media, was very much a part of the Trump rise.

Media critic Jay Rosen says something I really love in the film. He says, look, this is billionaires saying, “We are more powerful than the truth.” That the truth itself doesn’t matter. That we are beyond that. That we can kind of control that stuff, so it’s that wielding of money.

MJ: So what can be done about this?

BK: We have to activate people to subscribe to great organizations, to give money to good journalism, find out those voices that do it right.

MJ: Was Trump winning the election good for you, in a way? Were you like, “Yes! I can sell this documentary now to Netflix!”

BK: Well, it was a good ending. I mean, what did CBS say? Trump’s bad for America, but he’s good for CBS!

Count me in. Now I have an ending to the film, I guess. [Laughter] Someone needs to benefit from this.

That’s depressing. I’d rather still be crafting an ending.

MJ: What did we lose when Gawker went away? I’m thinking particularly about whether or not they would have gotten a hold of the Russian Trump dossier earlier and just gone with it and put it out there.

BK: Yeah, I think we lost a lot. There were so many media organizations that were cautious about it. And so it’s a perfect example of the kind of story that Gawker would have gone for, and gone for early. Here you have this salacious material that is being passed around by media elites, right? Everybody, a whole group of people that has seen this thing, but it’s not available to the general public. There’s nobody in the media ecosystem that would have done this with quite the vigor that Gawker would have.

MJ: And the relish.

Knappenberger: And the relish.

Nobody Speak is on Netflix now.