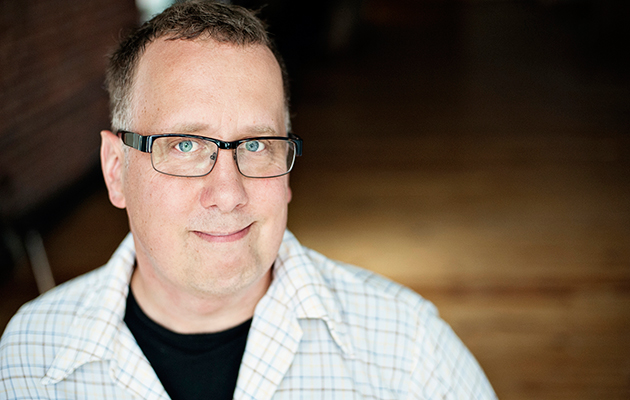 John Moe, host of "The Hilarious World of Depression."Shuttersmack

It all started back in 2010, when the Minneapolis-based author and public-radio producer John Moe was hosting Wits, a live variety show featuring well-known comedians. “I was surprised at how often depression was coming up,” he says. “My reporter brain clicked in and said, ‘What’s the story there?'” After Wits was canceled in 2015, Moe decided to pursue a podcast exploring funny people’s struggles with mental illness. “Comedians are able to describe the experience much better than anybody else,” he says, “because a comedian’s job is to put into really succinct words what people are thinking but not talking about.”

The Hilarious World of Depression, a podcast launched by American Public Media late last year, was a surprise hit, winning a 2017 Webby Award. It’s one part stand-up comedy and one part therapy session (although it doesn’t purport to dispense medical advice) wherein guests such as Maria Bamford, talk show legend Dick Cavett, and Peter Sagal of Wait, Wait…Don’t Tell Me talk about how their chemical imbalances bring them down—and also make them laugh. Moe aims to show people that this “common cold” of mental health disorders, which affects an estimated 1 in 5 adults, isn’t just “for mopey people listening to The Smiths.”

For the show’s second season, which premieres September 25 with an episode featuring actor Wil Wheaton of Star Trek: The Next Generation, Moe sticks with the general theme, but has broadened his pool of subjects to include musicians such as Neko Case and Aimee Mann, and John Green, the best-sellng author of The Fault in Our Stars.

I caught up with Moe in the lull between seasons, during which he kept his fans medicated with periodic mini-episodes—he calls them “placebos.”

Mother Jones: You’re dealing with depression yourself. Let’s talk about that.

John Moe: I started feeling something in junior high—I mean, it’s depressing anyway, but it has to do with puberty and all the body changes.

MJ: How does one distinguish between real depression and teen angst?

JM: It is hard. As best I recall, it was just marked by this sense of chaos—a world out of kilter. It’s panicky, it felt hopeless. I grew up in a time when we were actively told that we were probably going to die in a nuclear war. It was like everybody I know spent their childhood waiting for the bomb to drop. I didn’t actually get diagnosed until well into adulthood.

MJ: What prompted you to seek help?

“There wasn’t a thing I could identify that was making me feel rotten.”

JM: There wasn’t a thing I could identify that was making me feel rotten. My life was going well. I had a good job. I was happily married. We had a house. I thought, “Well, this has got to be in my brain,” so I went to the doctor. They said, almost right away, “Oh yeah, you’re depressed.” It was wonderful to hear that—this thing you just thought was a weirdness has a name and has available treatments.

MJ: Did you worry it might affect your job?

JM: Absolutely. It was kind of a weird circumstance because my brother killed himself in 2007. He felt very alone, very isolated, like there was nobody there for him. I decided then that I need to speak up about depression. I would do tweetstorms on the anniversary of Rick’s death—I do them now on his birthday—encouraging people to get treatment. But I wasn’t being public about the fact that I had done that myself. I felt kind of dishonest. I went to the HR department and I said, “I’m thinking about sharing this [on the air].” They were great. They said, “You absolutely should do this.”

MJ: In the podcast, you talk about how depression has been shamed in our culture.

“We’ve treated mental illness as this exotic thing, where it’s people in padded rooms and people dressed up as Napoleon—just all this bullshit.”

JM: We’ve treated mental illness as this exotic thing, where it’s people in padded rooms and people dressed up as Napoleon—just all this bullshit. You think, “Well, if I own up to having a mental illness, am I going to be committed? Are people going to see me as unstable?” What that stigma fails to own up to is that people with mental illness are your friends and neighbors and co-workers, living regular lives. I get it treated and I’m able to be just as happy as somebody else, and just as sad. I need assistance—that’s the only difference.

MJ: Who do you imagine your listeners are?

JM: People who have this thing in their lives. I’ve also talked with people who say, “I’ve never had this, but my mom has, and I’m trying to understand it.” For a lot of people, it’s just the comedians. If you hear something with Maria Bamford, it’s going to be really funny.

MJ: Do you have a consulting psychiatrist?

JM: We use common sense. If something is mentioned that we think is going to be confusing—like Maria Bamford will mention Depakote—we’ll take a little aside to explain what that is and what it’s used for. Dick Cavett talks about ECT, electroconvulsive therapy, so I had a little aside talking about the differences versus electroshock therapy in the 1950s—they’re very different.

MJ: There’s been a lot of chatter about Trump-related depression. How real is all that?

“I have friends who are at the pinnacle of their comedy career and they can’t get out of bed.”

JM: The depressed people I know are depressed regardless. The disease is a bulldozer. I have friends who are at the pinnacle of their comedy career and they can’t get out of bed or they are thinking about suicide. It just doesn’t matter. Anecdotally, I’ve heard that every therapist in town is booked and they’re talking [about the] election in almost every session. I think it’s been hard for people predisposed to depression who aren’t supporters of the current president, because it reinforces a sense that somebody else is in control and they’re not behaving in your best interests.

MJ: You actually wrote a book about your quest to become a conservative.

JM: I wrote that when George W. Bush was president and there was a growing acrimony in politics. That small campfire has turned into a forest fire now. We’ve started to see this fundamental distrust of the other side—they all have nefarious intentions, and any dialogue with them would be enabling the thing you don’t want to exist. It’s a real breakdown. I don’t know how to solve it.

MJ: Was there anything you learned from that book that helps you process our current predicament?

JM: The big thing was just trying to be a listener and not a talker. I think that’s a good lesson in the age of social media: Every time Trump tweets, you don’t need to respond. He wants you to—that’s the idea.

MJ: Okay, let me turn one of your favorite questions back on you: Is depression funny?

“Paul F. Tompkins said depression is like you have an airplane and suddenly Morrissey has grabbed the controls.”

JM: I think it’s hilarious. Paul F. Tompkins said it’s like you have an airplane and suddenly Morrissey has grabbed the controls. Depression follows so many principles of comedy: It’s man biting dog. It’s a world upside-down. Just these droplets of chemicals in my brain screwing everything up are funny to me. When I’m really down, I find comedy in how pathetic and devastated I am.

I’ll give you an example: We were going out to scatter my brother’s ashes in Puget Sound. We parked at the marina and were heading down to the boat and my oldest sister had the box of ashes. My mom said, “Oh, is it heavy?” And my sister said, “Well, he ain’t heavy—he’s my brother.” We all just started laughing. If he were alive, he would’ve made the same joke. Even if it’s the darkest possible joke, it’s sort of a sign of vitality. It’s a sign of not letting the bastards win.