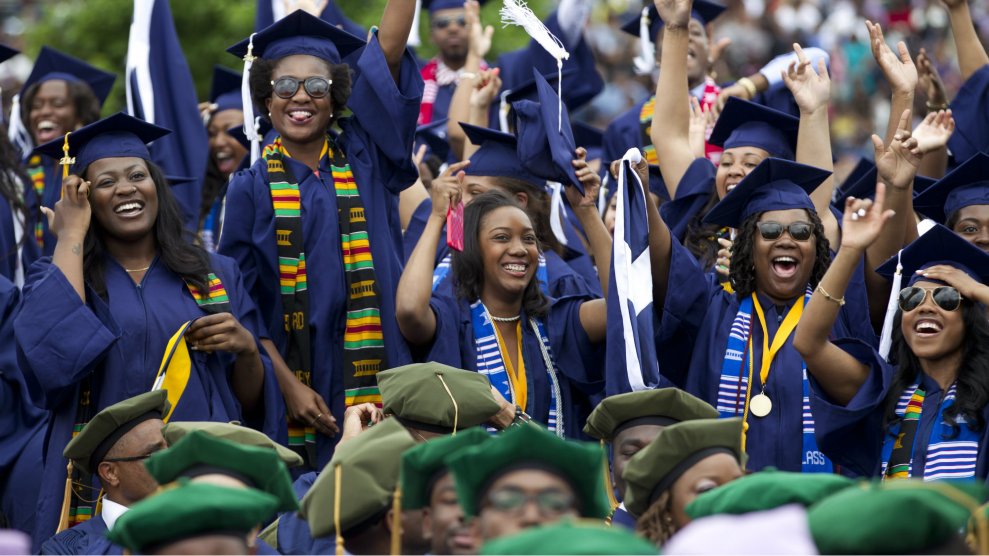 Graduates at commencement at Howard University in 2014.Jose Luis Magana/AP

Historically black colleges and universities made headlines during Trump’s first year, as students pushed back against what they perceived as a racist administration. Last May, Education Secretary Betsy DeVos was booed during her commencement speech at Bethune-Cookman university. And student activists chanted over former FBI Director James Comey’s speech at Howard University—my alma mater—in September. The demonstrations were part of a long history of student activism on HBCU campuses, a history that, until now, had yet to be told on screen.

Tell Them We Are Rising, a new documentary by veteran filmmaker Stanley Nelson (The Black Panthers: Vanguard of a Revolution, Freedom Summer, The Murder of Emmett Till), is the first feature-length documentary on the history of these institutions. Premiering on PBS on Monday, February 19, the film takes a look at the schools’ inception as slavery drew to a close, their evolution over the 20th century, and the integral role they’ve played in black social movements.

Mother Jones: Why this film, and why now?

“If [my parents] hadn’t gone to black colleges, they couldn’t go to college.”

Stanley Nelson: A few reasons. One, the African American community has had few institutions that sustain it: The black church. I made a film a few years ago about black newspapers. And black colleges and universities—there has been nothing that has been more of a catalyst for African Americans to enter the middle class. I didn’t see people lining up to tell the story. I kind of felt like if I didn’t tell it, nobody would. On a more personal note, my mother went to Talladega College and my father went to Howard in the 1930s. If they hadn’t gone to those colleges, they couldn’t go to college. So it changed the trajectory of my family, and so many other families.

MJ: What parts of the HBCU story did you think were most important to communicate?

SN: We set out to cover about 170 years of history in 90 minutes. We figured the best way to do that would be to tell stories. I felt it was really important to start during the time of enslavement, when education was denied to African Americans, because that’s kind of the framework of the whole film. We go into, then, the first HBCUs that are formed after the [Civil War] and into Booker T. Washington and his debates with W.E.B. DuBois. Our mission was for each piece of the story—there’s seven or eight chapters—to convey something different. The first chapter is the denial of education and the importance of education. The Booker T. piece was sort of, which way is education going to go? I found it fascinating that Booker T. Washington was arguably the most powerful black man in the country at that time, and he’s a college president. He’s being propped up in many ways by Southern planters and the Northern industrialists. And then we go into the idea of the New Negro—when African Americans return after World War I and say we want something different.

MJ: You recently released “Black Colleges in the Age of Trump,” a short film for the New York Times, which looks at the politics of Trump and HBCUs. Did you feel the need for a a supplement to Tell Them We Are Rising?

SN: HBCUs have been in the news over the first year of Trump more than they had been in the 20 years prior. So we felt there were a lot of people around the country—black and white—who might be scratching their heads, thinking, “What the hell is going on?” So we felt there was a real opportunity to bring the film up to the present.

MJ: What’s your take on where HBCUs are now, after one year of Trump being in the White House?

“For African Americans, HBCUs have provided our only safe intellectual space in this country.”

SN: The administrators of HBCUs are in many ways between a rock and a hard place. They depend on the federal government for their money, but Trump is so toxic to the black community. Students have traditionally led their universities and colleges in protest, and many times have been out in front of the administration. We hope that they continue to do that. As we say in the film, HBCUs have been critical to so many of the movements that we’ve had as African American people—because of students, always, who fight for change. So that’s how the piece ends. I hope it continues. We need that now more than ever. For African Americans, HBCUs have provided our only safe intellectual space in this country. That’s what they have been, and that’s what they are now.

MJ: The film touches briefly on the precarious financial situation—many HBCU’s are in danger of closure. What is important for people to understand about why we need these schools nowadays?

SN: Brown v. Board of Education would have never come out of Harvard. The sit-in movement would have never come out of Stanford. These things come out of African American institutions for a reason—and we need that more than ever. Also, if you just go through the statistics, the statistics are insane—black judges, black dentists and doctors, a huge proportion of black lawyers, are graduates of HBCUs. A huge number of black people who go on to get engineering degrees come out of HBCUs. And we can’t even talk about it because we don’t have a framework to talk about what it is culturally that HBCUs represent. It’s hard to qualify that. In making this film, as a I traveled around, I could tell a young black person who graduated from an HBCU from one who didn’t. I think I would be right 90 percent of the time. You spend four years being affirmed in who you are. There’s a difference. And I think that’s really important.

MJ: HBCUs tend to have smaller endowments than predominately white schools, so they depend heavily on tuition dollars. Today, many of them are recruiting as many students as possible—of different races—to bring in more money. I graduated from Howard in 2015, and we could see a shift in racial demographics on campus then. A conversation we had was—how many nonblack people is too many? And at what point do you have to start thinking about a de-centering of blackness on your HBCU campus. Any thoughts?

What I hope the film does is bring to young African Americans that this is a choice.

SN: I think the private institutions [like Howard] probably don’t have to worry. Howard is still blackity black black black. The ones that will change are some of the public institutions where people are realizing they can get an education for a lot less money. So there are a few HBCUs that now are majority white, or majority nonblack. Probably, in the long run, some of the 100 or so HBCUs will disappear. We went to a couple of HBCUs that were literally right next to each other. Would those be better combined? Probably. So some will disappear, but hopefully the ones that are here will be strengthened.

MJ: There does seem to be a lot of interest in HBCUs among black high school students right now.

SN: You have an increased racialized environment, a president who has let the dogs out and has opened the doors to some of the worst instincts in this country. It seems to me, and to so many African Americans, that this was always there under the surface. People are now feeling emboldened. The increase in black enrollment—they call it the “Missouri effect.” People want a safe space. Young African American people are saying, “I want four years where I’m not judged by the color of my skin every time I enter a room. I just want four years of peace.” And I understand that. What I hope the film does is bring to young African Americans that this is a choice. Put this into that hopper when you’re figuring out if you want to go to college, where you want to go to college, what you want to go to college. Put this in for consideration. That’s all.