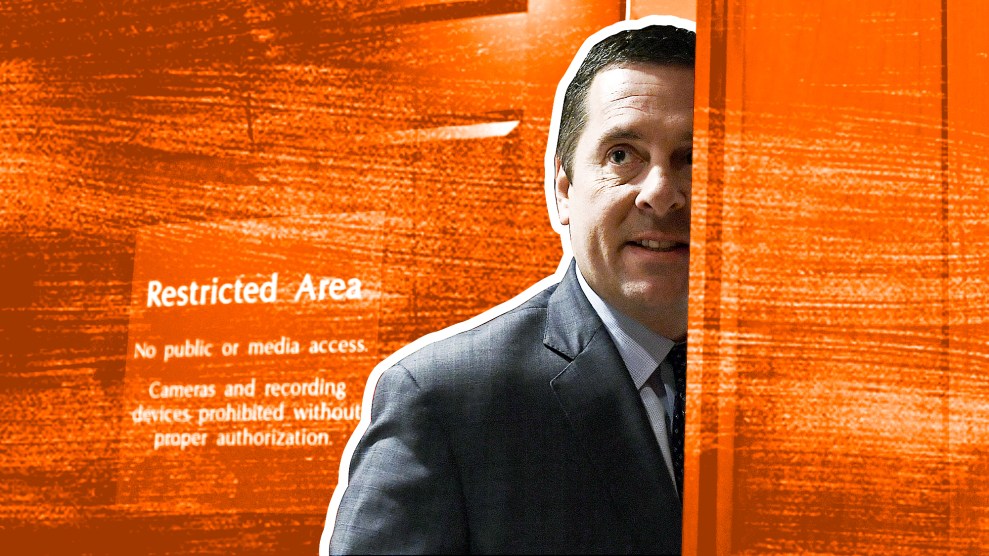 It’s a weird feeling when your organization’s reporting ends up at the center of a scandal bordering on constitutional crisis. But things have been weird, and here we are: MoJo‘s October 2016 story about the Steele dossier is a key data point in the Nunes memo (though they couldn’t even get the date right—more on that later). That inclusion, and how it came to pass, tells us a lot about journalism, propaganda, and what democracy is up against.

Let’s unpack that a bit. First, propaganda: Perhaps the most remarkable aspect of the Nunes episode is how effectively it followed the playbook of contemporary disinformation campaigns. A few months ago, my colleague Denise Clifton dug up an extraordinary RAND Corporation study that found a distinctive pattern to Russian propaganda, repeated in many settings and countries.

On the first two: Noise about the Nunes memo has been deafening since congressional Republicans launched (and Russian bots amplified) #ReleasetheMemo only a couple of weeks ago. The news cycle spun into overdrive with each Trump tweet, each “deeper than Watergate” comment, each attempt by Democrats in Congress to push back. There have been, according to our quick search of the Muck Rack database, more than 3,500 stories on the memo in that time frame, or 233 per day. As MoJo blogger Kevin Drum noted, “This was always a show for the media. And it worked great.”

As for “lacks commitment to objective reality”: We can’t fully ascertain how reality-based the memo is because Republicans won’t release the underlying documents (which Nunes himself is open about not having bothered to read anyway). But here’s a detail that’s easy to fact-check: The memo refers to how MoJo‘s Washington bureau chief, David Corn, broke news of the Steele dossier on alleged Trump-Russia connections—and gets the date of the story wrong. Our fact-checkers would never get away with so obvious an error, but who cares, right? ¯\_(ツ)_/¯

The last two weeks have seen 233 stories a day about the Nunes memo. How many about Russia targeting the midterm elections?

As for “lacks commitment to consistency”: It’s hard to overstate what an affront to consistency this whole charade has been, perhaps nowhere more so than in the claim that it was simply about getting the facts to the public. A cherry-picked narrative with no documents, no sourcing, no hearings, no witnesses, even as its purveyors refuse to let the public see a competing version? Please.

We’ve seen this movie before. Back in the 2000s, when the tobacco industry was forced to reveal how it buried evidence that smoking kills, one of the documents released was an amazing 1969 memo by a tobacco executive. He wrote:

Doubt is our product since it is the best means of competing with the ‘body of fact’ that exists in the mind of the general public.

Just as in 1969 with tobacco, the public understands the basic Russia-Trump facts quite well. Whether or not there’s a smoking gun showing that Trump personally colluded with Russian emissaries, it is well established that he and his allies enabled Putin’s attack on America’s election at every turn—and have protected the perpetrators ever since. It was only a few days ago that the administration flipped the bird to Congress, saying there’s no need for sanctions against Russia, even though lawmakers said, overwhelmingly, that there is. (Not to mention the list of Russian oligarchs that they cribbed from Trump’s favorite business magazine.)

In the absence of a credible case, Trump’s protectors are left with the “doubt is our product” strategy—create so much chaos that at least some portion of the population will conclude you just can’t figure out where the truth is. ¯\_(ツ)_/¯

It worked for tobacco—but only for a while. Today we know full well how that industry profited from selling a product that kills. It took a lot of people to get there; the courts, state attorneys general, activists, and journalists. (MoJo was on the story early—one of my favorite covers in the archives is this one, from way back in 1979:)

Back then, our reporters resisted pressures both economic (tobacco was one of the biggest revenue sources for magazines at the time) and political. We did the same last fall, when other outlets were pooh-poohing or dismissing the Russia scandal. And we’ll keep doing it this time, when the stakes are higher than ever before. When the majority in Congress abdicates its responsibility to rein in the executive branch and instead uses its power to attack investigators and spread misinformation, the press has to do its watchdog job like never before.

But… it still isn’t. As David noted, while the Nunes story sucks up all the oxygen, few people have focused on the danger brewing in the background: In 2016, Russian hackers not only targeted the presidential campaign, but also stole key documents about critical House races.

Moscow’s assault on the [Democratic Congressional Campaign Committee] was an extensive operation that had an impact. In several House races, candidates used the leaked material to attack Democrats. (In primary contests, Democrats exploited the leaks against Democratic rivals. In the general election, Republicans did the same.) DCCC officials came to believe the dumps were a decisive factor in several races in which the Democrat lost.

[This year], Russian intervention in a handful of critical races could mean the difference between a House that continues to protect Trump and undercut the Russia scandal and a House that challenges Trump and digs aggressively. So there could be much incentive for Moscow to resort to its dirty tricks again.

This threat from Russia should be in the headlines—more than the antics of Nunes. Democrats ought to be publicly demanding more information… and pressing Trump on what is being done to prevent a repeat of 2016.

Remember: 233 stories a day about the Nunes memo for the last two weeks. How many about Russian interference in congressional elections?

Authoritarians, dissemblers, and propagandists fear nothing more than investigators they can’t intimidate, and they resent nothing more than the public absorbing facts they can’t control. If you’d like to help MoJo‘s nonprofit newsroom keep investigating and getting the facts out there, please consider making a tax-deductible donation. Let’s not slow down now.