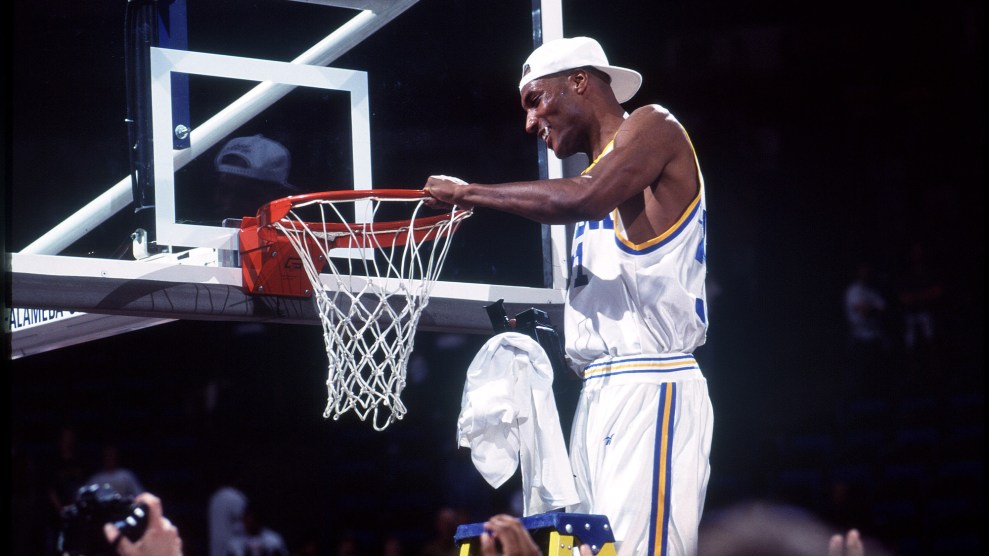 Ed O'Bannon cuts down the net in 1995 after UCLA defeated Arkansas in the national championship.Icon Sportswire via AP

Long after the end of a storied college basketball career and a short stint in the NBA, Ed O’Bannon saw a version of his former self inside a video game. It was April 2009, and a friend’s nine-year-old son had grabbed a copy of EA Sports’ NCAA Basketball ’09 and started playing. On the screen was a 6-foot-8 basketball player at UCLA who wore number 31. As O’Bannon recalls in his new book, Court Justice: The Inside Story of My Battle Against the NCAA, his friend—who, like O’Bannon, was a former college basketball player working at a car dealership—told him, “It is kind of crazy you’re not getting a penny from it, but that’s life. What are you going to do, you know?”

A month later, Sonny Vaccaro, a renowned former executive at Nike and Adidas, called O’Bannon to see if he would be the lead plaintiff in a case against the NCAA. That call set off a nearly decade-long lawsuit seeking to stop the college sports governing body from profiting off the images and likenesses of its college athletes.

In 2014, a federal judge in California ruled in O’Bannon’s favor, finding that the NCAA’s amateurism rules violated federal antitrust laws and ordering the NCAA to pay men’s basketball and football players. The payment wouldn’t be much: up to $5,000 per year beyond the cost of tuition, room and board, and other expenses, and not paid out until after graduation. The 9th Circuit Court of Appeals would later affirm the ruling but determine that schools should pay athletes only up to the cost of attendance, scrapping the additional payment. The US Supreme Court then declined to hear the case, allowing the appeals court ruling to stand. In 2015, the same California judge who oversaw the O’Bannon case approved a $60 million settlement between Electronic Arts, which produced the EA Sports college video games, and players.

O’Bannon sees his lawsuit as the first step toward fair compensation for college athletes. It also serves as a blueprint for a flurry of other cases challenging compensation limits that could change the way the NCAA operates, including one from prominent attorney Jeffrey Kessler that would remove all barriers to compensation for Division I athletes. O’Bannon believes that college athletes should be fully compensated for their work. “They’re earning the money that the colleges and the NCAA are lining their pockets with,” he says.

Last week, Mother Jones spoke to O’Bannon on the phone about his book, his fight against the NCAA, and the future of student-athletes.

Mother Jones: When you were a basketball star at UCLA, did you think changes needed to be made to how the NCAA treats student-athletes?

Ed O’Bannon: I always thought that there were changes that needed to be made. But I mean, how often do they change? Never, you know? The NCAA, they won’t voluntarily change rules that ultimately line their pockets. So why would they change? It’s a business. While on campus, you recognize that rules need to change but you don’t really say anything because you’re taught to work hard on your craft, work hard in the classroom, and keep your head down, keep your mouth shut. Athletes are guided in that direction. I recognized it when I was there, but I didn’t do or say anything about it.

MJ: What did you think needed changing at the time?

EO: I remember having the typical conversations of not having money. There was a time when I needed a ride to my dorm after practice, and it’s raining outside, but the coach couldn’t give me a ride because that’s against the NCAA rules. It was just small little things like that that came into play. You notice them, but you don’t really say much about them because they’ve been in place for years and they will continue to be there. As a teenager or young adult, you complain about it, but you don’t say anything. It’s all with your teammates because they’re all in the same boat.

MJ: How did those moments as a college athlete, those questions that you had, inform your decision to pursue this lawsuit?

EO: If an athlete can bring in money to a school but doesn’t get paid, that goes against the foundation of what this country was built on. That is, if you go out and you work, you should be compensated for your work. At one time, having a scholarship was enough, evidently. Now that the athletes are making billions of dollars for the universities as well as the NCAA, those rules need to change. Now, a scholarship isn’t enough.

On top of that, the NCAA also has rules in place where athletes can’t work while on scholarship. If I have a pretty good game three games in a row and Burger King wants to use me in a commercial, rules say that I can’t do that because I’m on scholarship. Yet the actor that I have class with, they’ve got a movie coming out and they’re doing publicity for it and they’re getting paid for the movie and they’re getting paid for all the commercials that they’re in. Yet we sit next to each other in class. That just isn’t right.

MJ: How do you think your lawsuit ultimately helped former college athletes like yourself?

EO: I’m not sure. As long as this lawsuit’s been going on, we’re still in the early stages. Things are changing but they’re still staying the same. They are moving at a snail’s pace. I’m sitting in this LA traffic, and we’re going about as fast as NCAA changing rules. That’s really where we are.

MJ: What movement have you seen the NCAA making in ensuring that athletes can be compensated for their image and likeness in response to this lawsuit?

EO: None. I haven’t seen any as far as that.

MJ: How do you feel about that?

EO: It sucks. They should take a harder look at that. They won’t unless the players step up. [NCAA Commissioner] Mark Emmert and the NCAA, they make way too much money. For them to just voluntarily divvy it out to the actual athletes that are bringing it in—it’s not going to happen unless the athletes step up and say either you pay us or we’re not going to play.

MJ: In your book, you write, “Athletes whose labor and likeness generate the vast majority of money from college sports are mostly black, and colleges knowingly adopt rules to not pay those athletes.” What role do you think race plays in how the NCAA treats its athletes?

EO: It plays a big role. The majority of athletes that play football are black, yet you have a three-year rule before they could even make money. They have to have gone to school up to their junior year before they can turn pro. Basketball is the same thing with one year, and the majority of those athletes are black. Yet in hockey, it’s not like that. In baseball, you can get drafted out of high school and enter directly into the pros, minor leagues most of the time, but you are a professional athlete. Is that a coincidence? I don’t know. I don’t think so.

MJ: What do you think is left to be done in this fight for the rights of college athletes?

MJ: What do you want to see changed in how the NCAA treats its student-athletes?

I was a history major. Not a whole lot of interest in history, but I was interested in the sports that I was playing. When I say major in sports, it’s not like P.E.—you go to class, you dress up, and you get an A. I’m talking about understanding how the body works and learn the analytics of the game. It is why you’re there. You wouldn’t be on campus if you weren’t special in that sport. You might as well learn the ins and outs and get credit for it. Guaranteed health benefits for the athletes. The NCAA can improve their rules. Take out some of those stupid rules like the first one that I talk about, giving a ride to a player. I mean, come on.

Maybe the athletes can get a seat at the table with the NCAA when they’re making up some of these stupid rules. Then the NCAA will realize that the rules that they have in place are dumb. You ask the actual athletes what they want and how can their lives on campus improve, you know?