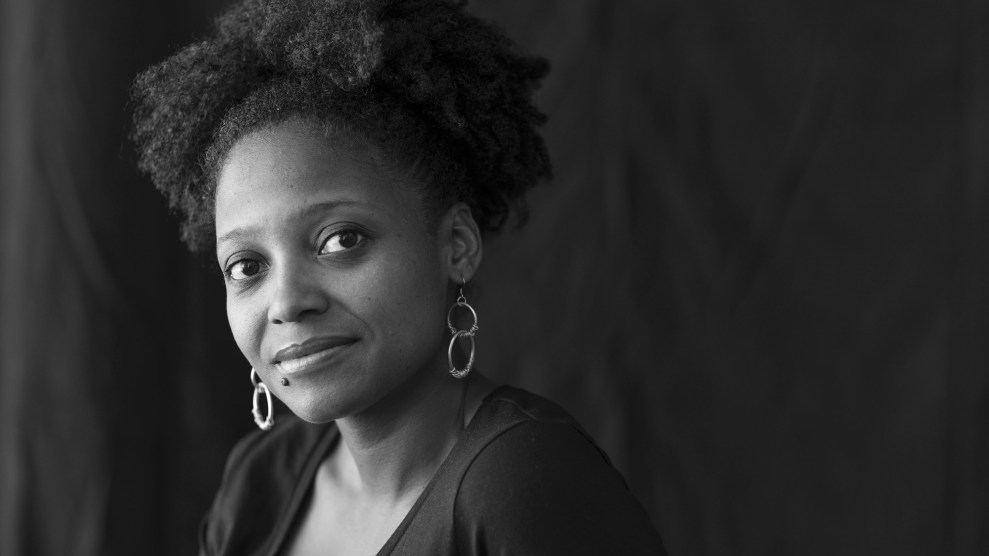 Back in 2012, Princeton professor Tracy K. Smith won a Pulitzer Prize for the poetry collection Life on Mars. But her highest distinction came last year, when Smith, 46, was named US poet laureate. Wade in the Water, her latest book, deftly covers 250 years of the American experience, from the refugee’s plight to a company’s toxic spill to the complications of black motherhood. The slim, potent volume, out this week, includes “found” poems drawn directly from letters between slave owners and from black Civil War soldiers seeking redress—Smith visits these hauntings on her readers without ever sounding didactic or preachy. In conversation, she reveals herself as a soulful teacher intent on using her stature to mend the nation’s oldest divisions.

Mother Jones: As poet laureate in a time of political upheaval, what do you see as your responsibility to the people?

Tracy K. Smith: I see it as saying this thing, poetry—language being applied as fearlessly as possible in pursuit of many-faceted emotional truths that we live with—is useful, humanizing. This voice that made a stab at naming something that maybe you have felt, too, makes the world more real and makes us more capable of recognizing each other.

MJ: How has your own work functioned as that sort of bridge?

“It’s really exciting when somebody says, ‘You’re black, I’m white. You’re from one place, I’m from another. And yet your mother in this poem is my mother.’”

TS: I’m working on an opera drawing from the history of land ownership in the South, and so I was visiting coastal Georgia with historian Erskine Clarke. He read my memoir before we met, and he said, “Seeing [the way] you’re stirring the cheese into the grits, I know that!” And somehow, all of the distances between us—his age, his culture, his gender, his generation—suddenly got really small. That can happen as often as we’re willing to let it. I sometimes feel anxious in the South because I don’t know what my role is. It’s really exciting when somebody says, “I don’t know your mother. You’re black, I’m white. You’re from one place, I’m from another. And yet your mother in this poem is my mother.”

MJ: Tell me about your mother and father.

TS: They were born in Alabama in the mid-’30s, both from big rural families. My father joined the Air Force—that’s why my childhood was spent in California. My mom was deeply faithful and believed that instilling in our family a sense of duty and trust in God would do a lot to counteract all of those forces telling me that you’re small, you don’t matter—because you’re black. My dad was an engineer, a meticulous man who was fascinated by how things were made, how systems operated—as interested in the natural world as he was in science and technology. So there was this beautiful sense of curiosity and wonder that brought to our home an order.

We were taught to be respectful. I think it wasn’t until my brothers and sisters were in college that we stopped calling my dad “sir.” He died in 2008, and I remember my siblings and I saying his life for us can be divided between when he was Dad and when he was Floyd. It was a moment when he felt that he had succeeded in raising us. My mom passed away when I was in my early 20s, so I didn’t have that adult relationship with her. A lot of my memoir is really about trying to find who she might have been beyond who she was to me growing up.

MJ: Does your father’s passion for engineering factor in when you’re crafting a poem?

TS: Maybe. I was wrapping Christmas presents and my sister was visiting and I said, “I think of Dad every time I do the presents so beautifully.” He really loved making things—he used to make furniture. So maybe you’re working through feelings and questions in the first draft, and then you’ve got to start sanding down the edges and make sure everything’s squared off. I know a lot of poets whose parents are engineers.

MJ: My mother and stepfather are both engineers! I can’t wrap a present or pack a dishwasher or pack for a trip without thinking about them. I find it coming up in my stanzas as well. How could I be more efficient? What’s the value of a word as opposed to space?

MJ: In parts of the book, you relinquish the spotlight to the voices of others. Was it difficult for you to step aside?

“Most antebellum history has to do with white stakeholders. There are very few even names of the enslaved.”

TS: It was sort of involuntary. I hadn’t written many poems after Life on Mars and I was invited to write one about the Civil War for the National Portrait Gallery. I had to find material that was interesting to me—maybe in the experience of black soldiers and their families. Most antebellum history has to do with white stakeholders. There are very few even names of the enslaved.

I was reading Dwelling Place, Clarke’s book. He’s done a lot of work to re-create the black version of this time period as it rips through a family. There are all these letters from the Charles Colcock Jones family about how much they love to bid on slaves and how much a chore they are to maintain, and “What are we going to do with these people? They’re starting to want things for themselves that don’t line up with our priorities as slaveholders.” Reading these letters, there’s another story. I wanted to find what’s between these lines, and so the poems came out of that. What was really compelling about the Jones family is that they struggled with, “Okay, should we get rid of this institution?” And ultimately they decided, “We’re going to tell ourselves we can educate the enslaved through religion and sort of assuage our anxiety.” But the further they got into this lifestyle, the further they got from Christianity.

MJ: When I read your poem “The Greatest Personal Privation,” I was physically angry. I felt as if I were carrying the burden of the speaker as well as the burden of the enslaved. How do you keep your head about you as you delve into this horrific material?

“My anger, frustration, indignation, and certainty are going to be damaging to the poem if I give them free rein.”

TS: My anger, frustration, indignation, and certainty are going to be damaging to the poem if I give them free rein. I have to find a way of letting the language guide me to understand that I am as complicit in what is wrong with a situation as I am certain of what is right. If a poem can’t do that, then it doesn’t feel honest. If I use my moral convictions like a crutch, like a stick to point out, “This is bad,” then the poem is doing nothing more than just being, I don’t know, what I might say at a dinner party.

The Civil War poem, “I Will Tell You the Truth About This, I Will Tell You All About It,” was heavy lifting because it’s taken verbatim from pages of letters. Even the spelling was the same. I went through with the highlighter and said, “Okay, here, here, I hear a statement here.” Almost like dowsing. But dowsing brought forth the emotions you talked about: How could anyone think this is acceptable?

MJ: The New York Times wrote that you plan to use your poet laureate position to be a “literary evangelist” and hold events in small towns and rural areas. Why prioritize those places?

TS: I’m eager to get a sense of what poetry means in places where there aren’t literary series, festivals, and universities bringing writers through. It is a huge priority. It’s going to start in various communities in New Mexico: a military base, a Native American school. These conversations, I hope, will be different.

MJ: If poetry were a small town, where would it be and what would it need?

TS: I love the metaphor of that question.

MJ: When you interview a poet, you gotta bring the metaphors!

TS: It would be in a place where there are animals living near people and trees that seem to have old stories they could transmit. But it would also have to be characterized by a darkness—a place that has a legacy of loss or something connected to shame. When I think about poems, I think about the fact that they literally require a studious quiet. You have to really curate the space to hear them speak the urgent yet quiet things that poems say. It would have to be a place that could foster that. I’m not saying cities aren’t poems, but there’s something that gets drowned out.