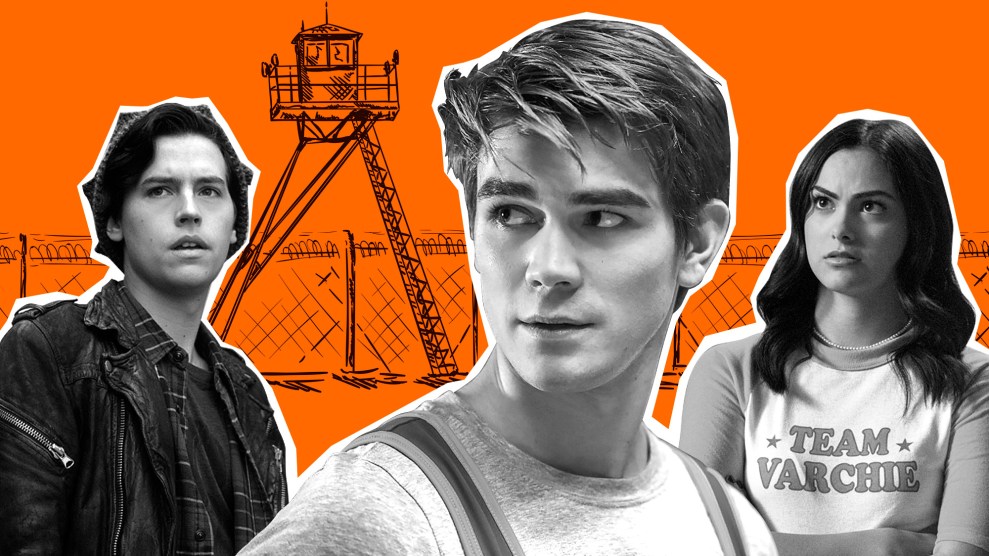 You’d be forgiven for never having seen an episode of the CW’s soapy drama Riverdale, but you’d be missing out. It has the typical teen fare—steamy love triangles, heated campaigns for class president—but, as of late, it has also taken on more political topics. As the dark take on the Archie comics (yes, if you’re unfamiliar with the show, you read that right) enters the final stretch of its second season, a proposal by a wealthy family to take a rundown school in Riverdale’s “bad” part of town and replace it with a for-profit private prison has residents divided. The Lodge family, who has already bought the town newspaper, trailer park, and local diner, tout their plan as a good thing that will bring jobs and opportunity to the community, but some characters aren’t buying it. When patriarch Hiram Lodge revealed his plan in an earlier episode, Jughead Jones, editor of the school newspaper and a budding conspiracy theorist, ups the ante in his long-running crusade against the Lodges, frantically working to stop the nefarious plot before the Lodges take over all of his beloved town.

Some (or many) of Riverdale‘s storylines may be unbelievable—the family feud over a maple syrup empire, an FBI agent enlisting a dopey teenager to take down a mobster who is (spoiler) just a goon for said mobster’s family, the statistically improbable number of redheads in one friend group—but a small town getting turned upside-down by a private prison is anything but fiction. Jughead’s campaign against the Lodges may be melodramatic, but he has every reason to be anxious.

The effects of private prisons on the towns they occupy vary. Proponents say they can inject money into a struggling economy and create needed jobs. But it’s not that simple. On the surface, the prison may deter potential residents or visitors turned off by the physical presence of incarceration. In addition, the jobs it creates aren’t particularly desirable: The pay is low, the hours are long, the work can be dangerous, and turnover is common.

That said, it’s not so hard to fathom why the Lodges are set on bringing the prison to town. They’d be in charge. Private prisons, unlike state-run facilities, can use nonunion workers (and pay them lower wages) and aren’t as constrained by government rules about their construction. Legislation like the Prison Industries Act broadened the type of work prisoners can do while incarcerated, which in turn generated profit for the state and prison companies and led to a private prison boom in the 1990s, with facilities run by private companies like CoreCivic and GEO Group cropping up in small towns from Texas to Montana to Virginia. Those ownership groups make billions annually.

These side effects are familiar if you’re a Mother Jones reader. We’ve been investigating prisons, specifically private ones, for years, and in 2016, we published a blockbuster undercover investigation into a private prison in Louisiana, where our reporter found widespread abuse and a lack of oversight.

In case Jughead needs a resource, here’s what could happen to Riverdale if the Lodges get their way:

A big slice of Jughead’s ire toward the Lodges is that to build the prison, they are closing Southside High, a school on the wrong side of the tracks that’s mostly attended by members of the local gang, the Southside Serpents. The displaced students have already been sent to Riverdale High, presumably crowding the halls and stretching resources thin. Although there are few examples of a move like this, in 2013, 23 Philadelphia public schools (most in low-income minority neighborhoods) were closed at the same time the state managed to pay for a $400 million state prison complex. Despite the fact that private prisons are generally cheaper to run, it still costs a lot of money to bring one to town, which can siphon cash from other things like education and infrastructure that need the funds.

Although I would like to think Sheriff Keller wouldn’t do something like this, many private prison contracts include a “lockup quota,” which mandates that a certain amount of beds in a facility are filled at all times. This incentivizes policymakers and the justice system to focus on incarcerating people rather than looking for long-term solutions to reduce mass incarceration. A similar example of this would be the “Kids for Cash” scandal, where two Pennsylvania judges were found in 2009 to have accepted kickbacks for years from private companies running juvenile detention centers in exchange for sending kids there by doling out harsh sentences, often for minor offenses. Sorry, Serpents.

Riverdale won’t get many new residents

Riverdale is the kind of idyllic small town that can only exist on TV, where football players strut around in letterman jackets, a retro diner is the hub of social activity, and literally everyone is attractive. Imagine what a prison could do to its family-friendly reputation (the recent string of murders and looming threat of mob violence notwithstanding). A 1992 study, published around the start of the private prison construction boom, found that proposals to build prisons and other unappealing properties like landfills often face fierce opposition due to the reputational damage they can inflict on a community—unless the economic opportunity of building such a structure is high, which, as some towns find, it often isn’t. Earlier this year, residents of Elkhart, Indiana, successfully warded off the construction of a huge private immigration detention facility, arguing that its presence would repel desperately needed new workers and residents.

Despite the supposed benefits of opening a prison in a struggling small town, sometimes a lack of prisoners leads them to close. In 2011, a small Texas town auctioned off a detention center for half of what it paid for it to be built after it had been vacant for two years. It had closed due to a lack of prisoners after Idaho, which sent many of its inmates there, pulled out of its contract. Hardin, Montana, a tiny town that built a private detention facility in 2007, was left in worse straits than before when the prison, left empty for long stretches over a decade, was closed. Sometimes, what is supposed to be a source of prosperity can destroy the already precarious economy of a small town. Given the division among Riverdale residents, it seems that building a prison would cause the town more problems than it already has—unless, of course, they manage to find the murderer(s) terrorizing the town. But I’m not holding my breath.