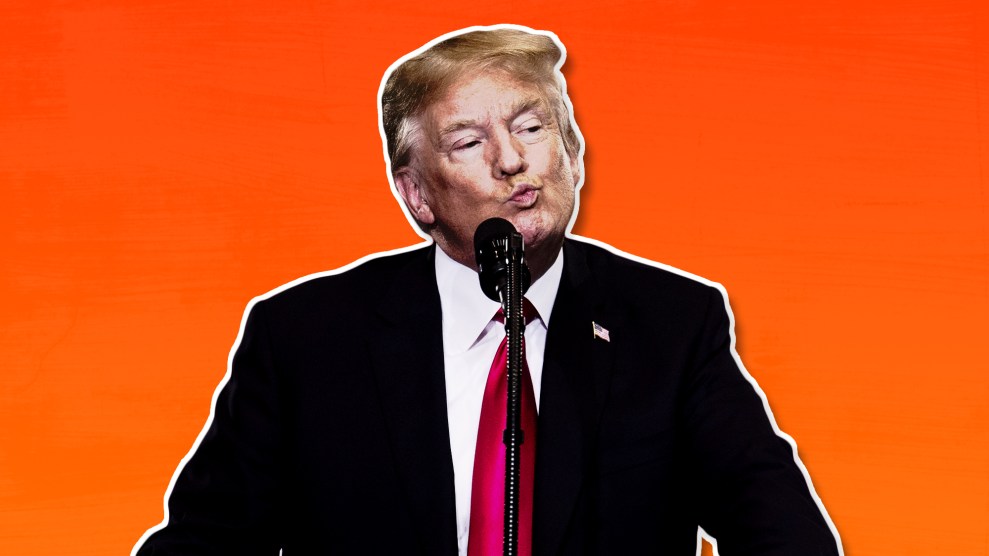 “He has his imperative to discredit, to delegitimize, the scandal and the investigation,” David tells Mother Jones senior editor Aaron Wiener, who hosts the podcast’s weekly segment on the Russia scandal. “And he’s right: It does taint his victory. It does call into question even to a certain degree his legitimacy as president.”

Trump’s relentless messaging (“Witch Hunt!”) cuts through the minutiae of the investigation, much in the same way “Crooked Hillary” brutally simplified his 2016 campaign message. “Unfortunately, he’s the one with the bullhorn,” David says. “There’s no one on the other side who is looking to talk in basic terms to keep pressing—every day—the essence of this scandal.”

Also on this week’s show: Host Jamilah King talks with reporter Pema Levy about one of Trump’s staunchest supporters. No other Fox News host appears to be more influential on the Russia investigation and the “deep state” than Jeanine Pirro. Pema recently wrote of Pirro’s sway with the president this way, in her in-depth profile:

The influence of Pirro and other Fox hosts has sometimes left White House staffers scrambling to control the damage. Trump’s aides have reportedly had to put out fires that Pirro lights; during her Oval Office meeting with the president last fall, Trump’s chief of staff, John Kelly, told Pirro that she wasn’t “helping things.” (Meanwhile, other top White House officials deliberately pushed Trump to spend more time watching Fox because he was growing so agitated by what he saw on CNN and MSNBC, New York magazine reported.) The White House press team appears to have incorporated Pirro’s show into its communications strategy, regularly dispatching spokespeople to appear on the show—partly because Trump is watching, according to the Washington Post, and partly to prevent the president from calling in himself, as he did earlier this year. Trump has also granted Pirro several exclusive interviews.

Listen to Pema explain Pirro’s extraordinary rise from failed political candidate to Trump confidante. “She seems to have really come into her own on TV,” Pema says. “And this a moment, frankly, that is sort of made for her. It’s made for people that are willing to do anything it takes to be close to Trump, and to support him, and that he will make them shine.”

And finally: It’s been a year since Trump announced that the United States would pull out of the Paris climate accord. Mother Jones environmental reporter Rebecca Leber fills you in about what’s going on inside the Environmental Protection Agency, from its aggressive deregulation to the ethics scandals threatening to engulf Scott Pruitt, the agency’s head.

You can also subscribe using any of the following services: