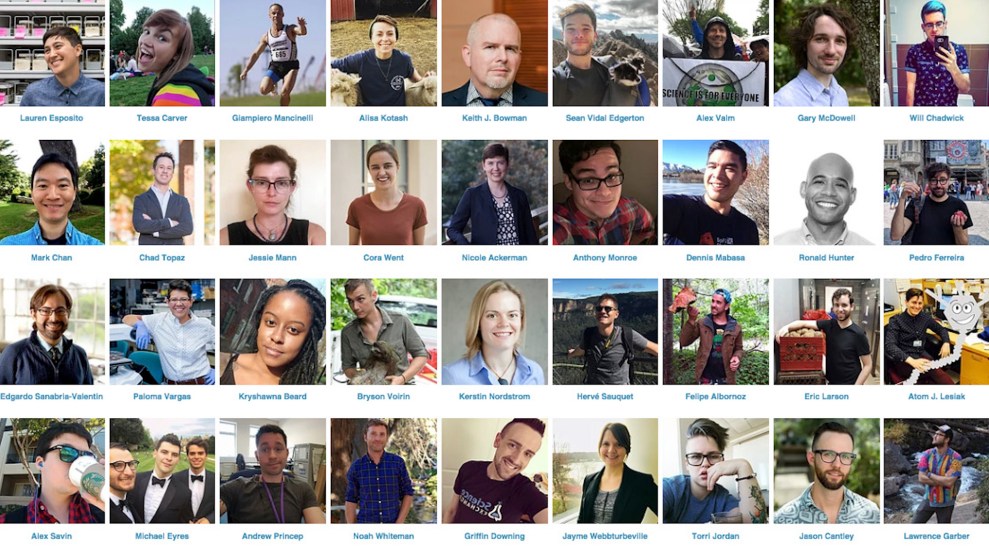 Riding in on the rainbow wave of Pride Month, 500 Queer Scientists made its debut Monday as part database, part visibility campaign of LGBTQ people in STEM fields. With dozens of smiling queer faces against laboratory and outdoor backgrounds, the campaign—exclusively online at the moment—aims to promote inclusivity in science.

“I would say that queer people are definitely in the shadows at conferences and in terms of involvement with professional organizations,” says co-founder Lauren Esposito, curator of arachnology at the California Academy of Sciences. “Either they’re not out or they just keep their personal life totally hidden in a professional context, which is something their straight colleagues just don’t have to do.”

Indeed, the campaign’s press release includes some statistics: For one, it notes, more than 40 percent of LGBTQ+ respondents in a 2013 survey of American STEM workers said they were not out to their colleagues. And a recent study in the open-access journal Science Advances concluded that STEM fields are doing a poor job of retaining sexual-minority students. LGBTQ+ scientists have also been historically barred from professional organizations and conferences, and research on certain queer issues remains underfunded to this day.

500 Queer Scientists is modeled on 500 Women Scientists, a nonprofit that aims to promote women in STEM and an informal partner of the new campaign. Esposito says she is inspired by how community-driven the women-centric group is—it began with a letter and grew into an international organization with local chapters. Similarly, Esposito wanted to let the queer community take the reins of 500 Queer Scientists: “I decided just to limit the scope of this to just a visibility campaign and let the community decide where it goes,” she says.

It’s had a great start. 500 Queer Scientists opened with 60 scientists featured on the website and closed its first day with double that, Esposito says. People submit entries that are manually reviewed, copyedited, and published. It’s laborious, but the process is designed to prevent spam—none yet, “knock on wood,” says Esposito.

“The response from the community overall has been really exciting and energizing,” Esposito says. “I think both LGBTQ+ people and allies from the scientific community have been excited about this and about highlighting the diversity of science, and that’s going to be a good thing.”

“I am queer and I am an arachnologist. // I’m the Schlinger Curator of Arachnology at the California Academy of Sciences, and the co-founder/director of a science, education, and conservation nonprofit called Islands & Seas. My research focuses on documenting the world’s arachnid biodiversity and understanding the patterns and processes that lead to the diversity on Earth today. I live in the gayest city in the World, San Francisco, with my partner and two kids.”

“I am gay and I am a sloth scientist, neurobiologist, and tree climber. // I am a neuroscientist, sloth biologist, professional tree climber, and television presenter. I love exploring the natural world and investigating the mysteries of our planet. My husband and I have been together for 11 years, and have conducted research together around the world.”

“I am gay and I am an infectious disease biologist and science illustrator. // I work as an evolutionary biologist and science illustrator at the California Academy of Sciences, in San Francisco, California. As a biologist I study the evolution of viruses and infectious diseases of wildlife. As a science illustrator under “The Pen & the Pangolin” I bridge the gap between my love of art and science. My artwork stands in the service of science and for the purpose of education, while focusing on endless forms most beautiful, threats to biodiversity, organisms poorly understood, without a voice, and in dire need of our conservation efforts. I live in the Haight with my puplet Laika, where I also work as a freelance science/wildlife illustrator in my studio. If not in the city I’m most likely camping and backpacking around California.”