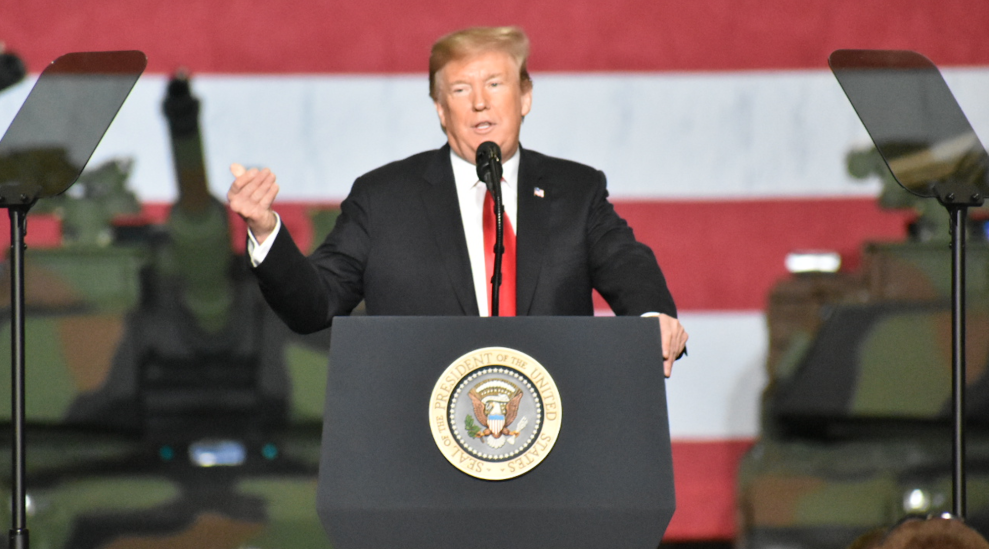 President Donald Trump has drawn rare, bipartisan condemnation this week after he revived his attacks against the late Sen. John McCain—first over the weekend on Twitter, then on Tuesday when he told reporters that he was “never a fan” of McCain, and once again on Wednesday during a visit to an Ohio tank plant when he expressed bitterness for not being thanked for supposedly approving the “kind of funeral” the Arizona senator had wanted.

“I gave him the kind of funeral that he wanted which as president I had to approve,” Trump told the crowd of factory workers in Lima, Ohio. “I don’t care about this. I didn’t get a ‘thank you,’ that’s okay.”

Trump’s remarks did not appear to receive a warm reception. His claim, that he alone had approved the logistics of McCain’s September funeral, was also immediately disputed, with many pointing out that it was the responsibility of Congress to arrange the burial proceedings for the six-term Arizona senator.

Trump just dumped on McCain again at the Ohio rally to dead silence.

Got some boos against McCain when he mentioned the dossier.

But the line fell totally flat.

“I really can’t believe Trump is beefing with a dead man—and losing,” the Daily Show‘s Trevor Noah said during a segment on Wednesday. “Who’s he going to go after next? ‘Albert Einstein, big dummy. How can E equal MC? They’re different letters!”

Trump’s renewed feud with McCain, who before his death had been a frequent and harsh critic of both the president’s behavior and policies, also attracted rare condemnation from Republicans this week—though some were less direct than others.

“It’s deplorable what he said,” Sen. Johnny Isakson (R-Georgia) said during a radio appearance Wednesday. “That’s what I said on the floor of the Senate seven months ago. It will be deplorable seven months from now if he says it again, and I will continue to speak out.”

Former California Gov. Arnold Schwarzenegger said that Trump’s attacks were “twice as unacceptable” in McCain’s death than they were when the senator was alive. “I just think it’s a shame that the president lets himself down to that kind of level. We will be lucky if everyone in Washington followed McCain’s example because he represented courage.”

Even Sen. Lindsey Graham, who shared a close relationship with McCain but is now a fierce Trump ally, criticized the president for the harsh comments, arguing such attacks “hurt him more than they hurt the legacy” of McCain. But he offered to continue helping the president.

Other Republicans have been less direct in their rebukes, opting instead to praise McCain while still not criticizing the president.

Today and every day I miss my good friend John McCain. It was a blessing to serve alongside a rare patriot and genuine American hero in the Senate. His memory continues to remind me every day that our nation is sustained by the sacrifices of heroes.

GOP senators up in 2020 have been mostly mum about Trump’s attacks on McCain; today Martha McSally – who is sitting in McCain’s seat – praised McCain’s service and legacy but didn’t call out Trump by name