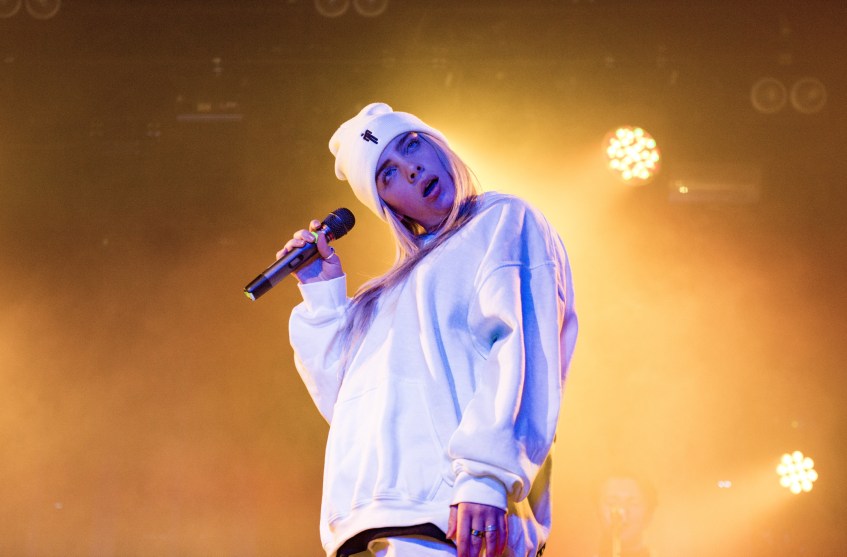 Dropping “Ocean Eyes” on Soundcloud a few years ago, 15 year-old Billie Eilish never expected it would lead to an impressive cult following and a well received EP, don’t smile at me. And yet, it did. The EP introduced a young new artist who was doing her best to redefine the alt-pop genre, in her many memorable tracks. Songs like “bellyache” mixed acoustic guitar strums with intriguing beats, “&burn” paired Eilish with Vince Staples into an explosive and perfectly produced feature. Then there was “party favor” a satisfying contrast of the joyful ukulele juxtaposed with heart-wrenching lyrics. This all brought an artist with enormous promise who inspired high expectations into the mainstream.

Well, the long awaited debut LP WHEN WE ALL FALL ASLEEP, WHERE DO WE GO? finally dropped last week, and it’s time to reassess those expectations. Overly melodramatic and completely lacking in self-awareness, the LP is full of tracks that don’t have much to offer. Eilish and her brother/producer FINNEAS may have created an album that superficially sounds unique, but with a close listen, it’s clear that in terms of authenticity and depth, they fail to deliver.

To give some perspective on this, probably the best track on the album is the opener, “!!!!!!!”, a 13-second immersion in the experience of Eilish slurping and taking out her Invisalign. It’s difficult to differentiate “xanny,” “8,” “listen before i go,” “i love you,” and “goodbye,” from each other. The cringey lyrics flow relentlessly through tracks like “xanny,” and “listen before i go.” The most interesting aspect of “wish you were gay” is that it gets worse with each listen.

“xanny,” could have been an introspective reflection by someone experiencing the self-destructive behavior of their peers. Instead, it comes off as self-righteous, self-indulgent, and dismissive. In “listen before i go” Eilish tries—and fails—to musically explore the agonies of depression and suicide. Rather than wrestling with the intense and existential hopelessness of wishing to take your own life, Eilish opts to romanticize it. “Tell me love is endless, don’t be so pretentious/Leave me like you do.”

I wish the dangerous tendency to romanticize suicide was the only low point on the album. Eilish, perhaps unintentionally, uses the idea of queerness as an excuse for her own inability to handle being rejected. “I just kinda wish you were gay/To spare my pride/To give your lack of interest an explanation/Don’t say I’m not your type/Just say that I’m not your preferred sexual orientation.” Eerily reminiscent of Katy Perry’s homophobic “Ur So Gay,” it’s a narrative many LGBTQ+ people are too familiar with: straight people using our queerness as the butt of a joke. She’s unapologetic. “The whole idea of the song,” she told PopBuzz, “it’s kind of a joke.”

In the end, only two tracks of the 14 are worthy of a listen at all. “bad guy” utilizes Eilish’s trademark creepy whisper-pop in a work that is aware of itself lyrically and complicated in its production. Even “my strange addiction,” which would take the crown as the best track on the album is undermined by the unusual and unfitting The Office samples. Nonetheless, Eilish’s delivery is firm and clean, her voice dances along a groovy beat.

Together it all reads like an especially bothersome, utterly oblivious Tumblr post—“you should see me in a crown” is literally inspired by a Sherlock episode. That same lack of awareness is what prevents the melodrama from being either ironic or emotionally resonant. Instead, it becomes something silly and trivial, like a bad story-line on Riverdale. Coupled with her inability to tastefully address narratives of importance, it’s all is too rough to ignore.

WHEN WE ALL FALL ASLEEP, WHERE DO WE GO? is an example of how impeccable pop packaging can nonetheless conceal and sell an empty, even insulting, product. It’s also evidence of what pop music sounds like in the hands of a stereotypical gen-Zer. This may be a genuine reflection of who Eilish is, but it also reflects more broadly some of the worst parts of the oversharing internet. Are they one and the same? This album seems to think so.

When you aren’t sufficiently self-aware to lean into the stereotype, you become it, and this is what happens here. Eilish comes off as so preoccupied by trying to create her own genre, she ends up replicating a personality and persona that comes straight from wince-inducing “skater boi” posts. It’s not that there’s no promise, there’s lots. Now we just need to wait and see if she’ll redeem herself and fulfill her early potential, or just inhabit the two-dimensions of a walking internet persona.