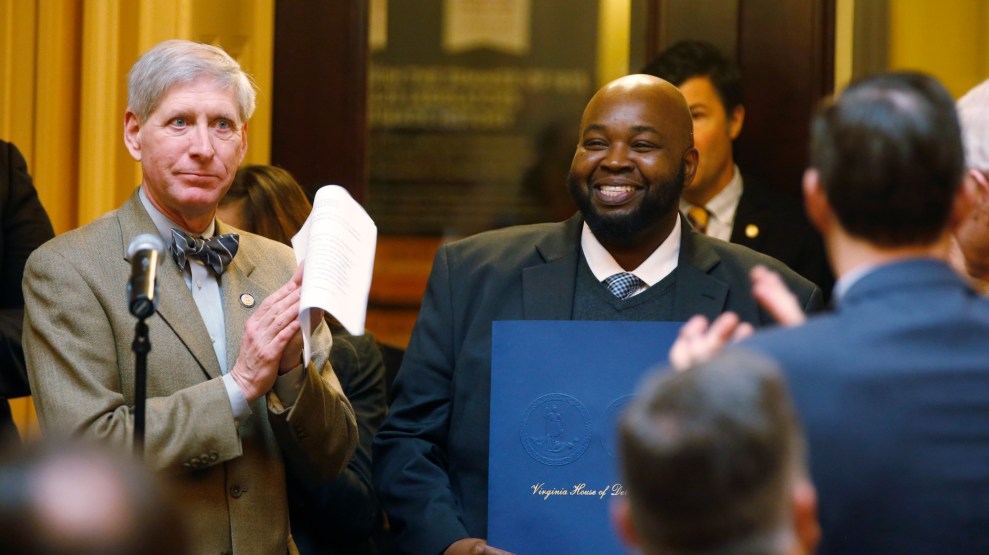 Rodney Robinson on the floor of the Virginia House of Delegates.Steve Helber/AP

Rodney Robinson picked up part of his philosophy on education from his mother, who ran an in-home day care.

“She always taught us that every child deserves the proper amount of love that he or she needs,” the Virginia educator told CBS News. “That was my first lesson in equity.”

That’s what Robinson has done in 19 years as a teacher in Richmond, Virginia, first in traditional schools and now at a school in the city’s juvenile detention center.

Robinson will spend the next year traveling the country with two messages: Impoverished students need more resources, and students of color need more teachers who look like them. Robinson himself only had one black teacher through high school. At the detention center, he plasters the walls of his classroom with leaders of color to inspire his students.

At his school, Robinson specializes in outlining second chances for those who have made bad life decisions. “Our job is to give them hope,” Robinson told the Richmond Times-Dispatch.

President Trump, who skipped the official ceremony led by Education Secretary Betsy DeVos, later invited Robinson to an Oval Office chat in which he extolled the teacher’s efforts to help juvenile offenders find a new path for their lives.

Jason Kamras, superintendent for Richmond’s public schools, said Robinson has a powerful message of equity, inclusion, and justice. “As Rodney has so powerfully demonstrated with his work, our greatness as a country comes from the millions of people of all backgrounds who strive every day to right the wrongs of the past so we can become a more perfect union.”

He’s also is in tune with his students, said Doron Battle, a former pupil at Robinson’s previous school. Battle recalls a lesson on the World War II battle of Normandy where Robinson showed scenes from Saving Private Ryan to make students feel the material.

“He had a way of bringing it all in and made things he was telling us come to life,” said Battle, now a Richmond teacher himself.

Here are some other Recharge stories to get you through the week.