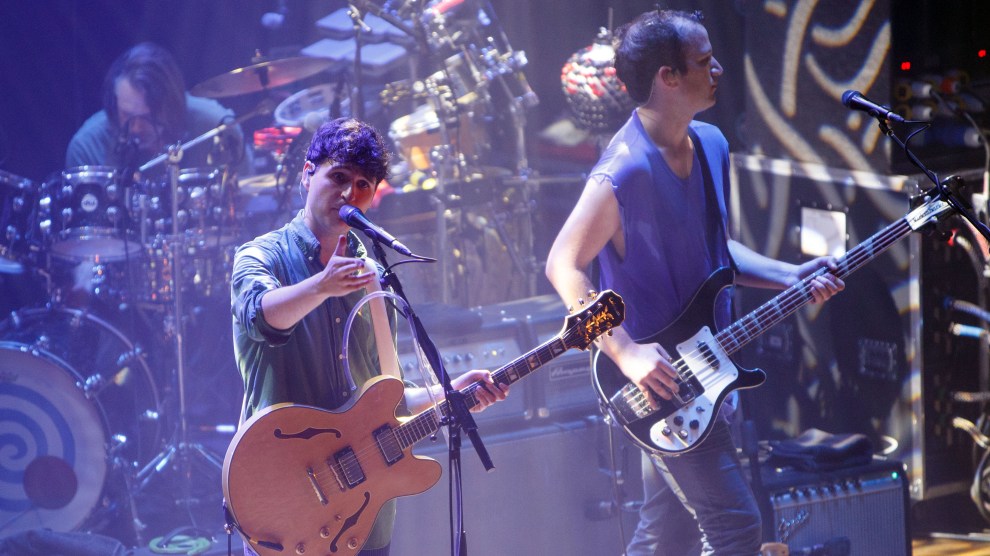 When I was a college student in New York City, I learned early on that Vampire Weekend, whose music I worshipped in high school, was uncool. Too pretentious, too cryptic, too privileged, too white, they were a band no one of conscience or taste could admit to liking. They were a product of Columbia University, our elite uptown neighbor, and were reserved for private listening with headphones instead of party playlists.

And yet, the band’s latest album, Father of the Bride, is something different. Both meaningful and irresistibly likable, this is a version of Vampire Weekend even blasé NYU kids can admit to adoring. Here, the band eschews the haunting sounds and obsessively existential lyrics of its third album, Modern Vampires of the City, and brings back the peppy beats of its debut album—this time with the musical experimentation and self-awareness absent from previous releases.

They immediately confront their reputation in a track called “Unbearably White.” Having dispensed with this, they then try to move beyond it by tackling deeper themes with odes to change, nature, and spirituality.

I can count white excellence on one hand and it includes Stranger Things season one, Bruce Springsteen’s “I’m on Fire,” and this new Vampire Weekend album

In Father of the Bride, Vampire Weekend uses its eponymous preoccupation with death and time as an opportunity to meditate on climate change. “Don’t Lie” from Modern Vampires of the City questioned the universal fear of death from the perspective of an individual (“I want to know, does it bother you?/The low click of a ticking clock”), but “How Long” on the latest album asks a more topical question: “How long ’til we sink to the bottom of the sea?” A line on “Spring Snow” starts as a reference to a Beatles’ classic but soon turns worrisome: “But here comes the sun, those toxic old rays.” The threat here is not the obliteration of an individual’s consciousness, but of the entire species. What meaning can we find in life, when “the seasons we had don’t mean anything”?

The album goes into unexpectedly deep philosophical meditations on how religions, which predated the climate catastrophe, could provide solace. The lyrics suggest that human industrialization could be the modern equivalent of Eve eating the forbidden fruit. In the refrain of “Harmony Hall,” the album’s lead single, Koenig sings, “And the stone walls of Harmony Hall bear witness/Anybody with a worried mind could never forgive the sight/Of wicked snakes inside a place you thought was dignified/I don’t wanna live like this, but I don’t wanna die.” The green snake that slithers through the song’s music video and the cartoon snake that forms a spiral on the album art could be seen as the serpent that tricked Eve inside the otherwise tranquil Eden, the first disruption of paradise that leads us to where we are today. If the connection seems untenable, listen again to “My Mistake”: “Unaware of the fall/Unaware of my fate/There was peace in the valley/’Til I made my mistake.”

Despite the emphasis on human stupidity and obliviousness, the upbeat music suggests the possibility of redemption. The more lighthearted songs are, as The Internet’s Steve Lacy says on the intro to “Sympathy,” “not that serious.” Koenig samples music from all over the world (could the album cover’s similarity to Paul Simon’s Graceland be intentional?), from a Melanesian choral song on “Hold You Now” to Haruomi Husono’s ambient music—originally played in Muji stores in the ’80s—on “2021.” Tracks like “Sympathy” and “Jerusualem, New York, Berlin” make explicit the album’s world peace aspirations, finally extending the scope of Vampire Weekend’s lyrics beyond its previous fixations on love, death, and grammar.

While a wide range of sound and the use of autotunes, synthesizers, and samples galore underscore the theme of world unity, they are also responsible for some low points. “We Belong Together” so brims with love as to be cloying, and “Rich Man” is a weak attempt at irony on an otherwise refreshingly earnest album. But on the whole, Father of the Bride offers tracks that repeat in the listener’s head, unearthing meaning with each successive listen. It is, at last, unpretentious, the result of genuine wonder at the world. It may even be—bear with me here—cool.