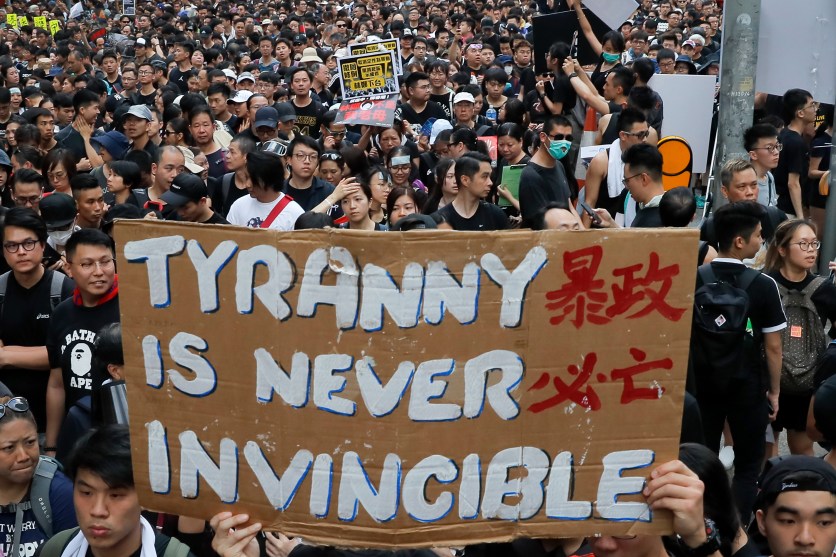 Tens of thousands of people march through the streets of Hong Kong in protest to an extradition bill on June 16, 2019.Kin Cheung/AP

Who wanted to legalize the seizing of people off the streets and their forced removal to mainland China?

Not the people of Hong Kong, who have rallied to make it resoundingly clear that they want to preserve their democracy and human rights, which have greater protections than those of people in mainland China.

In astounding demonstrations, people in Hong Kong forced the former British colony’s unpopular leader, Carrie Lam, to delay indefinitely an extradition law that would have permitted the forced relocation of its people to mainland China. Lam apologized to her constituents Saturday and again on Sunday, when organizers said nearly 2 million people swelled the streets to call for the permanent shelving of that proposed law—and for the resignation of the pro-Beijing Lam.

“One week ago, our future was dark. But now I can see so many people here supporting our protest,” Casper Ng, a 22-year-old student at the Hong Kong Design Institute, told the Los Angeles Times on Sunday. “So I think our future will be bright. But we need to keep fighting for our democracy and freedom.”

The protests, during which police used rubber bullets and tear gas against protesters, shook the Asian financial center, which switched from British to Chinese leadership in 1997 with a promise to maintain democracy and autonomy from Beijing.

“They want to send a message to Beijing,” Willy Lam, an adjunct professor at the Chinese University of Hong Kong, told the New York Times. “If Beijing wants to do something that really infringes upon Hong Kong’s basic value, Hong Kong people will turn out in force, again and again, to pour out their discontent.”

Here are some more Recharge stories to get you through the week:

I’ll leave you with this sunset from Minnesota’s Voyageurs National Park, courtesy of the Interior Department’s Twitter feed. Have a great week ahead!

You're going to love watching the sunset from your boat at Voyageurs National Park. Pic by Aaron Billberg (https://t.co/7u0uZGuWtK) #Minnesota #FindYourPark #GreatOutdoorsMonth pic.twitter.com/Z2ma9NDyt7