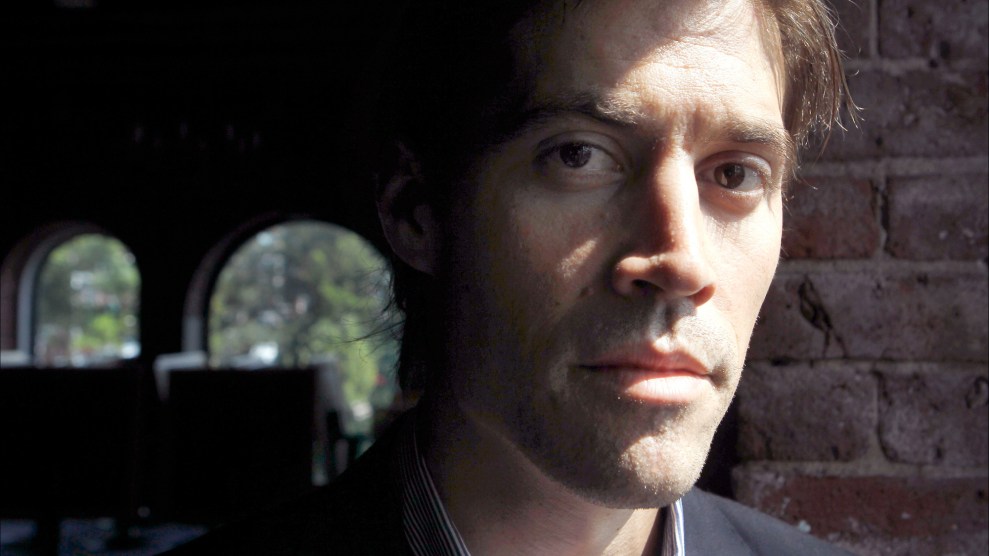 James Foley, a 38-year-old former prison literacy teacher, went to Syria in 2012 to cover a civil war in which the United States was a major player—and which Americans were largely ignoring. He believed in the power of witnessing, and in the human capacity for empathy. “Journalism in a war zone should not be just about conflict,” says Charles Sennott, a veteran foreign correspondent who was one of Foley’s editors. “He had the most extraordinary talent to tell the story of the people caught in the middle of it.”

It’s an impulse that has always motivated journalists to head into the line of fire, from WWII Europe to Vietnam, Central America, Iraq, and Afghanistan. Foreign bureaus were a fixture even at regional papers like the Baltimore Sun and the Boston Globe. They were America’s eyes on the world. At its peak, international news filled 10 percent of newspaper space and 45 percent of news broadcasts.

Sennott was among them. He’d been a police reporter at the New York Daily News in 1993, and one night he headed downtown to check out a report of a loud bang. “Everyone kept saying, it’s probably a generator that exploded. It’s really a remarkable fact that in 1993, no one’s first thought about an explosion was ‘terrorism.’”

Sennott had stumbled onto the beginnings of a defining 21st-century story—the first World Trade Center bombing. He filed a story that night, but his editor told him to dig deeper, and the research took him to New Jersey, then Sudan, then Egypt. “I was a New York police reporter knocking on doors in Sudan,” he recalls. “These international stories explain what is happening to us back home.”

But by the time Foley headed into Syria, America’s newsrooms were very different places. Few editors were in a position to assign a reporter to head overseas to explore the global ramifications of a local story. Foreign reporting and investigative journalism were being cut as advertising revenue dried up.

“It’s a full-on house on fire for all of journalism. The roof was foreign coverage, and then it burned through the floors and now we’re into the foundation.”

Yet editors still wanted international coverage, especially from war zones. And so they turned to freelancers. Where media companies previously paid for salaries, insurance, and security, a freelancer would shoulder all that while earning a few hundred dollars—or in some cases, nothing—for a story or a photo.

One of those freelancers was Shane Bauer, whose special report on what Americans are doing in Syria is publishing on our website today.

Like Foley, Shane first headed to the Middle East because he knew there were stories to be told that Americans were no longer seeing. We got a pitch from Shane in April 2009, about how the United States was paying off warlords around Fallujah. It was a good story, and we assigned him to do it right away. We didn’t talk about his safety—he’d already done the reporting and returned to his home base in Damascus—and that was a typical arrangement at the time. Freelancers made their own decisions; editors focused on the story, not the risk.

Shane’s story, The Sheikh Down, was slated to be published in late August 2009. On August 3, we learned that Shane, along with his friends Sarah Shourd and Josh Fattal, had been arrested by Iranian security forces while hiking in northern Iraq. (You can read their account of the ordeal that followed here.) Shane was held, mostly in isolation in Tehran’s notorious Evin Prison, for 26 months. The Iranian government wanted concessions to release him, Sarah, and Josh, but the US government was not too interested in negotiating.

The three were ultimately released after the sultan of Oman provided the $1.5 million “bail.” But by the time Shane got out, in 2011, an even more dangerous dynamic had taken hold. Hostage-taking was becoming a big part of the business model for militias and terrorist groups. The New York Times’ Rukmini Callimachi calculated in 2014 that Al Qaeda and its direct affiliates had made at least $66 million from ransoms in just one year, with payments as high as $10 million. It was understood that most European governments would pay, but the United States would not; Obama administration officials even warned Foley’s family that they could be prosecuted if they arranged a payment. ISIS murdered Foley, and another freelancer, Steven Sotloff, in the summer of 2014; at least 139 journalists, most of them local, have died in Syria since 2011, along with more than 400,000 other civilians.

Shaken by the killings, a group of journalists including Sennott drew up guidelines for news organizations and freelancers and created a group known as A Culture of Safety Alliance. Thanks to them, when Shane—who’s now on the Mother Jones staff—told us last year that he wanted to find out what America is really doing in Syria, we had a blueprint for the questions we needed to ask. How would we stay in touch in places without internet? If he was arrested, how would we remotely wipe his phone to protect his sources? If he was kidnapped, how would we get him out?

The month that Shane spent in and around Syria was expensive (by MoJo standards)—some $30,000 for insurance, local helpers, satphones, and other forms of risk mitigation. The months of additional reporting, editors’ time shaping the story, in-depth fact-checking, data journalism, and distribution add to a rough total of $400,000. We’ll never make even a fraction of that money back; the best we can hope from advertising is probably in the $2,000 range.

So why did we do it? Because Mother Jones readers want us to dig into crucial stories that others may not. You want us to uncover what it means when American planes flatten a city, why oil fields are turned into bases for troops, and how an Oklahoma-born woman ends up in an ISIS prison under a soccer stadium. And because donations from our readers ­are the backbone of our sustainability, not advertising, we can take risks and protect our journalists.

For most of America’s newsrooms, though, this kind of reporting is no longer in the cards. Back in 2008, when Sennott took a buyout from the Boston Globe to start a site called GlobalPost, foreign coverage was in crisis. Now, he says, “it’s a full-on house on fire for all of journalism. The roof was foreign coverage, and then it burned through the floors and now we’re into the foundation.” Statehouse coverage, city hall reporting—accountability journalism of any kind is going up in smoke.