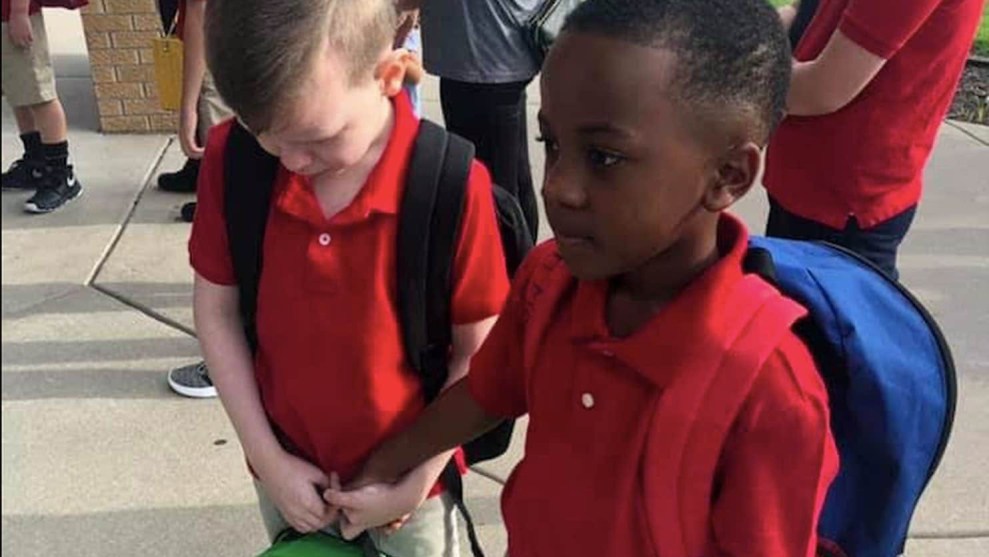 Christian Moore looked at an 8-year-old classmate crying in a corner. It was the start of the school year in Wichita, Kansas.

Christian wanted to help the second grader, Conner Crites, who has autism and occasionally gets overstimulated.

“Instead of overlooking him like most kids would have, [Christian] just reached over, grabbed his hand and made my son’s day better,” Conner’s mom, April Crites, 29, told the Washington Post last week.

A photo of the moment on August 14, taken by Christian’s mom and shared on Facebook, went viral. “It is an honor to raise such a loving, compassionate child!” Courtney Moore wrote in her post. “He’s a kid with a Big heart, the first day of school started off right.”

The students’ nascent friendship has continued through shared lunches and recess play. The two had a long playdate one weekend day, and Conner has asked if Christian can come by for a sleepover. The lesson of Christian’s kindness, Crites said: Everybody has a choice to help or ignore someone in need. “You could,” she said, “say something nice, hand someone a tissue who’s crying and make their day better.”

The wheels on the bus…go round and round more efficiently, thanks to an algorithm. This algorithm allowed the fleet of Boston school buses to eliminate 20,000 pounds of carbon dioxide emissions each day—and invest $5 million in savings back into the classroom. Two doctoral students designed the formula, which has enabled the system to remove 50 buses from the road. In 2017, the buses drove 1 million fewer miles. (Popular Mechanics)

One kick leads to another. One minute, soccer champ Carli Lloyd was just goofing around at an NFL training camp. Then she nailed a 55-yard kick. Now, people are asking: Could Lloyd, the two-time Olympic gold medalist and FIFA Women’s World Cup champion, become the first woman to play in the NFL? Within hours, a Baltimore Ravens assistant coach was on the phone, Lloyd said: “The coaches and his GM, they all saw the video. They were like, ‘What is she doing next week?’ I’m laughing about it, but the more I think about it, this has the chance to be sort of a pioneering moment for women.” (Washington Post)

A flight that made a difference. Speech pathologist Rachel Romeo found herself on an eight-hour international flight sitting next to a 10-year-old boy with severe nonverbal autism. His dad told Romeo it would be a rough flight, and the boy started shouting and hitting her before takeoff. Romeo put aside her academic work and started making drawings for him. “I made symbols for the things he was grabbing, for his favorite stuffed penguin, and for his dad.” The 10-year-old “took to it very quickly,” she wrote. “By the end of the flight, he had made several requests, initiated several times, & his behaviors had reduced quite a bit. The father was astounded—clearly no one had ever tried [such an] approach with him. I gave him the paper & showed him how to use it, and he nearly cried.” Communication, the MIT postdoctoral fellow wrote, is a human right, “and I was overjoyed to help someone find it.” Thanks to colleague Steve Katz for the story tip. (Twitter)

I’ll leave you with this flowing image from Rocky Mountain National Park in Colorado, via the Interior Department’s Twitter feed. Thanks so much for reading, and have a great week ahead!

The forest parts like a curtain by a gentle stream, revealing another beautiful scene at @RockyNPS. Photo by By Dan Mitler (https://t.co/7u0uZGuWtK) #Colorado #FindYourPark pic.twitter.com/OMcWOolEC6