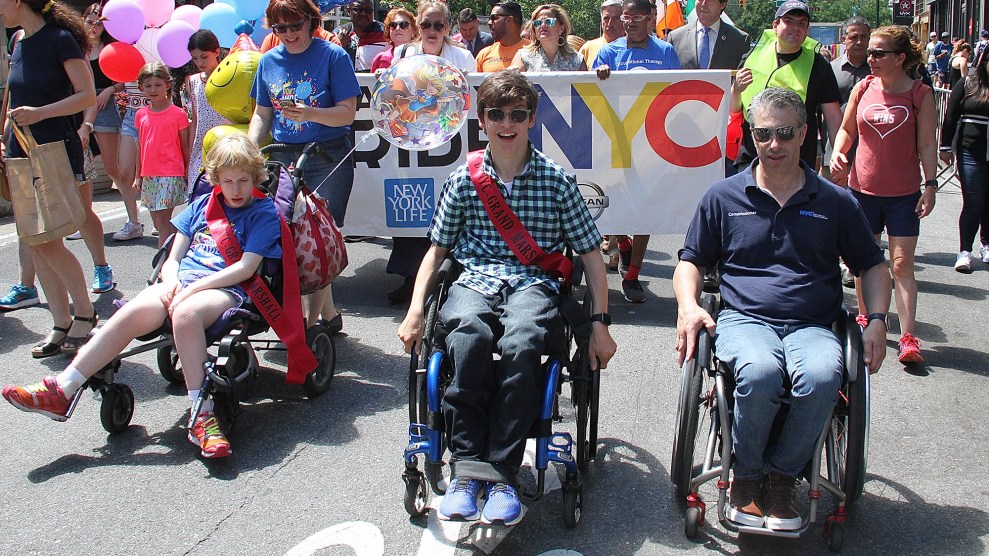 One of the standout essays in About Us, a collection of essays about disabilities, first published in the New York Times, is starkly titled “The Nazis’ First Victims Were the Disabled.” Many of the killing methods used in the Holocaust were first tested on about 300,000 people with disabilities as part of Nazi Germany’s “Aktion T4” project. People with disabilities were depicted as “useless eaters” whose lives were “unworthy of living” in propaganda like the 1941 film Ich Klage An (I Accuse), about a doctor who kills (“redeems”) his wife after she’s diagnosed with a debilitating disease.

“Why is it important to know this history?” asks the essay’s author, the memoirist Kenny Fries, before touching the third rail of historical comparisons: “We often say what happened in Nazi Germany couldn’t happen here. But some of it, like the mistreatment and sterilization of the disabled, did happen here.” Fries cites the 1927 Supreme Court ruling that authorized the compulsory sterilization of so-called “mental defectives” to, in the words of Justice Oliver Wendell Holmes, “prevent those who are manifestly unfit from continuing their kind.” (This decision has never been overturned.) Fries also calls out so-called “ugly laws,” which criminalized anyone appearing in public who was “diseased, maimed, mutilated or in any way deformed,” in the words of one Chicago ordinance that wasn’t repealed until 1974.

There is a long history of dehumanizing language facilitating dehumanizing behavior toward people with disabilities in the United States. But how we talk about disability is changing as people with disabilities assert their rights as the country’s largest minority group: 26 percent of Americans have a disability, according to the Centers for Disease Control. This number encompasses a wide range of conditions often invisible to coworkers and classmates, like severe depression and anxiety. More than one third of this group identify as swing voters, and more than 70 percent said it “really matters” who won the 2016 election, compared with just 59 percent of voters who did not report having a disability.

Plenty of politicians still ignore and disdain people with disabilities, though not always as openly as Donald Trump’s mockery of a New York Times reporter with a congenital joint condition in 2016—which voters said enraged them more than anything else Trump had said or done before then. The bar is slightly higher for Democrats; several candidates have introduced policies to help people with disabilities: Sen. Elizabeth Warren introduced loan-relief legislation for students with severe disabilities. Sens. Bernie Sanders, Kamala Harris, and Cory Booker co-sponsored the Disability Integration Act to force health care companies to offer long-term services to people with disabilities.

If some candidates are paying lip service, is it the right lip service? Three times in a recent Democratic debate, Warren resume-checked her years as “a special needs teacher.” Immediately after the debate, a disability advocate emailed one of my colleagues to criticize Warren for “inadvertently harming the disabled community” by using a term that “is not only outdated, but harmful.”

The term “special needs” took hold in the early 20th century as a switch from “handicapped,” itself a loaded term that originally referred to racehorses. (“Handicap” derives from “hand in cap,” describing people who reached a hand into a cap that held the bets at racetracks.) “Handicapped” had replaced “crippled,” first used in the 1300s, one in a long cycle of disparaging labels like “invalid,” “imbecile,” “impaired,” “spastic,” and “retarded.” There is a history of scorn and violence in these words, though some activists have reclaimed “crippled,” including at Cripple magazine and Crip the Vote, an online movement encouraging the political participation of people with disabilities.

But “special needs,” which didn’t start as a slur, is resoundingly rejected by campaigns like #DontCallMeSpecial. “Special” is the latest euphemism to become a dysphemism, the morphing of what’s meant to be a positive phrase into a derogatory one. “Special needs” fell out of fashion when advocates pointed out there’s nothing “special” about needing health care, education, safety, and access to public accommodations. The Americans With Disabilities Act National Network cautions against using “special” and other “condescending” terms like “handi-capable” and “differently abled.” The National Center on Disability and Journalism says “special” should be avoided because it “euphemistically stigmatizes that which is different.” It recommends the phrase “functional needs,” as in “the functional needs of people with disabilities.” It also advocates people-first language like “people with disabilities” instead of “the disabled” for the same reasons “you would avoid referring to ‘the Asians,’ ‘the Jews’ or ‘the African-Americans’”: “The” has definitional power. It essentializes, reduces, and distances.

“Special” is the latest euphemism to become a dysphemism, the morphing of what’s meant to be a positive phrase into a derogatory one.

Mother Jones’ style guide, which we’ve been updating and are preparing to publish, is informed by NCDJ’s approach. Our stance on writing about disabilities is flexible but calibrated: We defer to sources’ preferences on how they want to be described, but when their wishes aren’t known, we default to the term “people with disabilities.” “People with physical limitations” is also useful—not everyone with a limitation is disabled.

The frustrating truth about labels is that they constantly change, and not always as fast as rights and awareness. When vocabulary doesn’t catch up, people without a trace of malice can be left using yesterday’s words while judged by today’s definitions. If even Elizabeth Warren gets branded as someone “harming” people with disabilities by using words widely accepted not long ago and still in widespread use, it’s progress of a kind: You can measure meaningful strides in public life by the criticism rightly aimed at politicians’ word choice when it falls behind their policies.

People with disabilities do not share a single voice or set of words—which is why the 60-plus essays in About Us don’t share a vocabulary or set of labels, bouncing from “disabled people” to “the disabled” to “people with disabilities” to “special.” The essays enlarge more than they standardize; they broaden more than they box in. The stories “do a double trick: They normalize disability and they exceptionalize it,” Andrew Solomon writes in the forward. The reason “special” gets a pass in the book and not in Warren’s speech is because the book critically examines it; in Warren’s words, it’s rotely recited.

The disability rights movement is growing. But our country has not escaped its deep history of institutional contempt for people with disabilities. Law and language are starting to improve, and attitudes with them. If you’re a person with a disability, where are you on these issues? Is disability an integral part of your identity (being disabled) or a condition (having a disability), or both? What do you want candidates to do, not just say? Weigh in below or reach us at styleguide@motherjones.com.