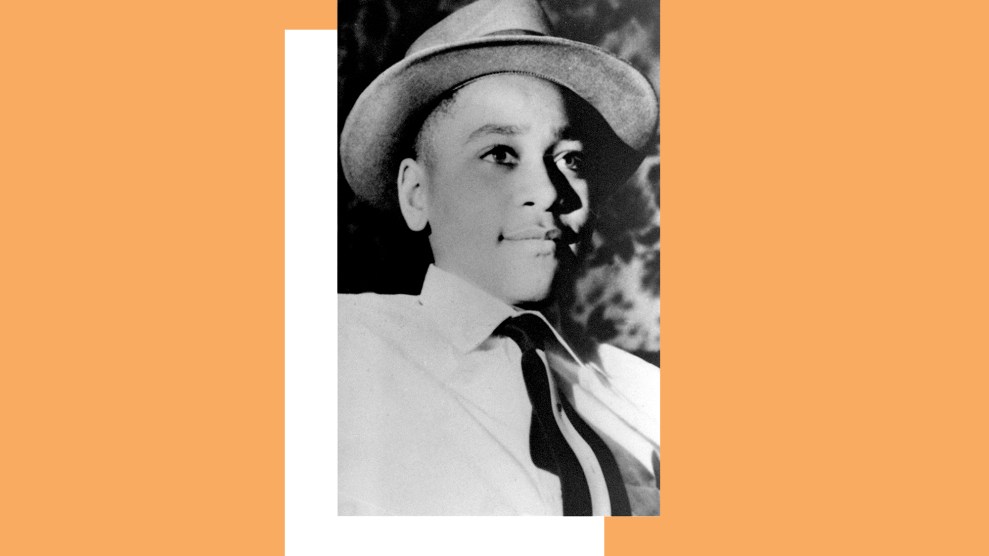 The first historical marker was removed and thrown in the river by vandals. The second and third signs were riddled with bullet holes.

On Saturday, a fourth roadside memorial to Emmett Till was dedicated in Mississippi, honoring the 14-year-old whose torture and murder at the hands of white supremacists in 1955 helped galvanize the civil rights movement. This time, the marker—made of steel—weighs 500 pounds and is covered with bulletproof glass.

A historical preservation group persisted in restoring the marker to ensure that the horrific attack and the significance of the site are publicly recognized, said Patrick Weems, executive director of the Emmett Till Memorial Commission. There will be a fifth or sixth monument if necessary, Weems said.

“We just have to be resilient and know there are folks out there that don’t want to know this history or who want to erase this history,” Weems told the Associated Press. “We are just going to be resilient in continuing to put them back up and be truthful in making sure that Emmett didn’t die in vain.”

Among those attending the dedication were two cousins of Till’s, including one who was with him the night he was kidnapped from his grandfather’s home by a group of white men.

“What they did to Emmett was so ugly that even the Tallahatchie River spewed his body back out so he could be seen and found,” one cousin, Airickca Gordon-Taylor, told the New York Times. “Basically my family is still being confronted with a hate crime against Emmett Till and it’s almost 65 years later.”

Gaming for peace. As a newborn, he was carried by his parents 225 miles from the civil war in Sudan. His two older sisters died. At 12, in a refugee camp, Lual Mayen gained computer skills after his mom sewed clothes for three months to buy his first laptop. Now, at 24, in Washington, DC, Lual is making video games that promote peace and conflict resolution. “If you’re going through something hard and you survive, the next thing is, how do you come out of that?” he said. “How do you utilize that opportunity to make your life better?” (Washington Post)

A judge who did the right thing. A group of Michigan residents opened bank accounts to send money back to Yemen, their war-torn homeland. Because they didn’t register as a money-transfer business, they faced the prospect of years in prison. US District Judge Avern Cohn threw out the sentencing guidelines, spared them prison time, and commended them for trying to help one of the poorest nations on earth. “Only people without compassion” would object, said the 95-year-old judge. “As I’ve been here longer, I’ve come to the realization that the rules are flexible—at least to me.” (Associated Press)

A surprise show of support. A transgender man’s family pulled together to show creative support after Richard Alcântara had top surgery: In a video that went viral, Richard walked into a family event shirtless, with bandages on his chest. The Brazilian’s cisgender male relatives surprised him at the event by also showing up wearing bandages on their chests in solidarity. “A year ago he suffered because he was not accepted by his family,” his girlfriend, Yuri Almeida, posted on Facebook. Things changed, she wrote. “We are who we are,” Yuri said, “no matter our colors, religions, opinions, or tastes.” (LGBTQNation)

Recharge salutes: NASA astronauts Jessica Meir and Christina Koch for completing the first all-women spacewalk outside the International Space Station on Friday; Keanon Lowe, an Oregon high school football coach, who disarmed a suicidal student with a weapon, and then embraced him in a hug; the city of Los Angeles, which just hired its first forestry officer and announced plans to plant 90,000 trees by the end of 2021; and Jimmy and Rosalynn Carter, who last week, at 73-plus years, became the longest-married couple in US presidential history.

I’ll leave you this week with something different, a handwritten note from a KLM flight attendant to a grieving passenger. May we all show such care toward a stranger from time to time. Have a great week ahead.

I recently took an unfortunate trip home & was crying in my seat on a flight from AMS to MSP. A @KLM flight attendant sat next to me, lending some very kind words & advice. At the end, Beijtje Volker (KL 655), gave me this note. It was such a kind gesture. Kudos to KLM. pic.twitter.com/anZxFCIq1o