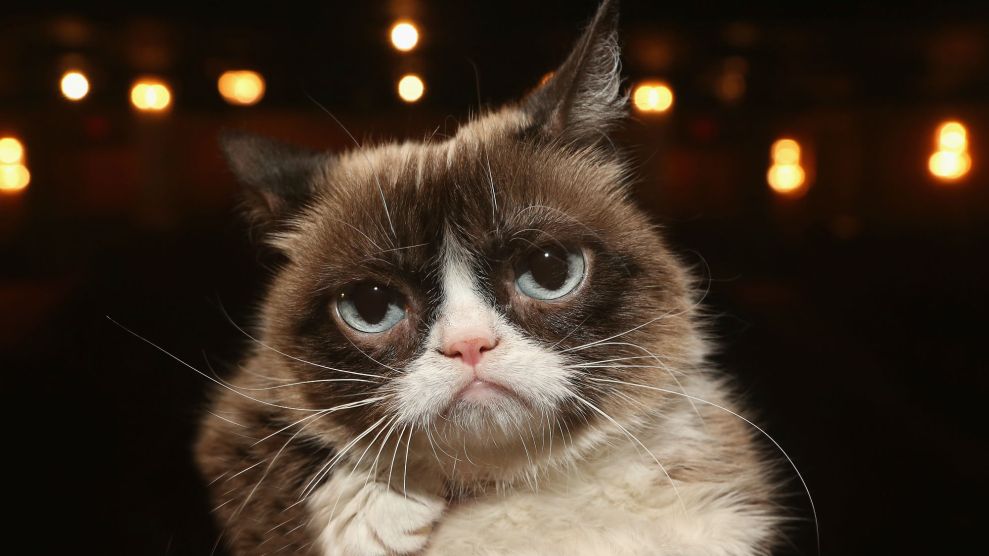 This was the year the internet lost its cat.

Grumpy Cat, whose real name was “Tardar Sauce,” died peacefully at home after contracting a urinary tract infection, her family announced on Instagram in May. The cat curmudgeon captivated millions of internet users with her iconic frown, which was likely due to feline dwarfism.

Tardar Sauce was born on April 4, 2012, in Morristown, Arizona. She was born unto the internet just five months later, when a photo of her pouting face, scowling just off-camera, appeared on Reddit. The photo quickly went viral, gaining tens of thousands of upvotes in 24 hours. Tardar Sauce was a true overnight sensation.

What began as a simple cat photo morphed into a sprawling business that sold an endless array of useless online products. Far from her humble beginnings as a simple Reddit meme, Grumpy Cat became completely commoditized. Although Tardar Sauce left this cruel world in May, Grumpy Cat died much earlier.

According to the meme-cataloging website Know Your Meme, Grumpy Cat’s first T-shirt line was available just over a week after her Reddit debut. Within a year, merchandise bearing her scornful likeness appeared in Hot Topic and Urban Outfitters. Since then, her face has launched a thousand coffee mugs and swimsuits and beverage napkins and “Nope Book” notebooks, among too many other products to name. In 2013, Grumpy Cat signed an endorsement deal with Friskies, lent her trademark scowl to a line of “Grumppuccino” coffee beverages (and later won $710,000 in a lawsuit after the company created a roasted coffee line without permission), published a book, Grumpy Cat: A Grumpy Book with tips on how to be grumpy (“[F]or most it takes a lifetime of practice”), and won a slew of awards, including the Webby’s Meme of the Year “by a landslide.”  In 2015, Grumpy Cat starred in a comic book alongside her brother Pokey. And in 2016, she joined the cast of Broadway musical Cats. Hundreds of products are still for sale on the official Grumpy Cat website.

It’s unclear how much revenue Grumpy Cat has generated, but it’s been estimated that Grumpy Cat Limited, the company under which all of the cat’s business ventures fell, founded in 2013, brought in as much as $100 million in the first few years. Her wild success came with a price—capitalism ruined Grumpy Cat.

In a matter of months, Grumpy Cat went from a pure, perfect fragment of internet pleasure to an out-of-control gimmick. She was, simply put, a sellout. Grumpy Cat died the moment Grumpy Cat Limited was founded. She died when she signed with Friskies. She died when the first shipment of Grumpy Cat attire arrived at Urban Outfitters. She died a million little deaths over her seven-year life, each with the quiet inevitability which seems to have plagued countless internet celebrities before her (see: Fred/Lucas Cruikshank, The Fat Jewish, and Boo, the “world’s cutest dog,” who also passed this year). She died when our parents began to gleefully share nonsensical memes of her on Facebook, to our horror. She became pervasive, cliché, and flat. Grumpy Cat’s ubiquity meant the end of her novelty.

What’s so bad about Grumpy Cat raking in all that money for a family that surely loved her? Nothing, really. But in many ways, the rise and fall of Grumpy Cat in the past decade mirrors the rise and fall of the internet itself. It used to be a place you could go to watch stupid videos and indulge in cat photos. Now, those little bits of internet joy are swiftly repackaged with a $15-$30 price tag. Ten years ago, memes weren’t for sale.

If you look up the definition of “meme” in Merriam-Webster, Grumpy Cat is listed as an example. As it’s defined, a meme is “an amusing or interesting item” that is “spread widely online.” The term was first coined by British scientist Richard Dawkins in his 1976 book, The Selfish Gene, who said that memes are the building blocks of our culture, just as “genes are to life.” In either case, Grumpy Cat no longer fits that definition; Grumpy Cat has become a commodity.

In the end, Grumpy Cat should be remembered at her best. She was a shining star in the immense pit of despair of the internet. She, like any good meme, brought us joy—and that won’t be forgotten. Should you need it, you can always meander over to Grumpy Cat’s Instagram (which still has 2.7 million followers) to try to feel something again—you’ll just have to dodge a ton of ads to do it.