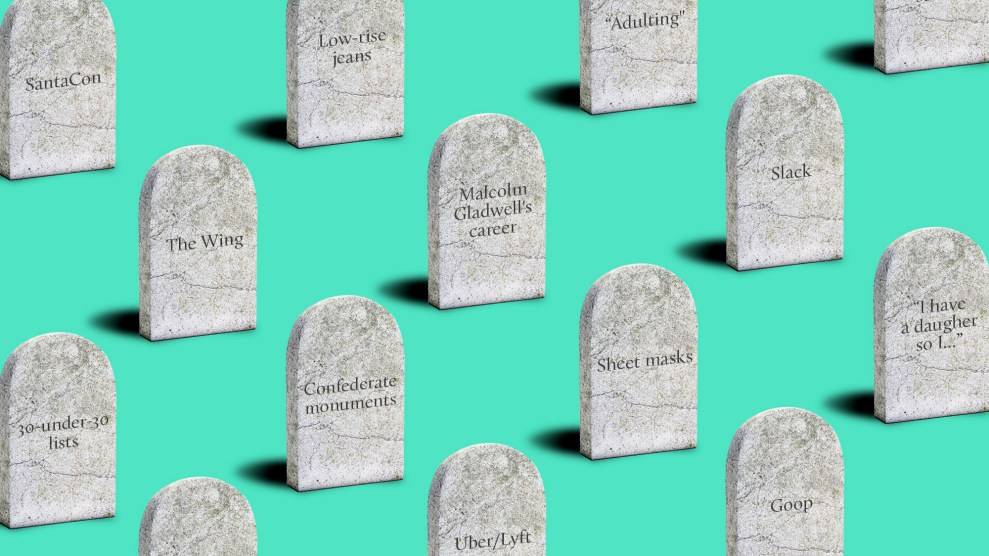 The Wing: A women-only coworking space branded as a feminist wonderland, The Wing calls itself “a diverse community open to all.” How inclusive! Memberships start at $185 per month. —Abigail Weinberg

Malcolm Gladwell’s career: Let’s thinslice: Malcolm Gladwell needs to stop writing. Gladwell’s theories are wrong (stop and frisk) or obvious ( 10,000 hours) or dumb (talking to strangers is the problem with everything). He made his bones at a time when glib, crypto-conservative contrarianism was the reigning media ethos. Today, the shtick has been worn so smooth as to be transparent. Flip through his latest book and you’ll find an easy-pass treatment of the Jerry Sandusky scandal at Penn State and a determinedly apolitical reading of the death of Sandra Bland—two cases of institutional pathologies that Gladwell turns into parables about a quirk in human nature. Powerful people thus get excused for their mistakes, under the guise of Gladwell’s interrogating some orthodoxy or another. You don’t need to be a bestselling author of pop-science airport books to come up with a word for this stuff: bullshit. —Jacob Rosenberg

The careers of all business pop-psychology writers, while we’re at it

Caring about the Conways

Slack: Hating on Slack isn’t an original idea, but let me add my name to the chorus of voices asking office decision-makers everywhere (including where I work) to spare us and get rid of it once and for all. If your office doesn’t use Slack, consider yourself lucky. It’s as if the annoying co-worker who never shuts up suddenly had a direct portal into your computer and you can’t turn it off. Suddenly you’re part of dozens of separate conversations, some of which you need to see, but most of which you don’t. You can try to leave but you’ll inevitably be added back in against your will, and there’s always at least one colleague who abuses the dreaded “@here” to summon everybody at once. It can be performative in the worst ways, including being used by managers to dress down subordinates in front of large groups of coworkers—see, for instance, the Away scandal—and serves as an involuntary venue for mediocre takes and tweet workshopping. It’s an information security nightmare, full of loose conversation and casual shit-talking that would be awkward (at best) when reviewed in a deposition or in some hacker’s Pastebin dump, and you have to trust your workplace admins to not look through it (the name is an acronym for Searchable Log of All Communication and Knowledge, after all). Let’s go back to email. —AJ Vicens

Sheet masks and all single-use plastic beauty products: Microbeads have been banned but single-use beauty products have only become trendier. That organic sheet mask is wrapped in plastic and enclosed in yet more plastic. Your virtuous self-care routine inevitably ends up in a landfill or the ocean, where it will remain forever. —Rebecca Leber

30-under-30 lists: This might have something to do with my recently turning 30, but I can tell you from experience: 30 is no different from 29 or 31. Why do we treat youth as its own virtue? I wish I could unlearn the word “Wunderkind.” —Rebecca Leber

“I have a daughter, so I…”: Perhaps the best thing to happen over the past decade was the #MeToo movement, but of course, as with any step forward, there came bad allies and clout chasers. After the first wave of women who stood up and said, “Me, too,” there came a tide of men who said, “I have a daughter, so I… .” Fellas, maybe try thinking of women as whole human beings on their own merit, rather than in relation to yourselves. Your mothers and daughters and nieces and coworkers deserve more, dammit. —Becca Andrews

Confederate monuments and the insipid debate about “heritage”: I am Southern. I am the sort of Southerner who is constantly reminding everyone around me that I am, in fact, from the South. Biscuits, whiskey, grits, any state legislature below the Mason-Dixon line, I will have opinions, y’all. It’s obnoxious, but part of the reason I hold on so dearly to the good stuff is because there is so much truly horrible shit that comes with the territory. For example, many of “my people” (read: other white people in the South) are still debating the merits of keeping Confederate monuments intact and proudly displayed in statehouses, on college campuses, in town squares, or wherever one might stick the bust of a long-dead white supremacist for all to see.

I have a vivid memory of being in middle school and complaining about a school policy that banned us from wearing the Confederate flag, nodding my head in vigorous agreement with another (white) kid who was saying that it was harmless and its once-racist meaning had long ago dried up and disintegrated. As an adult, I’m horrified by that memory. I am even more horrified that symbols of the darkest days in the history of my home remain intact, serving as a reminder to people of color that not only were they once denied the recognition of their basic humanity, but that to this day there are those who would happily deny them that again. —Becca Andrews

Reply-all: I am lousy with messages. Text messages, voicemails (jesus christ), Slack messages, email, Facebook messages, Twitter DMs, Instagram DMs, snail mail, smoke signals, owls, telegrams, the Pony Express, it never, ever ends. So please, I am begging you, do not, for the love of all that is still good in this world, press send to express your approval to an entire team of people when only one of them really needs to know. We don’t all need to know unless someone is bleeding. Unless someone has died. Unless an evacuation is necessary. Unless the good media ship we’re on is sinking. Insulate your fellow human from this one evil if you can; it’s the least you could do. —Becca Andrews

The idea of a monolithic “left”

“Adulting”: This is a word that never needed to be a word. Grow up already and just handle your shit. —Becca Andrews

Gratuitous semiannual “I love women” threads in which men praise women in media: Chris Cillizza once unhelpfully tweeted “Women > Men. Everyone knows this.” Most men are only slightly more subtle, tweeting performative threads of women they admire on occasion, only to ignore the same women’s work and gravitate toward elevating and praising men’s work the rest of the year. —Rebecca Leber

Saying “regardless of your politics”

The inability to remain logged into news sites on apps

SantaCon: I love watching people drink in costume, but SantaCon somehow manages to take all of the fun out of it. Once a year, it brings to the surface all the unreconstructed Phi Delts lurking in our cities to terrorize every decent person trying to get to work or casually day drink in peace. Apparently, Mother Jones inadvertently started the holiday, and for that, we should never be forgiven. Swear to god, one year I saw two elves physically fight over a Santa at a family-friendly BBQ restaurant. SantaCon: No one likes you. Go home, you’re drunk. —Marisa Endicott

Starting sentences with the word “So.”

Political books by Trump enablers: The revolving door used to refer to former government officials who landed lucrative jobs in the private sector as lobbyists, lawyers, paid board members, bank executives, or other private-sector positions out of reach for most normal people. The Trump revolving door is that, of course, but that door also spins directly to a publisher’s office and a book deal. There’s Anonymous, of course, but this person may still be in the administration. Just consider the unread pages from only a few of Trump’s talentless now-published enablers: former Defense Secretary Jim Mattis’ Call Sign Chaos; communications maven Omarosa Maginault Newman’s Unhinged; world record holder for brevity in public service Anthony Scaramucci’s Trump, the Blue Collar President; creepy operative Corey Lewandowski’s Trump’s Enemies: How the Deep State is Undermining the Presidency; and many more. Lest we forget, there’s one book we wish were by a former administration official: The America We Deserve, by Donald Trump. Its Amazon rank? 154,255. —Marianne Szegedy-Maszak

Reboots in general (unless they’re reboots of things I like)

The movement to free Adnan Syed

Low-rise jeans: As 2020 and the threat of Donald Trump’s reelection loom, another menace lurks closely behind: low-rise jeans. The sordid fashion trend, which technically belonged to the 2000s, is said to be making a stunning comeback; Two years ago, The Cut predicted they’ll be the ruling fashion by 2020. But why the inexorable march to something no one wants? Reject and resist. —Inae Oh

People who live-tweet their journey to the airport: Get a life! —Inae Oh

The use of the word “monoculture” in a non-agricultural sense, particularly in media properties founded by Bill Simmons

Saying “I fall in love with the person not their genitals”

The fixation on Kanye’s political views