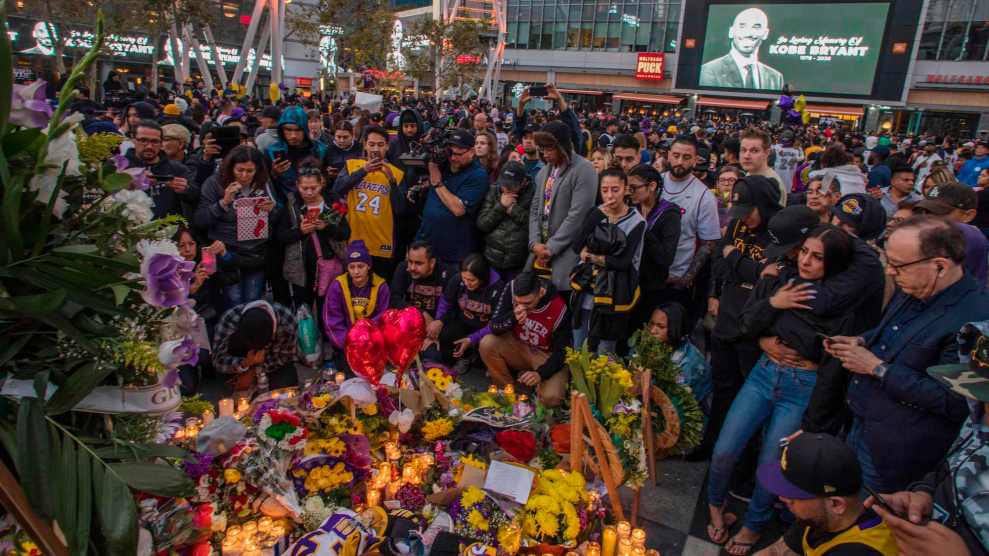 Fans gather at a memorial for Kobe Bryant in Los Angeles.Apu Gomes/Getty

A horrifying helicopter crash that killed retired NBA star Kobe Bryant, his 13-year-old daughter, Gianna, and seven other people on Sunday generated a global outpouring of grief, tributes, and memorials. But for many observers and fans, Bryant’s death has raised conflicting feelings about how to properly grieve and remember someone who was both a beloved celebrity and a powerful man accused of rape.

It’s a familiar problem, especially if you were (or still are) a fan of Michael Jackson, Woody Allen, Roman Polanski, or Bill Cosby: Should the worst actions of our cultural heroes change how we remember them? Should these men still be celebrated, canceled, or simply (and simplistically) characterized as “complicated”?  “What do we do with the art of monstrous men?” Claire Dederer asked in an eloquent essay published in the early days of the #MeToo movement. “We can’t watch or listen to or read the great work without remembering the awful thing. Flooded with knowledge of the maker’s monstrousness, we turn away, overcome by disgust. Or…we don’t. We continue watching, separating or trying to separate the artist from the art.”

Basketball was Bryant’s art, as thousands of words in articles and TV segments and social media posts have detailed in the last two days. The Washington Post described him as a “tireless competitor” and “global sports icon.” Bryant “helped restore the Lakers to glory,” the New York Times wrote; he was “a mammoth figure from almost the moment he arrived” in the NBA, who built an “unmatched legacy.” The Los Angeles Times, his hometown paper, eulogized him as “one of the greatest in the history of the game.”

However, there are other facts that exist alongside the fact of Bryant’s incomparable stature on the court. In July 2003, Bryant allegedly raped a 19-year-old employee of a resort in Colorado where he was staying. Prosecutors charged him with sexual assault and false imprisonment. As a 2016 Daily Beast article about the case reported, the evidence against Bryant included a rape kit exam that documented injuries “not consistent with consensual sex,” the woman’s blood on Bryant’s shirt, a bruise on her neck, and corroborating testimony from a bellman at the hotel. In a press conference, Bryant insisted the sex was consensual and unforced, characterizing the incident as “adultery.”

The woman’s name and transcripts of closed legal hearings were leaked and the national media aired details about her sexual and mental health history, which Bryant’s lawyers used to paint her as unstable, promiscuous, and hungry for fame. Shortly before trial was scheduled to begin in September 2004, she backed out, and prosecutors dropped the charges. Bryant issued a remarkable apology that all but acknowledged that the incident had crossed a legal boundary: “Although I truly believe this encounter between us was consensual, I recognize now that she did not and does not view this incident the same way I did.… I now understand how she feels that she did not consent to this encounter.”

Obituaries for Bryant in major newspapers and news outlets do not erase the allegation of sexual assault, but they mention this episode with varying degrees of detail. The Washington Post sets up the incident by noting that Bryant’s “reputation as a teammate and sports role model were matters of controversy.” It describes a clash between Bryant and Shaquille O’Neal before making a perfunctory reference to the allegation in its fourteenth paragraph, emphasizing its impact on Bryant’s reputation:

Mr Bryant’s image already had changed a year earlier, when a female employee of a Colorado resort accused him of sexually assaulting her. Although charges were eventually dropped, a civil settlement was reached and Mr. Bryant’s image as a clean-cut cultural darling was tarnished.

This terseness may reflect an institutional preference. On Monday, the Washington Post suspended reporter Felicia Sonmez for posting a series of tweets that included a link to the Daily Beast article and statements arguing that the rape allegation was part of Bryant’s legacy. Sonmez, who said she received death and rape threats in response to her posts, deleted the tweets after being instructed to do so by managing editor Tracy Grant, who said the posts “displayed poor judgment.”

The Washington Post‘s treatment of the allegation was echoed by CNN, which swiftly lays out the timeline of the “controversy” before returning to Bryant’s athletic achievements. While the New York Times also introduces the sexual assault allegation in the context of Bryant’s image, writing that the case “would change how many people saw Bryant,” though he would remain “hugely popular.” Its obituary, titled “Kobe Bryant’s Brilliant and Complicated Legacy,” dedicates a more detailed paragraph to recapping the legal developments.

The Los Angeles Times engages with the case against Bryant more deeply. “His aggression and agility on the court came with a darker side as well,” Thomas Curwen and David Wharton write in the opening of their 5,000-plus word obit, before summarizing the allegation and how the case was resolved. Later, they describe how Bryant’s relationship with his wife, Vanessa, was “part fairy tale and part extended family drama” until the rape allegations exploded their domestic life.

None of these four obituaries mention the more graphic evidence of the case or the incident’s impact on Bryant’s accuser. The Los Angeles Times’ comes closest, hinting at her victim-blaming and slut-shaming in its reference to “a media whirlwind fed by themes of sex, celebrity and race.” It notes that the case was “marked by serious blunders” and that Bryant’s attorney had “talked about a history of ‘black men being falsely accused of this crime by white women.'” Yet it also sums up the episode as a matter of bad optics for Bryant: “By [2004], some sponsors had severed their deals with Bryant, his reputation tarnished.” (Nike returned to using pictures of Bryant in 2005.)

The obits largely characterize the rape allegation in terms of how it affected Bryant’s public image, ultimately portraying it as a minor part of his story. This reflects the media’s rehabilitation and celebration of Bryant over the past 15 years, in which he was allowed to return to grace around the same time he started winning championships again. That public narrative was, in turn, enforced by the non-disclosure agreement Bryant’s accuser signed when he settled her civil suit.

The pressure to remain silent does not just weigh on survivors, particularly following a tragedy such as this. Yet as Somnez wrote on Sunday in a since-deleted tweet, “Any public figure is worth remembering in their totality. Even if that figure is beloved and that totality upsetting.”