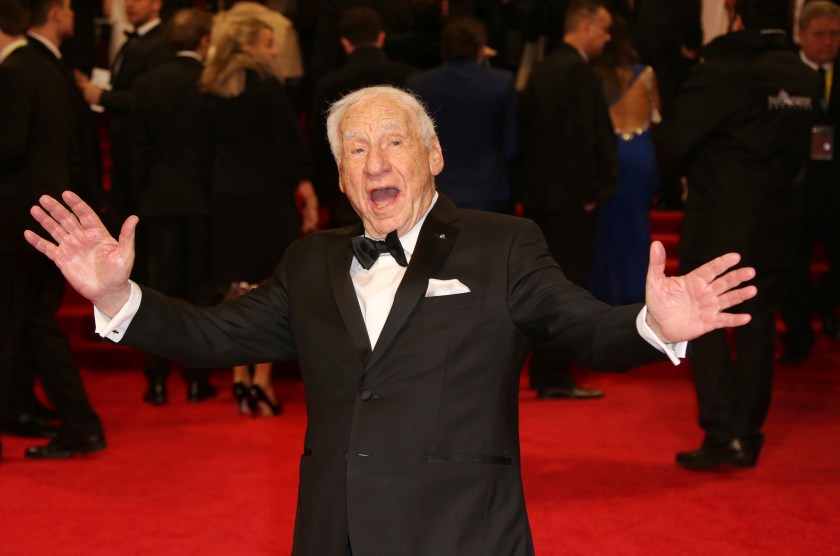 In Mel Brooks: Unwrapped, a new documentary streaming on HBO, Brooks drums on his desk, shops at Whole Foods for pasta, and drives around Los Angeles during sunset. Often unprovoked, he bursts into song. He sits, he chats, he watches TV. He does what many people do. Except he’s Mel Brooks and he’s 93 years old and I want to watch every single second of it.

Just point the camera at Brooks so we can save as much of this natural resource as possible.

Brooks will always be known for writing, directing, and starring in his indelible movies—Blazing Saddles, The Producers, Spaceballs, and Young Frankenstein, to name a few. He was a writer for the legendary early TV show Your Show of Shows, which made Sid Caesar, Carl Reiner, and Imogene Coca into household names. But his brilliance shines most when Brooks is simply being Brooks: riffing on talk shows, speaking with journalists, chronically unable to stop joking and performing and exaggerating and being hilarious.

To learn about the history of Brooks in this documentary, or any other medium, really, is an uphill battle, because the man ruins it with jokes.

Watch him destroy on Johnny Carson or on Dick Cavett. And, yes, you’ll think: Any late-night host would kill to have Mel Brooks appear. Then try to find a clip where he isn’t funny. Promoting his 1977 film High Anxiety, he goes on Danish TV: Unconcerned with the language barrier or foreign press weirdos, Brooks hits punchline after punchline. The interviewer asks him about all his jobs directing, acting, and producing. “Well, if you hire other people,” he confides, “you’d have to pay them money.”

Brooks refuses to compartmentalize comedy into standup, movies, sketch, improv. He has a motor. He is funny—always. Like a firehose, you either turn it on or off. Alan Yentob, a longtime fixture of the BBC as a director, executive, and presenter, has been talking with Brooks for decades. He famously made two other projects about Brooks, in 1981 and 2012. Unwrapped puts this previous footage alongside more recent interviews. The product of his work is the impressionistic, scattered, wildly funny, and casual Unwrapped. It is an unhurried movie. But this is no hypermeditative slow cinema about the tedium and drama of everydayness. It’s just a camera fixed on Brooks. “Is that a good documentary?” you may ask. No! Not if you expect a conventional documentary that carefully pieces together where Brooks came from, his family, his pathos, his parents, his wives into an intimate portrait. To learn about the history of Brooks in this documentary, or any other medium, is an uphill battle because the man ruins it with jokes.

Yentob hands Brooks a childhood photo of himself. Brooks looks at it and gives him a different photo that he says is a “little better.” It is a baby picture of Robert Redford.

Yentob asks Brooks about his original name, Melvin Kaminsky. Instead of answering, he yells, “Melvin Kaminsky? Are you crazy?! NOBODY KNOWS MELVIN KAMINSKY!”

“Was there something special about being Jewish in Brooklyn at that time?” Yentob asks later. “No,” Brooks replies, “everybody was.”

People just aren’t this good at being fun to be around! Especially not comedians offstage. (Check out a “comedy” podcast.)

We overdosed on a certain kind of narcissistic truth. Brooks instead sought truth through artifice.

For years, we have toiled in the world of “important” comedy. While some did well with the medium (early Mike Birbiglia albums, Hannah Gadsby’s Nanette, Donald Glover’s Atlanta), it became hard to imagine a great comedy that wouldn’t be praised in half-insult: It isn’t even comedy! And those were the goods ones. There were at least three different shows on major networks about a comedian becoming a comedian. Comedians became raw, real, honest, vulnerable—searching for their inner self—and boring. We overdosed on a certain kind of narcissistic truth. Brooks instead sought truth through artifice.

“All my films are serious. They are passionate and they depict human behavior,” he tells Yentob. “They are not dramatic, that’s the difference…You’ve got to say something about the system. About the social structure. About prejudice. About people. About behavior. Comedy is not successful unless it deals with—” Brooks grabs at the air in front of him. It’s not about him, it’s about all the ephemera in the world. When Unwrapped was released, he told USA Today, “I rarely relax and actually become myself, and in this one, I do on several occasions. I’m happy that I was able to not just be funny all the time.”

And after you have watched the show there’s more! @HBO has put two of my previous comedy specials back on @hbogo and @hbonow – “Mel Brooks And Dick Cavett Together Again” and “Mel Brooks Live At The Geffen”

But I feel like I’ve gotten to know him through the years even as he’s been using his humor as camouflage.

Brooks appears on Conan O’Brien’s show after the death of fellow comic legend Sid Caesar in 2014. Brooks’ first real break was writing for Caesar’s Your Show of Shows in the early 1950s. He appears on Conan, grieving but still funny. O’Brien and Brooks chat about Caesar’s great work like two old friends meeting at a wake. O’Brien shares an amazing old black-and-white clip from a routine that Brooks wrote for Caesar’s show. I won’t spoil it here. Just watch:

It is a brilliant two minutes of comedy and human insight, made all the better because, as Brooks says to O’Brien, there’s a “brushstroke of pathos” at the end. O’Brien mentions it’s one of his favorite endings to a sketch. “I stole it from…The Last Laugh,” Brooks admits. “You have to know where to steal things from.” He gets another laugh.

It seems natural. The canned, sometimes overdramatized routines comedians use to share their “story” often say more about what a comic wants you to think of them than who they actually are. Brooks’ inability to be serious accidentally reveals him. The same intimacy and vulnerability peeks out in one of the last moments in Unwrapped.

The film flashes to a sketch recorded decades ago. It is a graveyard; a TV adorns Brooks’ tombstone. In this world, Brooks died and prerecorded a message to those who visit his grave. He used to be Kaminsky, he explains, “but I’d like you to think of me as Mel Brooks, because that’s where the big bucks came in.”

Sure, death is looming for all of us, he acknowledges. And then he makes a pivot. “Actually, I’ll tell you what lives on: videotape. It’s the only substance that is immortal,” Brooks says from his fake grave. “Long live videotape.”