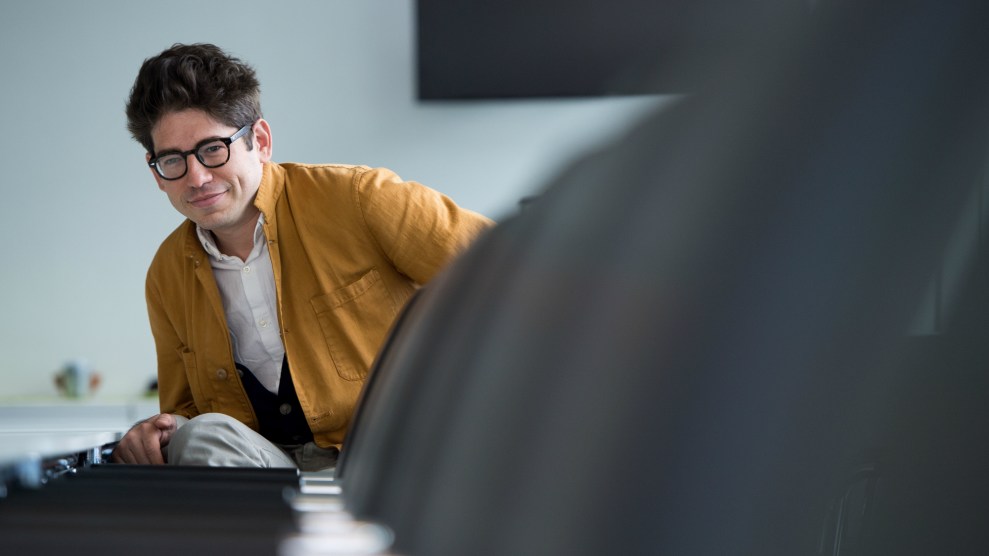 Yancey Strickler, the co-founder and former CEO of Kickstarter, has been in a bit of a bind. His book, This Could Be Our Future, is a “manifesto” for “a more generous world.” It is an argument for—and even a partial guide to—a new, conscious capitalism. But he can’t avoid the other major development in techno-capitalism: unions.

On Tuesday, workers at Kickstarter, which Strickler helmed from 2014 to 2017, voted 47 to 36 to form a union. Kickstarter United, certified by the National Labor Relations Board, will be the first union made up of full-time, white-collar tech workers. It comes amid a wave of organizing at places like Google and Amazon—and of pushback. Kickstarter has actively opposed the movement, calling a union “inherently adversarial.” Workers even say they were fired for organizing, as reported by April Glaser at NBC News and Slate; a claim which the company denies.

Strickler has largely stayed out of the fight. When I spoke with him in early December, a few months after his book published, he admitted to giving me a boilerplate response: “As an outsider, I just want a resolution,” he said. (I reached back out after Tuesday’s vote and a representative said Strickler was traveling.)

He preferred instead to discuss his argument for how companies should be motivated by more than just profit (a theory he calls Bentoism); and why he turned Kickstarter into a public benefits corporation, a type of governance structure that gives companies legal protection from shareholders for focusing on social good in tandem with profit. Kickstarter has always branded itself as different: headquartered in New York, uninterested in going public, focused on artistic projects as opposed to GoFundMe’s dystopian healthcare charity. Strickler wants to change the hidden default of a hockey stick growth curve to define success.

In their opposition to the union though, Kickstarter sounded a lot like Strickler. “Our perspective on this issue is born out of our work to build a new model for how a company can operate responsibly in society,” Aziz Hasan wrote in a statement in 2019 about why the company will respect but does not want a union. “The PBC model is the best one we know of for breaking out of the profit-maximization mindset.” That line could have come straight out of This Could Be Our Future. (“Expanding the value spectrum beyond financial maximization isn’t a pipe dream. We’re already doing it,” writes Strickler introducing a section on why companies should become PBCs. “I speak from experience.”)

The drive to organize at Kickstarter, while concerned with traditional issues like pay and workplace diversity, sprung out of an internal dispute about a fundraiser for the book Always Punch Nazis, according to Slate. A debate over the politics of the book spilled into a debate over, well, punching Nazis. Workers decided they should have more say in the kind of projects the company gives a platform to. “Once you set your values, those things keep getting tested,” Strickler told me. “That seems like what’s been happening this year.”

There’s a hopeful way of viewing this. Strickler argues that it’s just as notable that Kickstarter hired the kind of people who want to organize as the fact that conditions led to organizing. Once you talk about values, people want to live them. “I don’t think a union and PBC, [have] to be in conflict with each other,” he said. “Whether the ultimate answer is like [a PBC] plus a union—you know, we’ll see, we’ll see. My era of the company was getting us to the PBC part.”

At times, this is what’s distressing about This Could Be Our Future. Strickler’s manifesto can feel like a vision for the future written from the past. Unions and organizing are the talk of the town now—a company’s benevolence feels like an old fashioned idea. It used to be possible to hear a former CEO of a tech company like Strickler pondering “where should we be in 2050” with optimism and without worry. Right after the recession, maybe we even needed to believe it. In 2008, we wanted “change we can believe in” politically; in 2009, we did not question what it meant for Mark Zuckerberg to call for “openness“; in 2011, Steve Jobs died and a random tweet is included near the top of the obit: “You touched an ugly world of technology and made it beautiful.” Technology, then, could save us. We could pivot. We could rebrand. Move from the greediness of Wall Street to the goodness of the Valley. Let’s make economics here. And under this veil, we can redeem it. We can save capitalism.

What if a “simple idea”—the title of Chapter 1 of Strickler’s book—could unlock this new place? What if companies (tech companies!) can help us get there? What if a company valued something other than “financial maximization”? What if a company had values? Throw in a new term for the aristocracy (“the Maximizing Class”) and a new religion-like business strategy to reach enlightenment (“Bentoism”)—Strickler’s ideas have their specifics and their complexities, but it all sounds so familiar, doesn’t it? The tech CEO with an idea. What if business wasn’t so bad after all? What if companies could be “partners leading the way” to a values-based economy?

“This sounds like a hard sell,” Strickler admits in the book This Could Be Our Future. But, then, he can’t help himself: What if?

My question to Strickler was, “How?” How do you actually make a company do things we know companies don’t do? His book assumes he can convince the rich. As the Wall Street Journal said in a review, Strickler does not take aim at the financial maximizers, “he seems to want to change their minds.” During these sections, it can be thrilling. Strickler is utterly convincing in how bad the modern world has become. He helpfully points out that actual entrepreneurship has dropped since the 1970s, a lot— “analogous to the drop in smoking rates over the same time span.” He notes that the growth of a Milton Friedman-infected capitalism has subbed in profits for actual economic health. It became about total growth. “The goal wasn’t to build a better future, raise the standard of living, or serve the needs of the public,” he writes. “It was to financially maximize right now. Our new hidden default.” He calls this the mullet economy, a fun name.

Strickler isn’t quite sure how to convince the rich, but he thinks putting forward a rational model beyond profit could win them over. But the solution feels lacking, if the people who do the good work are excluded from its benefits. Kickstarter United proposed another way: “Our union hard-codes our shared values into everything that we do: inclusion and solidarity, transparency and accountability; a seat at the table.”