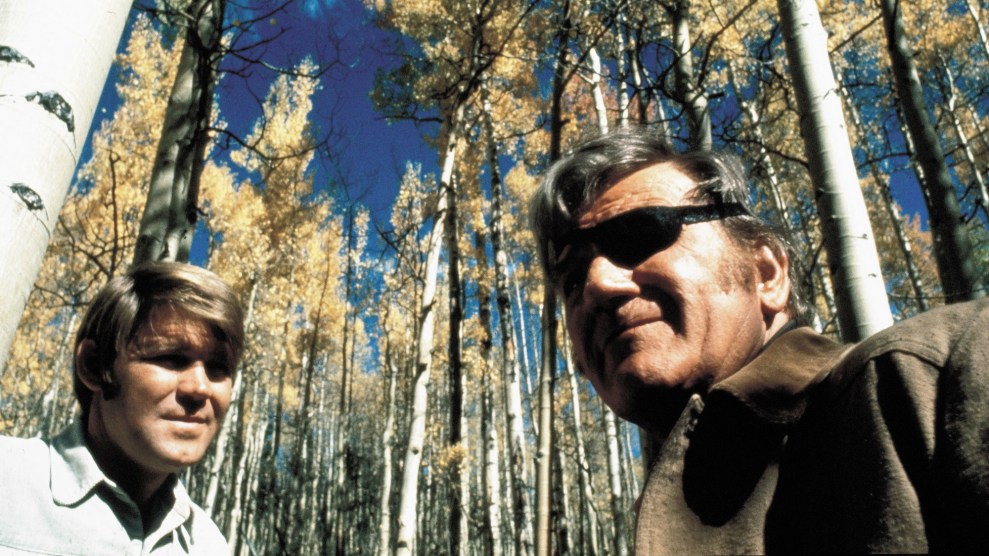 John Wayne and Glen Campbell on the set of True Grit.Entertainment Pictures/ZUMA

I made my first experiments in Southern identity at the age of 13, when my father gave me a copy of Barry Hannah’s Geronimo Rex. It was something I did not know I needed. I was tired of the bullying, mostly self-inflicted, that I was too much of a loser, nerd, geek, phony, lameass (plus all the slurs not worth printing). I wanted to claim something for myself. I chose Southern; I chose Rex. I said to an imaginary foe, “No, I’m like y’all, too.”

Of course, no one cared. Only a true idiot would think that a novel from 1972 could help him fit into late-2000s high school life. Hi, I am that idiot. But the process continued for years. I found a Southern writer or Southern musician and connected. I used their work to build up a sense of myself as part of something larger, a tradition. When I was living in Little Rock, I found Charles Portis.

He died this week, at 86. His New York Times obituary was written by the legendary Roy Reed before Reed died in 2017 and it’s a wonderful peek into Portis’ work. He was a giant of an author to many, especially to those I respected, and especially to Arkansans. I spent an incredibly small amount of time in the state, working for a little over a year at an alt-weekly and a magazine. But even during that short stint, I felt his presence. His name was said with a certain tone. I read to catch up. Offhand Portis lines were somehow local maxims. “When the beer came,” he wrote in one novel, “I dipped a finger in it and wet down each corner of the paper napkin to anchor it, so it would not come up with the mug each time and make me appear ridiculous.” I heard people say this; I saw someone do this. Roy Blount Jr. has noted the difficulty in explaining how the line became a classic. Just try it next time you go to a bar. Just read Portis.

I can’t claim him at all. (Same goes for Hannah.) But I did interact with those who loved Portis, who could rattle off his every sentence, it seemed, and I did read a lot of Portis when I was in Little Rock—and it felt freeing. Portis wrote like someone who understood his world. He was casual, funny, rambling. You badly wanted to be his friend (or at least I did). Most of his novels follow someone just ambling and seeing strange shit. Some of his best magazine pieces are travel writing. You don’t have to make sense to be in a Portis world. Nothing makes complete sense. But unlike a Pynchon character, you’re real; this is not a dream. You’re driving down the highway, that’s all. He told shaggy-dog stories in which weirdness was just a normal part of life.

“Yes, I’m doing right well,” Grady Fring the Kredit King, a sleazoid huckster, tells the titular character in Portis’ picaresque novel Norwood. The two are drinking “a bottle of Old Forester from under the seat” in Fring’s “big new Buick Invicta with red leather upholstery,” combining the whiskey with “crushed ice in a milk shake carton.” This sort of offbeat stuff happens all the time in real life. You end up in a someone’s car, drinking, and he wants you to admire the ephemera of his life, and what you remember afterward is some strange, fugitive detail—the ice was crushed, the upholstery was red leather. I think about my friend’s grandmother, driving around my hometown with a child’s sippy cup of white wine in her hand. She’d picked up the habit when she had young kids, to hide the constant intake, and then never stopped.

Portis was at home in the offbeat. That was important for me. I’ve never made sense, at least not to myself, and I wanted an identity when my father gave me Hannah. I’d lived inside of a video game for a few years by then, to cope. But then I grew too old for that, or maybe bored with it. And I was searching again.

Everyone was calling me Jewish—just my Dad’s side of the family, who by the 2000s had dropped any semblance of their Judaism beyond Seinfeld reruns and brisket; I’m actually, unfortunately, very Catholic. So what could I be? This is a dangerous question for a young white man in the South. I tried on different guises. In middle school, our history books leaned toward a version of the Civil War draping the South in honor. I became the left-leaning kid who wanted to learn the evolution section of our seventh-grade biology course despite the teacher recommending we skip it. (The next day I printed out 20-plus copies of Charles Darwin’s Wikipedia page, putting one on each desk.) At the same time, I told my friends I wanted the nickname “Stonewall.” As in, Jacob “Stonewall” Rosenberg; as in Stonewall Jackson, Confederate general—because he was shot, and it was, surely, valiant.  A little Lost Cause child whom the Cause would’ve rejected. (Jackson was shot by friendly fire, by the way.)

That seems idiotic now. But for many Southern white kids, learning about racism is a bit like learning about sex—someone on a bus or on the playground explains to you in a whisper all the things your parents didn’t want you to know, and then suddenly it’s everywhere, and it’s all you think about.

So, OK, my Southernness would have to be built out of other materials. I had an itch to find stuff that looked and sounded like the world around me: strip malls, highways, grimy and weird shit. You can talk about the South as a land of honor, or you can talk about the South as shitkicker country, but all of that felt foreign. To me, it was more casual—it was just weird, is all. But normal, too. Hannah was my first entrance. I read Geronimo Rex in high school a few times, probably the only book I read, and I can remember a specific phrase from the front page: “It looked like an old chalkboard eraser floating in a pool of beer.” Yeah, exactly: that South. I can’t quote Hannah sentences like his apostles. But I loved him. Then came the others: Walker Percy, Randall Kenan, Carson McCullers, Larry Brown, Willie Morris, Flannery O’Connor.

Portis was the one who unlocked it all, though. He was funny in the same way as my favorite comedians; he was a journalist, too, with Tom Wolfe (a favorite) and Nora Ephron (my idol) at the New York Herald Tribune. I wrote comedy; I was a reporter. He went off to write the great novel, and he did it. True Grit is unlike anything else in American literature. It’s his best work. But, of course, my favorite is The Dog of the South.

“Idleness and solitude led to these dramatics: an ordinary turd indulging himself as the chief of sinners,” explains the narrator as he breaks down over his broken-down car. (I yearn for the Bill Hader movie adaptation of that scene and fear it, too.)

I’ve felt like a fraud my whole life, and I don’t plan to stop now. I feel like one right this moment, actually, as I tell you what others can say better, which is that Charles Portis is the best writer you haven’t read. But laughing at your own grandiosity, twisting yourself up in a ridiculous search for meaning, undercutting your pretensions at seriousness with a joke—that seems like Portis.