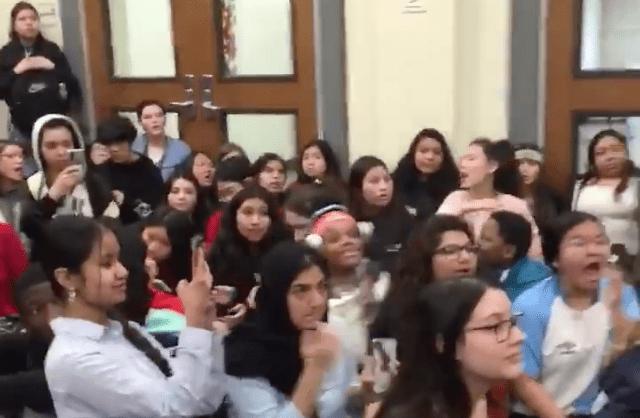 “Go back to your country,” a Chicago high school teacher allegedly told a 17-year-old Mexican American student, who was born in the United States, after the student and her classmate refused to stand for the national anthem. The students said they were exercising their rights—and expressing their beliefs in free speech.

The second student, 18, said the teacher told her she had no respect for those who’d given their lives for this country (and inquired if she was getting free lunches).

After word spread last Wednesday, students at the school, which is predominantly Latino and Black, held a sit-in (captured on video) and demanded the teacher be fired. The next day, the school said he was removed from the classroom and told to remain home with pay until an investigation was completed. The alleged comments were “unacceptable language that violated the district’s anti-discrimination policy,” a school spokesperson said.

The 17-year-old student said she felt the teacher had racially profiled her, and said the teacher’s personal politics got in the way of his job. The other student said the teacher approached the students while “we were silently exercising our rights, our beliefs, and our opinion.” The school principal said a group of students had raised previous questions about the same teacher’s behavior, which will be investigated as well. The teachers union had no comment on the case.

Enlightening a community. For 9-year-old Anmol, the teasing began in kindergarten. “Tomato head,” they called him. Coming home from school, he asked his mom, Sukhvir Kaur, “Do I look American?” The target of the teasing, Anmol said, was the turban, or patka, the head covering that members of the Sikh faith wear. It symbolizes equality by democratizing a style of headwear traditionally worn only by India’s elites. Anmol didn’t get a chance to tell that story while he was teased at school in Visalia, California, but he did get to share it for a PBS public service announcement, which is being broadcast throughout the region. The exposure has bolstered Anmol. “It’s great,” his mother said, “to see my shy, quiet kid become more confident.” A reader response from @JoannSarcinella: “Anmol you do look American. American to me…are many beautiful shades, ethnicity, cultures, languages, religions, foods, all in this amazing pot of soup. We are all diff but the same. We are one people and together we make America one of a kind. I hope you see this.” (Fresno Bee)

The possibility of joy. It took 50 straight days of running for Kayla Williams to begin to feel better, and to realize that what she’d felt for years was more than blue. The former Army sergeant was working a high-stress job, raising kids, and dedicating herself to her husband, who’d sustained a traumatic brain injury in Iraq and needed treatment for symptoms of PTSD. Finally, Williams realized she needed help, too. “In my 40s,” Williams writes, “at last I am open to the possibility of living a life of joy.” (The War Horse)

Gratitude: She stopped at the police station and dropped off baked goods—and this note: “I went to detox the next day and haven’t used since,” she wrote. “Due to you guys saving my life through CPR, and Narcan, I got my life back.” That meant holding down a steady job and regaining custody of her daughter, said the woman, who police did not identify. A lieutenant for the Natick, Massachusetts, Police Department, Cara Rossi, said the gesture touched the officers deeply. (MetroWest Daily News)

Recharge salutes: Taxi driver Rajbir Singh, who intervened to stop a 92-year-old California woman from being scammed out of $25,000; the state of Florida, which has removed guns from the hands of hundreds of high-risk people under a law passed after the Parkland school massacre; and members of North Dakota’s Native American population, who won a settlement after years of fighting that would allow many to vote. The state had passed a voter ID bill that required a form of identification many Native Americans did not have.

I’ll leave you with this quote from columnist and author Connie Schultz: “Gentle courage is the strongest, because it is one’s essential nature, needing no reason to prove itself.” And here’s a majestic sunset from Big Bend National Park in Texas, via the Interior Department’s Twitter feed.