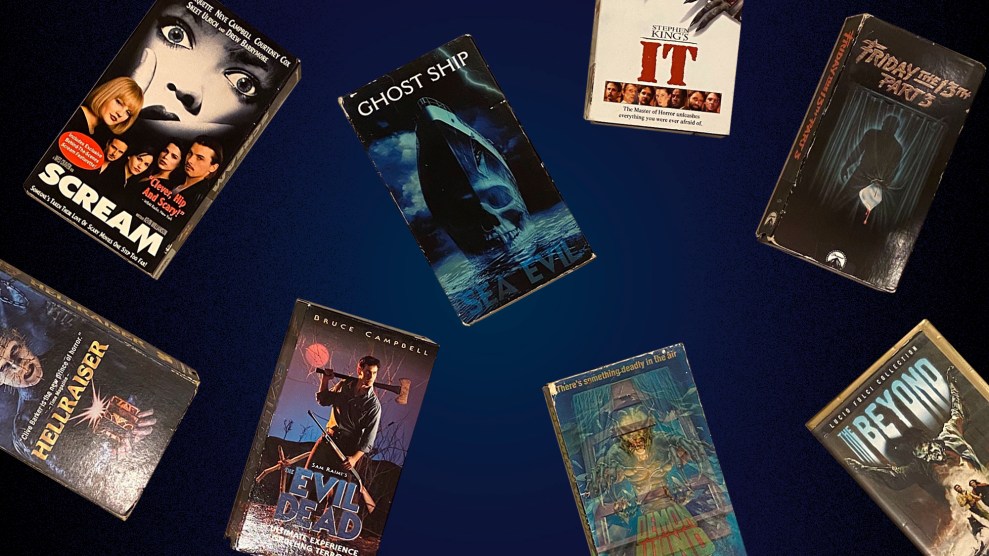 On March 13—a Friday—President Trump declared a national emergency for the novel coronavirus, and I decided to hunker down for a movie night. This was in keeping with tradition: I always watch a film in the Friday the 13th franchise every Friday the 13th. I had recently unearthed an old VCR player from my grandma’s house and bought some horror VHS tapes from a local record store for the occasion. But this Friday the 13th was a little different from the others. Real terror was afoot.

I had friends with me that night. This was back when social distancing guidelines allowed for gatherings of 10 or less. For 90-some minutes the anxieties of impending doom via deadly virus were washed away with the blood of the dumb, horny teens. We screamed at every jump scare, laughed too hard at the canned dialogue, gasped at the horrendous line reads. I made my friends take a sip of their beverages every time Jason Voorhees killed someone or every time two characters fucked. And we watched all of it through the glorious graininess of a severely worn videotape. It felt fantastic—exactly the kind of dumb fear I needed in a moment spiraling into crippling “what-ifs.”

Here’s the thing, though: Now I can’t stop buying old movies on VHS.

I’ve been buying random lots of old horror tapes all over the internet. On Etsy, I got a bundle of random tapes for $20 (Hellraiser, Scream, The Evil Dead, and the original It, among them). On eBay, I’m currently in an intense bidding war for a severely used copy of an obscure ’80s Canadian sci-fi/horror film called The Brain. (Yes, I know the movie is available to rent on Amazon Prime for $2.) There’s even a site for VHS collectors—VHSCollector.com—where people regularly post rare and valuable tapes for sale. I check it daily.

This isn’t totally surprising—I’m a big horror buff and have a fondness for obsolete media. But I did not expect my hobbies to blossom so strangely in a pandemic. Jason literally punching the head off someone during a fight in Friday the 13th Part VIII: Jason Takes Manhattan is my self-care. Whatever the fuck is happening in this character introduction scene from the under-appreciated 1990 cult gem Demon Wind is my balm.

There is just something steadying about watching scary movies from a bygone era, on technology from a bygone time. We know how it ends, and it’s all fine, relatively speaking. The final girl takes down the monster once and for all, or at least until the sequel, and VHS gives way to DVD and eventually to streaming. Life is full of monsters and suboptimal technology, and then we beat the monsters (occasionally) and invent better stuff (sometimes), and eventually we get to look back in gleeful drunken condescension at the things that used to make us jump. For a couple hours I get to comfortably sustain the illusion that things have an arc. Then I press eject and return to the real horror.