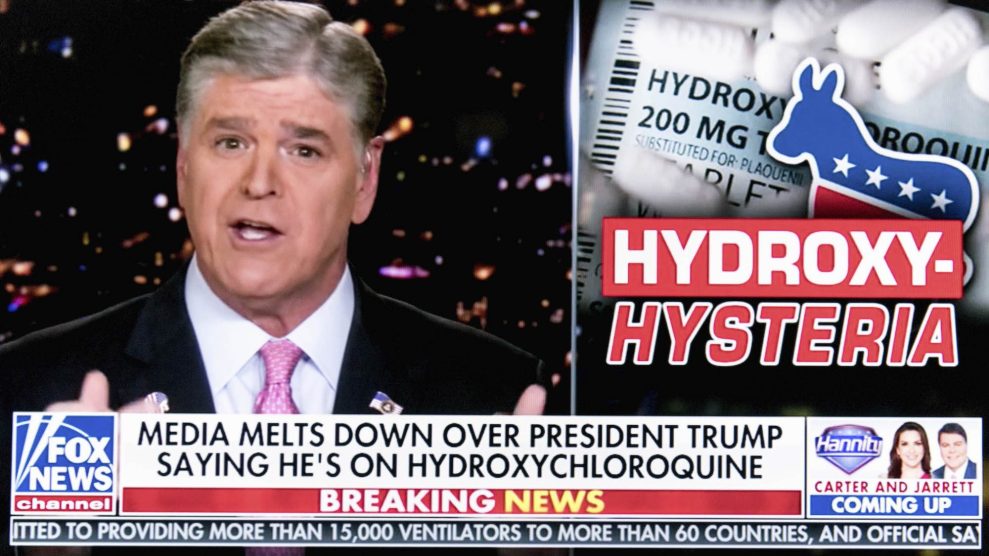 As President Trump has made increasingly outlandish claims about COVID-19—like the efficacy of the drug hydroxychloroquine or the wonders of ingesting disinfectant—Fox News has duly followed up with earnest coverage trying to legitimize his statements or downplaying the dangers of the disease entirely. Despite the network spreading misinformation during the epidemic, most of its advertisers have stuck around.

Among the most loyal and generous of them has been the insurance industry. According to a new report from the liberal media watchdog organization Media Matters for America, which was released on Wednesday, nearly 50 insurance agencies purchased more than 3,000 advertisements across Fox News’ programming in March and April, just as the pandemic rapidly escalated. Just five agencies, Allstate, Liberty Mutual, Progressive, USAA, and GEICO, purchased more than 1,700 advertisements; with the exception of GEICO, they all hold spots on the network’s list of top 10 advertisers. The report notes that these are the same companies that have also poured advertising dollars into supporting the network’s efforts to deny the seriousness of climate change.

“Fox News has served as a hub for misinformation and other tactics intended to distract from and dismiss the urgency of the climate crisis,” Allison Fisher, director of the climate and energy program at Media Matters, noted in the press release accompanying the report. “Now the network is using those same reckless tactics to misinform and downplay the severity of the coronavirus pandemic.”

The misinformation the network broadcasts strongly correlates with the outlook of its viewers. According to six polls conducted by Gallop and the Pew Research Center throughout the month of March, the majority of Fox viewers thought the epidemic was overblown, and 57 percent of conservative news watchers thought COVID-19 was no more dangerous than the flu. These viewers appear to underestimate the severity of the epidemic and even though one can’t blame Fox entirely for this, the network’s message reinforces this attitude. Some scientists have urged insurance companies to withhold their advertising as a way to pressure the network to broadcast more responsibly.

“Dangerous science denial is part of the Murdoch and Fox News playbook. I’ve watched them spread climate change denial for years. Insurance companies—which claim to be committed to science-based decision making and risk management—should have pulled their advertising money a long time ago,” Professor Michael Mann, director of the Earth System Science Center at Penn State University, said in the press release. “I urge Liberty Mutual and others to cut all ties immediately, given that Fox is actively spreading misinformation during a pandemic that is killing tens of thousands of people.”

The dissent by both the network and its viewers from scientific consensus, and insurance companies’ willingness to enable it in the form of advertising dollars, is nothing new. Fox News has long espoused skepticism towards the reality of climate change, despite scientific consensus about its peril. A report from the World Health Organization in 2018 projected 5 million climate change deaths between 2030 and 2050. In four months, COVID-19 has killed 350,000 people worldwide, of those 100,000 are in the US, and has paralyzed world economies. The disease has brought with it an even greater sense of urgency for messaging based on science.

Nonetheless, according to the report, throughout March and April, when the disease spread was most severe, insurance agencies made up 10 percent of all advertisements that ran on Fox and Liberty Mutual alone ran more than 600 ads on the network. That is in stark contrast to other companies that stopped running advertisements after controversial messaging from the network. In 2018, insurance company Pacific Life joined 30 other companies in cutting ties with Fox News after Tucker Carlson told viewers that immigration made the country “dirtier.”

To better understand why a brand would buy commercial time in such a contentious space, I spoke with Tope Berkovitz, a professor of political advertising at Boston University. “More and more in the modern age, [advertisers work to] show a connection between the brand, the advertiser, and the target audience,” he says. Fox News has created a community organized around the world view it promotes. If the insurance companies suddenly pull their advertising, their commitment to those values could be seen as a sham. “If you violate that,” Berkovitz says, “The consumer will spank you badly, and so if the consumer feels that he or she is being cheated, taken advantage of, lied to—if this is what they perceive, they will take it out on the advertiser.”