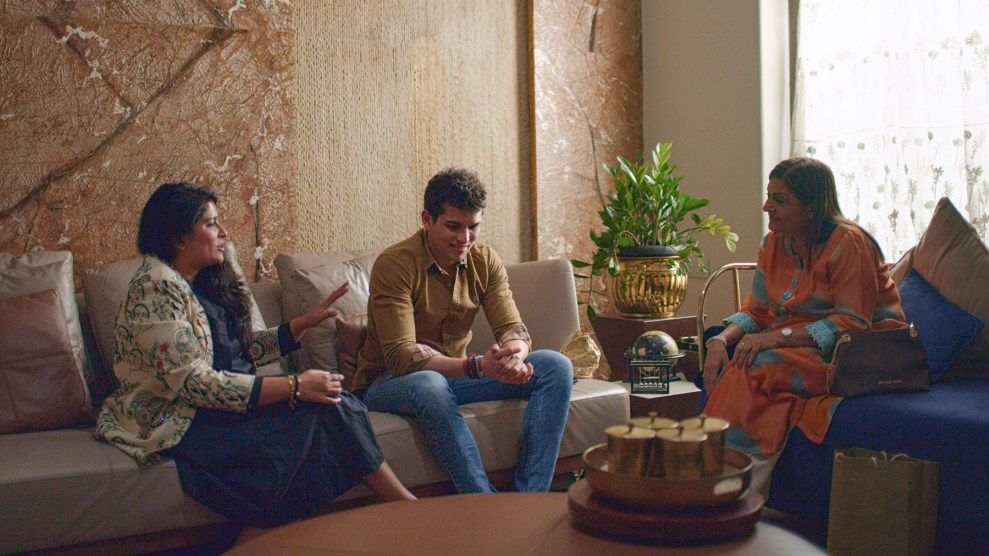 I learned about Netflix’s new show Indian Matchmaking during a phone call with my dad. He said he’d read a Twitter thread from an Indian woman who talked about her traumatic experiences navigating arranged marriages. Reading it reminded him of a period in my life, my mid-20s, when we were searching for a groom for me.

I am a South Indian who grew up in Mumbai. For many Indian women, including me, mid-20s is the time when parents have the “talk”—except this talk isn’t about sex or puberty (sexual education is glossed over in Indian schools and families). It’s about a plan to settle down with a “suitable” groom. It’s that time when a woman realizes that she’s a liability to her parents even if she is financially independent. A father can’t rest till he hands off his daughter to another family.

My dad ended the call by saying he wouldn’t share the Twitter thread with me lest it trigger painful memories. But of course, I had to track it down.

I’ve been seeing a lot of jokes about the show on matchmaking and arranged marriages on Netflix and as someone who’s lived through this hell for most of her twenties, I’m here to tell you; it’s no joking matter 1/n

Since its release on July 16, Indian Matchmaking is all my Twitter stream can talk about. This binge-able show follows Sima Taparia, who calls herself Bombay’s top matchmaker, as she finds partners for her mostly elite Indian clients. In the first episode, Taparia lays out the sociological context of the show for a Western audience: Arranged marriages are the norm in Indian society. A marriage is a union between two families, not just the bride and groom. Families are heavily involved in the process.

What she doesn’t lay out to the audience directly, but casually references again and again, are the prejudices latticing Indian society that define the arranged-marriage process. As Taparia travels around India and the United States to meet her Indian clients, she carries with her a binder—full of profiles of grooms and brides—that she calls “biodatas.” The biodatas reveal information about a prospective match’s height (super important); photograph (the lighter the complexion, the better); caste (non-negotiable-stfu-it’s-really-important); horoscope (so the stars are aligned); and other details like interests (“travel”; “food trucks”; “music festivals” seem popular) and professional degrees (lawyers and doctors abound).

Did I mention that most of these really important details are variables that the prospective grooms and brides don’t have any control over? I quickly lost count of the number of times Taparia mentions the words “fair” or “slim” or “family background” (a euphemism for caste and class) while referring to a potential match. Heck, the first episode is even titled “Slim, Trim, and Educated.” The show fails to rise above any other reality dating show because the participants aren’t given space to interrogate these prejudices, but rather they quietly accept them as prerequisites for an arranged marriage.

Taparia is constantly advising women that they need to “compromise” to find a good match.

Even as matchmakers and families rarely bend on the caste, color, or status of prospective matches, they expect young women to let go of the few things that matter to them. I’ve heard this complaint time and time again from female friends who are educated and financially independent. Two ambitious women on the show—Aparna Shewakramani and Ankita Bansal—are told that they’re “rebellious,” “strong-headed,” “stubborn,” and even “greedy” for standing their ground on the qualities they were looking for in a partner. My heart broke as I watched a supposedly progressive matchmaker warn Bansal, an entrepreneur with her own clothing line, that she should be ready to give up her career and relocate if her husband demanded it. In the arranged marriage process, strong independent women are expected to relinquish so much that their identities are reduced to nothing.

Taparia is constantly advising women that they need to “compromise” to find a good match. In the first five minutes of the show, a groom’s mother tells Taparia that she wants a daughter-in-law who is “flexible” because that would make her job easy. I cringed when I heard that. Flexibility. Compromise. Adjustment. These three words, the bedrocks of patriarchal society, were repeatedly peddled through the show.

The words reminded me of arguments I had with my family as they sought a match for me. We didn’t hire a fancy matchmaker. My dad did the work of poring through profiles online. He was my matchmaker and a gatekeeper. My family wanted someone who belonged to my caste, subcaste, subclan, and region, whose horoscopes matched with mine. I’d joke that after matching for all these traits, there would only be a total of like four men out of a country of billion in the eligibility pool. The probability of me finding someone suitable seemed minuscule.

I would routinely fail to hit it off with men my dad wanted me to marry, since most of them came from conservative families and expected me to conform to ironclad traditions that I found oppressive. One boy expected me to dress up in traditional nine-yard sarees and follow strict religious protocols, many of which were sexist, but he also consumed alcohol, which was a complete no-no in our culture. I don’t have a problem with my partner consuming alcohol, but the hypocrisy of expecting his future wife to adhere to strict norms while he was flouting the rules was jarring. Like Taparia frequently does on Indian Matchmaking, my family would complain that I had very high standards. I was too stubborn; I should be willing to compromise.

A relative couldn’t fathom why I’d say no to a boy who owned a car and a house.

Once, a relative couldn’t fathom why I’d say no to a boy who owned a car and a house. What more could you ask for in a partner? We were stuck in a deadlock with no end in sight.

Finally standing up for myself—though it led to some ugly fights—was worth it. My parents thought that a similar family background was a better marker of compatibility than bonding over personal values, worldviews, and experiences. I disagreed. Would they be happy if they got what they wanted, but I was unhappy because I wasn’t convinced that it was a good fit?

My dad was perplexed when he learned we weren’t on the same page. But after three years of unsatisfactory dates and a lot of uncomfortable conversations with my parents, I told my dad I was ready to make a deal with him. Not a compromise, but a deal, where we’d work together to find my partner.

I handed over a list to help him filter profiles using words such as “open-minded,” “feminist,” “curious,” and “liberal.” No matter how long it was going to take, I told him, I needed my partner to embody those qualities. From then on, while he didn’t budge on the caste requirements, my father seemed more mindful of what I wanted. Ultimately, he wanted me to be happy. And that’s the difference between a professional matchmaker and a parent. My parents couldn’t just dust their hands off and move on to their next matchmaking project. They were invested in my long-term happiness.

My dad’s matches started getting better. Eventually, I met someone I clicked with, and after dating for a year, we got married. In retrospect, I find it funny that I had to boil down an ocean of intuition into a box of keywords to get through to my dad. But it worked. For my family, matchmaking turned out to be an exercise in communication and collaboration, and ultimately it brought us closer. At some point between resolving conflicts, my parents confronted some assumptions they’d been harboring for a long time. My dad even calls himself a feminist now.

But Indian Matchmaking doesn’t spend much time exploring the negotiations families make while navigating age-old traditions. And it doesn’t question the power imbalance inherent in the matchmaking process, which favors parents’ wishes first and foremost. I was lucky to find someone I liked in my arranged marriage, and I know several friends and relatives who’ve had successful marriages after being matched. But I have also heard of horror stories: men or women who lied about their sexual orientation before entering a marriage, or people who were forced to give up on the people they loved for the sake of an arrangement.

During the phone call a few weeks ago, my dad brought up my 3-year-old daughter. He said he hopes his granddaughter doesn’t have to endure what I did. My daughter may or may not end up having an arranged marriage, but whatever she chooses, my husband and I want her quest for finding love and partnership to be driven by her vision, and not ours.