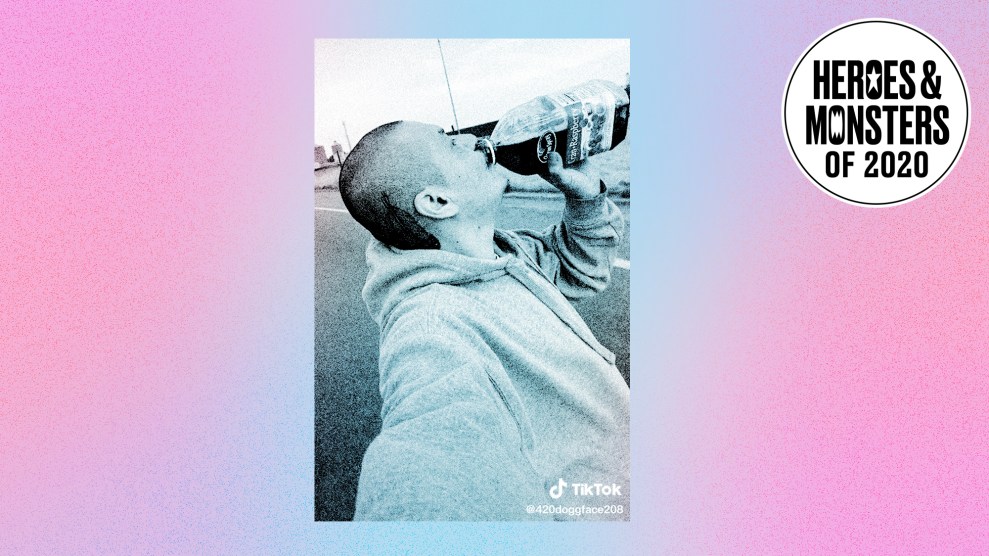 Like many of you, I was inside a home I’d spent far too much time in when I first saw Nathan Apodaca rolling into the pantheon of good vibes. Being too old in spirit, but apparently not in age, for TikTok, I assumed he was an outsider who’d hit on something genius, not DoggFace, the Idaho man who’d been dancing and lip syncing for years.

A year before, the Latinx culture site ReMezcla had dubbed Apodaca, whose mom is Northern Arapaho and whose dad is of Mexican descent, Tío TikTok for his renditions of old hits on a platform dominated by teens. He’d been on Instagram since 2016, where he started out posting photos of his daughters playing with his dog or practicing viola. When they weren’t around, the posts—a photo of edibles for a 2 Chainz concert in Denver, for example, using the hashtag #420Souljahz—skewed stoner dad.

After his daughters introduced him to TikTok, he found his niche with videos that used the potato warehouse he’d worked in for nearly two decades as a stage. His general philosophy comes through in a post of him putting together cardboard bulk bins to System of a Down with the caption “work sucks sometimes but o well SMILE.” He hit 1 million views with a post that was just him dancing to Doja Cat.

Apodaca was only skating down the road in September because he kept a longboard in the back of his Dodge Durango. It had more than 330,000 miles on it, and he knew to expect mechanical difficulties. So when the battery went out on his way to work, he started skating, the New York Times explained.

Since he posted the video of his improvised commute, his life has entered the realm of fantasy. Ocean Spray and an Idaho car dealership gave him a cranberry-red pickup with a juice-filled bed. He moved from an RV without running water to a five-bedroom, two-story house. The experience of having one floor for sleeping and another for living has been a revelation. As he told People, “We have a whole house underneath us.” On a trip to Las Vegas, he proposed to his girlfriend, Estela Chavez, whom he met at the potato warehouse, by trying to sing Adam Sandler’s “I Wanna Grow Old With You” in her native Spanish. (She said yes.) During a visit to a Beverly Hills cosmetic dentist, he got veneers.

The subtext is that Apodaca wound up with running water, space for his daughters to visit him, and a truck he can count on because he managed to maintain immaculate vibes without those things, not because he was doing a job we’ve been at pains to praise as essential. And since this is 2020, the latest news is that Apodaca and Chavez have tested positive for COVID-19. He’s still dancing. Now to “I Will Survive.”