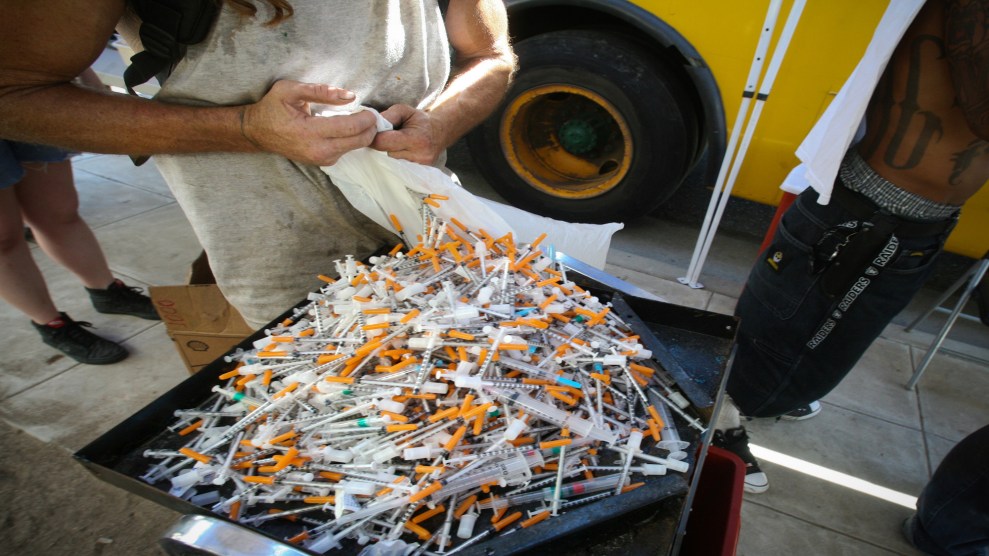 A client of California's Fresno Needle Exchange turns in hundreds of used hypodermics for disposal.John Walker, The Fresno Bee

The war on drugs may profess to be waged against narcotics, but it overwhelmingly targets people—a view increasingly shared by experts on drug use. Nora Volkow, director of the National Institute on Drug Abuse, touched on this recently when she wrote about addiction stigma in STAT, noting that “societal norms surrounding drug use and addiction continue to be informed by myths and misconceptions.”

Starting in the 1980s, a rowdy group of individuals began advocating for a different approach to drug policy called harm reduction. These activists, researchers, social workers, attorneys, and others, from a myriad of different backgrounds, have focused on the harms of drug use—not the drugs alone.

Maia Szalavitz’s new book Undoing Drugs: The Untold Story of Harm Reduction and the Future of Addiction is an in-depth history of a powerful idea, exploring many angles of drug policy, including prescription drug use, supervised consumption, and legalizing cannabis. Throughout, she also details the racial inequities and social justice tensions that have defined the drug war.

Szalavitz, a science journalist, unwraps the many layers of harm reduction, a philosophy that has also been adopted in approaching sex work, restorative justice, COVID-19, and other areas. When it comes to illicit substances, harm reduction runs the gamut from sterile syringe access programs to supervised drug injection rooms to distributing the opioid-overdose antidote naloxone.

Depending on whom you ask, harm reduction has many different definitions, including “radical empathy” which requires “meeting people where they’re at.” Szalavitz offers multiple interpretations, but writes that, simply: “Harm reduction applies the core of the Hippocratic oath—first, do no harm—to addiction treatment and drug policy. This takes the focus off of psychoactive drug use itself.”

Tracing the roots of the movement, Szalavitz introduces us to characters like the “Goddess of Harm Reduction” and the “Johnny Appleseed of Needles,” whose lives are dedicated to spreading evidence-based practices of harm reduction. Some advocates were arrested, ostracized by friends and family, or lost their lives to overdose.

For years, the US government rejected harm reduction services, even going so far as to ban federal funding for needle exchange programs. But now there are jobs, conferences, and nonprofit organizations committed to harm reduction. And in President Joe Biden’s budget for the 2022 fiscal year, $30 million has been earmarked for services like syringe access, the first time Congress has appropriated funds specifically for harm reduction, according to the New York Times.

Szalavitz follows the evolution of the movement, beginning with her own story in New York in the 1980s. Addicted to opioids during the height of the US HIV/AIDS epidemic, the young writer had no clue that sharing syringes could spread the deadly new virus that was already killing so many. Yet between 55 and 60 percent of people who use intravenous drugs at the time were positive with the virus.

Ideally, of course, people who inject drugs should never share syringes. Doing so can spread bloodborne pathogens like HIV and hepatitis C. But ideal situations don’t always exist in the world of street narcotics. So some public health agencies, such as the Centers for Disease Control and Prevention, began recommending a middle ground: If you must reuse a syringe, properly disinfect it using bleach and clean water, which by some estimations can greatly reduce the chances of contracting HIV (though certain sources say otherwise).

Before that knowledge became more widely known, a friend’s girlfriend taught Szalavitz this trick to lower her risk of infection, setting her life on a completely different course. She credits this fortuitous acquaintance with saving her life.

“I needed to know how to keep others from suffering the fate I’d only narrowly avoided.”

Szalavitz became enraged that no one had given her this simple advice. Why had she not encountered a public health campaign blasting this information to all who needed to hear it? But back then, Szalavitz says, few in government seemed to care about people who use drugs. “It didn’t seem fair or right to see anyone as being that worthless,” Szalavitz writes. “I needed to know,” she adds, “how to keep others from suffering the fate I’d only narrowly avoided.”

Thus began a three-decade reporting career on harm reduction, drug policy, and crucially, science, that has spanned, as she likes to put it, “from High Times to the New York Times (and includes Undark and Mother Jones). In this book, she interviewed hundreds of people to catalog the first- and secondhand accounts of people who have helped bring harm reduction into the public consciousness.

The book takes us from Vancouver, Canada and San Francisco, California, to Liverpool, England. Throughout are gossipy details about regular people: their broken relationships and personal dramas, their allegiances and falling outs. This isn’t the book’s main focus, but is a reminder that every movement involves a decent share of infighting and argument, tiny tests that demonstrate the resiliency of an idea.

To make harm reduction work, its progenitors needed to rely on strong research. In 1987 several drug activists in Liverpool started the Mersey Drugs Journal, where they documented local efforts and helped put the term “harm reduction” on the map. Because their ideas reached beyond the borders of Merseyside County, the publication was renamed the International Journal of Drug Policy. Currently issued by Dutch publishing monolith Elsevier, the peer-reviewed journal has an impact factor of 5.0 (meaning it is often cited by other researchers) and is indexed in 11 international databases.

“If studies show that a policy doesn’t reduce harm, it can’t be part of harm reduction. And how can you oppose a policy that works?”

By “emphasizing conducting research on its efforts, harm reduction created an enormous intellectual obstacle for its opponents,” Szalavitz writes. “After all, if studies show that a policy doesn’t reduce harm, it can’t be part of harm reduction. And how can you oppose a policy that works?”

Szalavitz has often been witness to harm reduction history, including an important 1991 court case that paved the way for legalizing syringe access in New York. It began in March of that year with the arrest of eight demonstrators from the AIDS Coalition to Unleash Power, commonly known as ACT UP, a grassroots political group that fought to end the HIV/AIDS crisis through civil disobedience. They were about to hand out sterile syringes on a Lower East Side intersection when the police swarmed the crowd and handcuffed the activists, charging them with needle possession.

Reporting for local outlets, Szalavitz witnessed the arrests and much of the trial, with opposing sides offering evidence for and against syringe access. Testifying for the defense was the city’s former health commissioner, Stephen Joseph, who had notably clashed with ACT UP on numerous occasions. But this time he agreed with them, describing their actions as “courageous,” and drew a parallel to 19th-century British physician John Snow, who traced a cholera outbreak to a single London water pump, similar to how ACT UP activists traced HIV to unsterile injection needles and sought to eliminate the source of infection.

The defense also presented evidence that syringe access programs reduce the transmission of infectious disease and encourage people who use drugs to enter treatment. One witness “noted that the US was nearly alone in the developed world in rejecting needle exchange,” and pointed to supportive data from the Netherlands, the United Kingdom and Australia. As Szalavitz writes, there was “no scientific evidence that needle exchange caused harm—all of the existing data showed the opposite.”

Last year was by far the most deadly period in American history for drug overdoses, with more than 92,000 dead.

Without refuting evidence, the prosecution lost their case and the door opened for needle exchange programs to be legalized in New York. Decades later, the data is even stronger for syringe access, a practice that has been championed by the CDC, the American Medical Association, and the World Health Organization.

Yet the fight for harm reduction is far from over. In mid-July, the Atlantic City Council voted to shut down New Jersey’s largest needle exchange program, ignoring the objections of the city’s health director and many other healthcare professionals. A similar scenario played out this year in Scott County, Indiana, which was the epicenter of a devastating HIV outbreak in 2015. Experts say a syringe program helped put a lid on the outbreak. Yet in June, Scott County commissioners voted to end the program.

And in July, President Biden tapped former West Virginia health commissioner Dr. Rahul Gupta to be director of the Office of National Drug Control Policy. But some have criticized Gupta’s failure while commissioner to protect syringe access in West Virginia, which has consistently had the highest rate of overdose deaths in the US in recent years, according to the CDC. The state severely restricted syringe exchange earlier this year, amid an HIV outbreak the CDC described as the “most concerning” in the country.

June 17, 2021 marked the 50th anniversary of the War on Drugs, in which President Richard Nixon declared drug abuse “public enemy number one.” Yet last year was by far the most deadly period in American history for drug overdoses. More than 92,000 people lost their lives, according to preliminary data from the CDC. This in spite of more than $1 trillion spent over four decades by the United States to enforce its drug policy.

The harm reduction movement offers a vastly different approach. It has also acknowledged, Szalavitz notes, that the drug war is historically documented to be deeply rooted in racism, not science, and has been disproportionately waged against people of color. “The essence of harm reduction,” Szalavitz, writes, “is compassion and respect for the inherent dignity and value of human life.”

“A philosophy and strategy developed by drug users and researchers for drug users, however improbably,” she continues, has “gone global—and proved to be a gift to public health.”