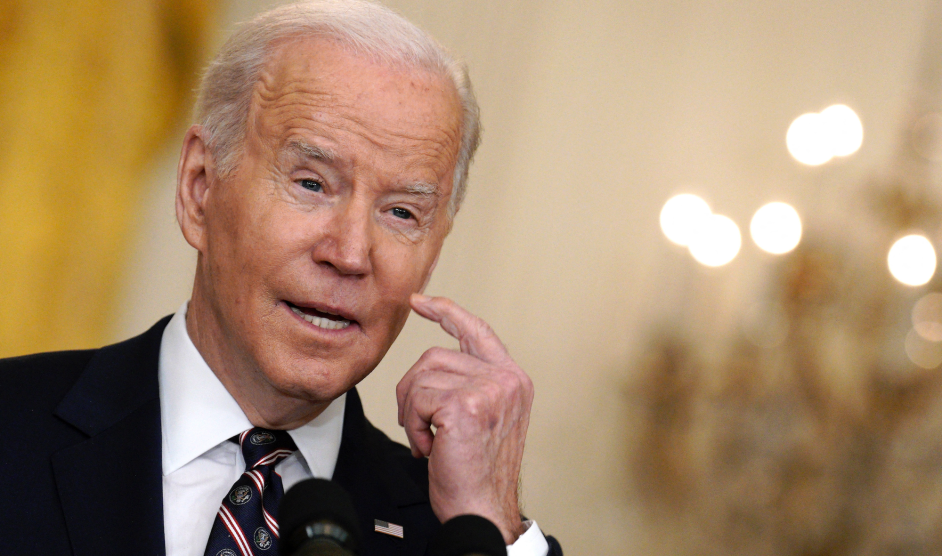 As Russia seems poised to invade Ukraine, Republicans have taken to criticizing President Biden’s foreign policy in variegated pouts. The Wall Street Journal’s editorial board bemoaned a “complacent West.” Sen. Lindsey Graham decried Biden for “NOT seizing the moment.” A growing chorus of whataboutism from J.D. Vance and Lauren Boebert has argued that Biden cares more about securing the Ukrainian border than he does the US-Mexico border.

But nothing has quite topped the meme—emboldened by the body language experts at the House Republicans’ Twitter account—that Biden has shown “weakness on the world stage” by walking out of a room.

This is what weakness on the world stage looks like. pic.twitter.com/0Krq48gbIy

How dare Biden—after announcing sanctions—walk out of a room with such weakness, using his legs.

This is a weird apotheosis of the growing “weakness” theory and adds to the wildest thing to have emerged in the right’s poo-pooing of Biden’s foreign policy: the assertion that none of this could have happened under Donald Trump because Vladimir Putin was too intimidated by his American counterpart. Here was the editor of the National Review as well as Marco Rubio making the case earlier this week:

The sheer unpredictably of Trump, his anger at being defied or disrespected, his willingness to take the occasional big risk (the Soleimani strike), all had to make Putin frightened or wary of him in a way that he simply isn’t of Joe Biden https://t.co/NVhAGneN62

Lowry’s logic conveniently omits the many occasions of Trump lavishing praise on Putin, downplaying Russian interference, and the Trump administration’s efforts to undermine sanctions against Moscow. But its fallacy was only further exposed after Trump on Tuesday commended Putin’s moves in Ukraine as “very savvy” and “genius.”

“I went in yesterday and there was a television screen, and I said, ‘This is genius,'” Trump giddily told a right-wing podcast just hours after Biden announced tough new sanctions against the Kremlin. “Putin declares a big portion of Ukraine—Putin declares it as independent. Oh, that’s wonderful.”

So far, the right has been overwhelmingly quiet on Trump’s effusive new praise of a foreign adversary. That silence is damning for sure, but perhaps not as damning as how one Fox News guest tried to spin the remarks last night:

Guest claims Trump is pretending to be subservient to Putin to troll the media pic.twitter.com/jEIJaNSKZe

Of course, all of this is yet another entry into the right-wing complaints that Biden is too weak. Fox News has been all over that narrative for weeks. But will Republicans stick with Trump in light of his latest public admiration for Putin? We’ll see what mealymouthed excuses they come up with next, but at least Tucker Carlson has been forthcoming with his off-the-rails argument that Putin, because he hasn’t called you a racist, is better than a Democrat.

So, that’s the deal. You can be a racist, a plutocrat, and a jerk. But, please god, don’t walk out of a room.