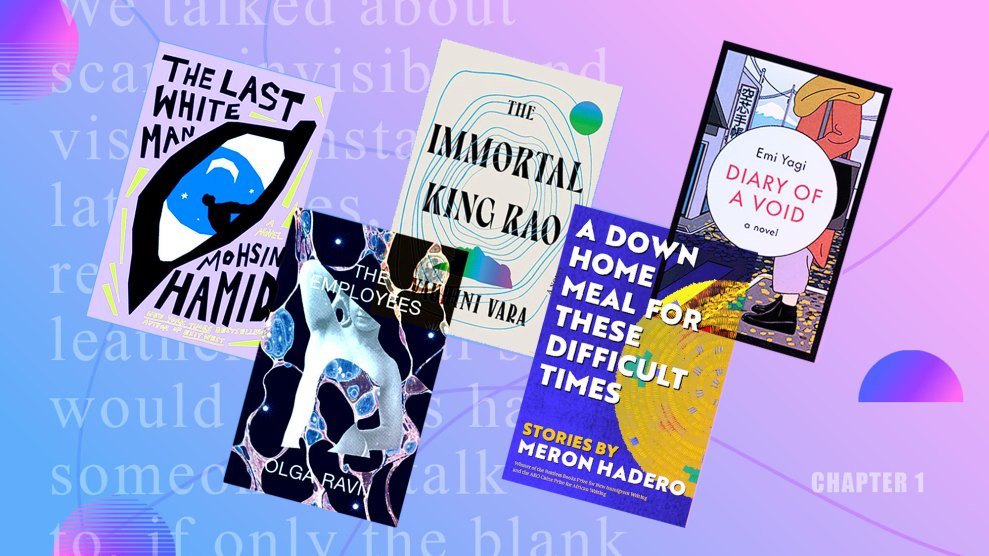 Several of 2022’s most anticipated novels offer unique perspectives on society’s thorniest issues, from racism to workplace harassment. Call it a summer fiction reading list for the socially engaged.

Diary of a Void, by Emi Yagi

Ms. Shibata is never officially assigned the menial tasks of her workplace—making coffee, tidying, answering the phones—but since she’s the only woman on staff, her colleagues expect her to oversee them. Annoyed by the tedious sexism, Shibata announces that she is pregnant and unable to continue the extra work. We follow her fake pregnancy week by week, and though there is no child, something real grows within Shibata. Yagi’s debut, translated from Japanese, is more than its unique and amusing premise; it’s a surreal, engrossing meditation on loneliness, womanhood, and what it actually means to have a work-life balance. —Ruth Murai

A Down Home Meal for These Difficult Times, by Meron Hadero

Beyond its familiar framing as a border story, a culture-war story, and a state violence story, immigration is an intimacy story, about what it means to hold: What a suitcase holds, and doesn’t. What a memory holds, and for how long. What a refugee’s notebook holds before it’s taken. And what a future holds for those allowed to pursue one. This richly detailed, subtly impressionistic short-story collection—by the first Ethiopian-born writer to win the AKO Caine Prize for African Writing—pulls at threads of geography, language, generation, race, and gender. “We talked about scars, invisible and visible, instant and latent ones, all real,” a character recounts. “He gave me a leather journal so I would always have someone to talk to, if only the blank page.” Hadero’s page shines. She brings to bear aspects of her own path from Ethiopia to Germany to the United States, expanding instead of narrowing the range and representation of immigrant experiences. If displacement is a story of holding, it’s also, in Hadero’s telling, a holding of hope that readers and reporters, refugees or not, will unpack tropes instead of resort to them. —Daniel King

Read the rest of our summer reading series

The Employees, by Olga Ravn

God died, and soon the Earth will too, but in this Danish dystopian novel told in vignettes from laborers floating on a spaceship in the 22nd century, work remains. The narrative takes the form of an internal audit of productivity aboard the ship. Workers, both humans and “humanoids,” record what the author has called “little testimonies,” which mix corporate speak with the banal and even poetic. “I’ve developed disproportionate strategies in dealing with emotional and relational challenges,” one worker explains, “but I know that I’m living. I live.” The usual sci-fi question remains—what makes us human?—but this time the robots are red herrings. I guess I’d ask: How was work today? Do you feel alive? —Jacob Rosenberg

In this mind-bending tale, society has splintered in two. On one side is the Shareholder Government, devoted to “Social Capital” and ruled by a master algorithm; on the other, the Blanklands, islands populated by anarchist Exes. Athena’s father, inventor of the algorithm, has injected her with his memories. As she pieces together his rise, from son of a Dalit coconut farmer to global superstar, she, and we, must make sense of the price of technological conquest. Vara, who identifies as a Dalit writer, intricately layers together an epic family saga with an inquiry into capitalism’s limitations and an eerie imagining of where tech may take us. Prescient, considering she began it years before Meta ruled the world and Elon Musk began trying to embed computer chips in our brains. —Maddie Oatman

When Anders awakes and sees that his white skin has turned brown overnight, his first emotion is confusion. But the feeling quickly morphs into rage and panic. He calls out of work and tries to remain inconspicuous, at first telling only his childhood-friend-turned-lover Oona of his transformation. Eventually, the condition begins to spread, as more and more white people suddenly find themselves no longer white. Anders and Oona must navigate this changing world as well as grapple with their own identities and perceptions of others. Hamid, also the author of the Booker-shortlisted Exit West, delivers an emotionally gut-punching exploration of race, privilege, grief, and white anxiety.  —Arianna Coghill