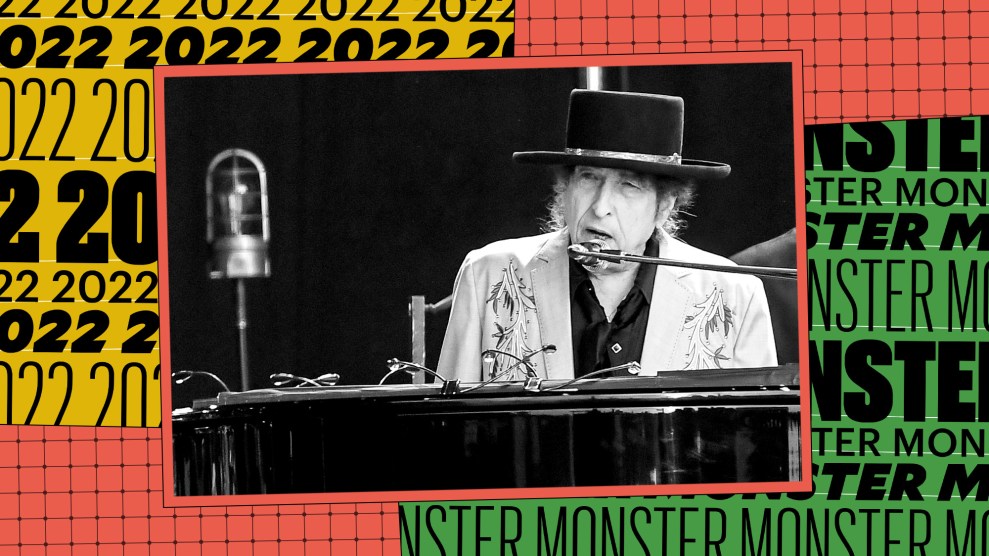 As a reformed member of the Bob Dylan worship cult, I take no pleasure in reporting that the jig is up.

A few years ago, I regarded Dylan with the deference usually reserved for a god. His 1960s run was miraculous, his lyrics Biblical. Everyone who has fallen under the Dylan spell says the same thing: that once it gets you, it gets you good, becoming, for years or decades, the defining aspect of your life. Everyone remembers the song that snared them. For me, it was “Stuck Inside of Mobile With the Memphis Blues Again.” For New Yorker editor David Remnick, it was the song that preceded mine on Blonde on Blonde, “I Want You.” “I was hooked,” Remnick writes of hearing the song on a compilation record. “For a long time, everything I cared about, every book or song, somehow came out of this obsession.”

Despite the disdain Dylan outwardly shows for his rabid fanbase, he leans into the mystical aspects of his persona, subtly encouraging the mania. In both his autobiography, Chronicles, and a 2004 60 Minutes interview, he suggests that his decision to tour for the rest of his life was divinely ordained. But anyone who has actually seen one of these shows would likely disagree.

The quality of Dylan’s vocals has fluctuated for the last 30-odd years. When I first saw him live in 2019, I clung to the illusion that I was in the presence of an otherworldly being. His clear vocals rang out over an energetic backing band. When a security guard threatened to kick me out of the theater for sneaking a photo of the star on my phone, I vowed to delete it and repented.

But the spell could only last so long. This summer, Dylan put on a show in Denver so abysmal that it would have sent audiences fleeing had the performer been anyone else. The lyrics were unintelligible, the harmonica shrill, the voice mistakable for Scooby Doo’s. As I looked at the audience of unsmiling faces, I suddenly understood the spectacle for what it was: an 81-year-old man, past his prime, debasing himself before suckers so starstruck that they would pay $80 or more just to glimpse him in the flesh. I had fallen for it.

I’m not the first person to become disillusioned by Dylan. Remnick recounts that he had wanted to publish an excerpt from Chronicles in The New Yorker, but Dylan demanded to be on the cover of the magazine. (He did make the cover, in cartoon form, in 2016.) When Remnick said no—because, um, had Dylan ever seen the cover of The New Yorker?—Dylan took his business to Newsweek. Remnick describes his frustration with polite reserve. “That stung. A music magazine I might have understood. But Newsweek?” He continues:

I’d been careless. We had only a vague agreement. And so that was that. Dylan appeared on the cover of the October 4, 2004, issue of Newsweek. By then he was in his mid-sixties and looked like Vincent Price wearing Hank Williams’s clothes: pencil mustache, white Stetson, and cowboy suit. I had other unkind thoughts. But what was the point?

More than a year later, I got a call from Jeff Rosen. “Bob’s got a new album,” he said. “We wondered if you want to hear it.”

There was no use in relitigating the past. And, yes, I wanted to hear it.

Dylan’s betrayals are not limited to the personal. In 2011, Dylan created a series of paintings based on others’ photographs and attempted to pass them off as his own. Yet Rob Oechsle, one of the photographers who accused Dylan of plagiarism, told NPR, “When he comes on the radio, I still lean over and turn up the dial.” No matter how grave Dylan’s offense, we just can’t quit him.

This year, Dylan fans who had purchased autographed copies of his new book, The Philosophy of Modern Song, realized that their $599 tomes had been signed with an autopen, despite publisher Simon & Schuster’s assurance, via a letter of authenticity, the “the copy of the book you hold has been hand-signed by Bob Dylan.” (The book, a series of essays about 66 songs, contains just four performed by women and reads more like your grandpa’s nostalgic ramblings than a music critic’s elucidating analysis.) After initially refusing, the publisher caved and issued refunds. In a Facebook post, Dylan apologized for the fiasco and attributed his use of auto-pen to a “bad case of vertigo.” “With contractual deadlines looming, the idea of using an auto-pen was suggested to me, along with the assurance that this kind of thing is done ‘all the time’ in the art and literary worlds,” he wrote. “Using a machine was an error in judgment and I want to rectify it immediately. I’m working with Simon & Schuster and my gallery partners to do just that.”

Notes of forgiveness abound in the comments section. And, really, I don’t blame Dylan for relying on auto-pen. His apology seemed genuine—writers tend to be good at that sort of thing—and the error seems attributable to the publisher more than anyone else. Nor do I blame Dylan for continuing to tour even when his performances inflict nothing but misery on the weary listener. Touring has been the main function of his life for more than 30 years, and he does, after all, occasionally perform a song worth hearing. Others have even found his late performances transcendent.

And I don’t blame him for his hubris, after 50-plus years of adulation from music critics and fans (save the rare pan). This is a man who won the Nobel Prize in Literature despite writing the song “Wiggle, Wiggle.” If I were in his position, I might take a few artistic liberties, or publish a few unreadable books, as well.

Instead, I fault Dylan for being human, and for all the attendant wrinkles and imperfections and greed. As comforting as it is to recognize that my idol is really just a kid from Minnesota, with all the same basic needs and desires and bodily functions as anyone else, I resent the Dylan industrial complex, the machine under which spending $600 for an autographed book becomes a reasonable thing to do. And, after years of breathless loyalty, I reject the notion that Dylan can do no wrong.

Dylan played with the opposing ideas of himself as god and as human when he sang on a recent song, “I ain’t no false prophet.” No matter what he meant, I should have listened to him.