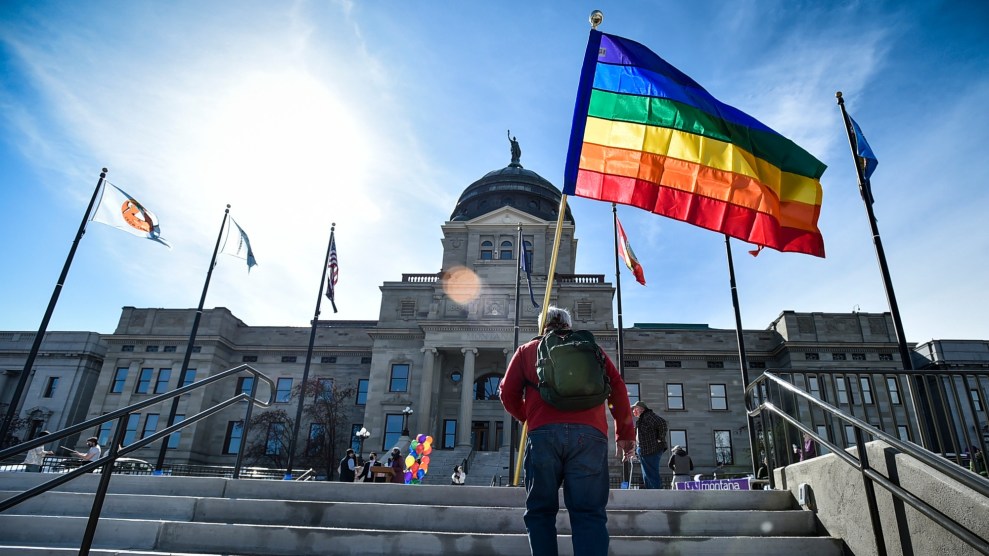 April 6: After a majority vote in both chambers of the state Capitol, Gov. Asa Hutchinson’s veto is overridden. The bill will go into effect as soon as August 1.

April 5: Gov. Asa Hutchinson vetoes the bill, which he condemns as “overbroad” and “extreme.” It’s still possible the legislature will overrule his veto.

The Arkansas bill puts doctors who provide or refer for transition-related care at risk of professional sanctions and prohibits the state’s Medicaid program from covering such care. After passing the Senate 28-7, the bill is now headed to Gov. Asa Hutchinson’s desk. Just last week, Hutchinson signed the state’s own version of a trans athletics ban into law, as well as a bill that allows doctors to turn away patients if they have religious or moral objections to their care.

Arkansas is the first state to pass a trans health care ban, but more could be coming: At least 18 other states have considered similar proposals this year.

“This is the first year we’re seeing a number of these bills actually pass and get enacted into law,” says Chase Strangio, the ACLU’s deputy director for transgender justice. “And I don’t think we really even have a good sense of how catastrophic it will be.”

Strangio and other advocates warn that these bills, if passed, will come with a body count. As I’ve previously reported:

“It’s an attack on doctors and science, and a direct shot at trans youth—some of the most vulnerable folks who are trans,” says [Ivy] Hill from the Campaign for Southern Equality. “It worries me for them in terms of their actual access to care. But it also worries me for them when I think about trans youth suicide rates.” The evidence bears out Hill’s concerns: Trans Lifeline, America’s first helpline established specifically for transgender folks, for example, saw average daily calls double the week the Trump administration rolled back Obama-era protections allowing trans kids to use the bathroom of their choosing. A recent survey by the Trevor Project found that more than 90 percent of respondents (all LGBTQ youth) said that recent politics had negatively influenced their wellbeing.

The failure of South Dakota’s sports ban, meanwhile, was hardly a sign of state legislators’ support for trans kids. The bill sailed through both chambers of the state house, with cheerleading from Gov. Kristi Noem. Only once it reached her desk did she reconsider, refusing to sign the bill unless it was amended to, among other things, exclude college sports amid threats of an NCAA boycott. Noem was pilloried by conservatives who accused her of “caving to the NCAA,” which has vehemently opposed such bans. The legislature adjourned without making Noem’s suggested changes, effectively killing the bill because it wasn’t conservative enough.

“Let this be a lesson to governors considering anti-transgender legislation,” says Human Rights Campaign President Alphonso David. “Anti-transgender bills are too much of a risk even for one of the country’s most extreme governors.”

Nonetheless, Arkansas, Mississippi and Tennessee have all enacted such laws in the past two weeks. Idaho codified a similar measure into law last year, though it has been held up in a lengthy court battle.

“These kids have hopes and dreams, whether it’s to play sports or to just live their life and get health care,” Strangio says. “At its core, this is about young people hoping to find a path for themselves in the world, and the government using all of its resources and power to take that away.”