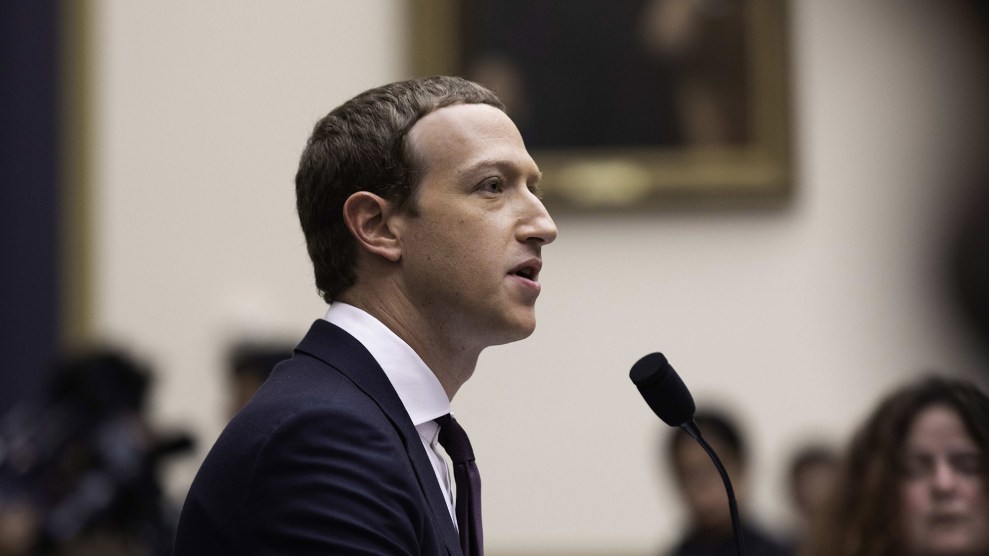 In April, the civil rights group Muslim Advocates sued Facebook and four of its top executives for failing to implement the company’s pledge to remove hate groups from the platform. Now, Facebook is looking to get the case tossed out, with its team of superstar lawyers making boundary-testing legal arguments about the breadth of the social media company’s legal immunity.

The allegation against Facebook is essentially fraud. In 2018, Facebook CEO Mark Zuckerberg testified before Congress that “if there’s a group that—their primary purpose or—or a large part of what they do is spreading hate, we will ban them from the platform.” Not long before, Muslim Advocates had sent the company a list of 26 anti-Muslim groups on Facebook. As Zuckerberg made his promise, 23 remained active. Specifically, the group argues that Zuckerberg and other executives deceived Congress under oath by claiming the company removes hate groups from the platform when they learn about them.

Here’s the crux of the case, as Mother Jones reported in April:

In a complaint filed in DC Superior Court with the civil rights firm Gupta Wessler, Muslim Advocates lays out numerous instances where Facebook was alerted to anti-Muslim content that violates the platform’s rules but failed to remove it. The complaint contrasts these incidents with statements from CEO Mark Zuckerberg and other top officials promising—including in sworn testimony to Congress—that when Facebook becomes aware of content that violates its policies, it takes it down…

That gulf between promises and practices, the suit alleges, is illegal under the District of Columbia’s expansive consumer protection statute. “Facebook’s executives might believe that they are legally entitled to operate a social media platform that acts as a cesspool for hate,” the complaint states. “But what its executives certainly cannot do is misrepresent to Congress, national civil rights leaders, and its users in the District of Columbia that Facebook does, in fact, remove or take down content that violates its own standards and policies while routinely refusing to do so. Facebook has no free license to make false or deceptive statements.”

Facebook denies any wrongdoing and is asking the court to toss out the case. Representing the tech company are two giants of the legal world. The lead counsel is Donald Verrilli, the former US Solicitor General under President Barack Obama, whose clever arguments before the Supreme Court saved the Affordable Care Act. After serving at the “mountaintop” of American law, he joined a law firm that often represents Facebook.

Defending Facebook, Verrilli and Kravis have brought a possibly winning but definitely awkward argument to the fore. It hinges on a broad interpretation of the hotly debated Section 230 of the Communications Decency Act. This section of the 1996 law—which members of Congress on both sides of the aisle are currently interested in revising—protects internet companies from liability for third-party content published on their websites. Verrilli and Kravis argue that because Muslim Advocates’s claim involves Facebook’s handling of third-party content, the company is immune.

“Plaintiff attempts to avoid the CDA by asserting misrepresentation claims based on statements that Plaintiff alleges are false and misleading because of Facebook’s purported failure to ‘remove hateful and harmful content’ from its platform,” Verrilli, Kravis, and a third attorney write in their motion to dismiss. “Courts have consistently rejected such artful pleading where, as here, plaintiff’s theory of liability turns on decisions by the defendant regarding third-party content, and therefore treats the defendant as the publisher of that content.”

Essentially, Facebook is arguing that it can’t be held liable in court for misrepresenting to Congress how it handles third-party content. This is an inopportune argument to make when both Republicans and Democrats want to reform Section 230 and rein in the power of Big Tech. Just this week, the Senate confirmed Lina Khan, a progressive critic of big tech, to the Federal Trade Commission on a broad bipartisan vote. If Verrilli and Kravis are right that Congress created a law that allows internet companies to misrepresent themselves to lawmakers, then they might be more inclined to change the law.

This argument is particularly notable coming from Kravis. In 2019, he secured Stone’s conviction for lying to Congress. Now, he’s arguing that, under certain circumstances, his new client can get away with just that.