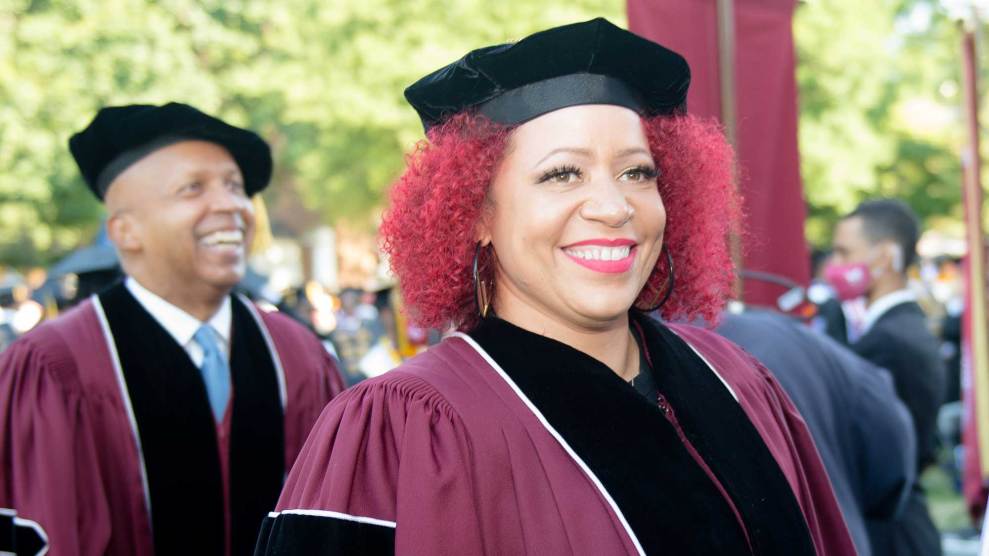 Pulitzer Prize–winning journalist Nikole Hannah-Jones was granted tenure by the University of North Carolina–Chapel Hill Board of Trustees on Wednesday evening, the latest twist in a monthslong saga that has led to bitter debates about the influence of big donors on hiring decisions, the increasingly partisan boards that govern public universities, and the conservative freakout over critical race theory.

It is still not clear, however, whether Hannah-Jones will join the faculty at UNC–Chapel Hill, where she received a master’s degree in 2003. Her start date was originally set to be Thursday; in a statement released Wednesday, Hannah-Jones said, “These last weeks have been very challenging and difficult and I need to take some time to process all that has occurred and determine what is the best way forward.”

On Thursday morning, the journalism school dean, Susan King, told me that Hannah-Jones hadn’t indicated to her whether she’d decided to accept the teaching position, and that she deserved some time to let everything sink in. “Nikole Hannah-Jones isn’t just a great journalist—she’s a once-in-a-generation journalist,” King said.

In late April, the journalism school announced that the creator of the New York Times‘ award-winning and controversial 1619 Project would become the Knight Chair in Race and Investigative Journalism, noting that Knight chair professorships “are designed to bring top professionals to classrooms to teach and mentor students.” Hannah-Jones, the winner of a MacArthur “genius grant” in 2017, had become increasingly involved with the school in recent years, culminating in her induction into the NC Media & Journalism Hall of Fame earlier that month.

But almost immediately, the announcement faced stiff criticism from conservative groups, with former Wisconsin Gov. Scott Walker, now the president of the Young America’s Foundation, calling the appointment “shameful.” And when Hannah-Jones’ appointment came up for review in May before the Board of Trustees, it chose not to make a tenure decision—leaving the journalism school to offer Hannah-Jones a five-year fixed-term position with the opportunity for a future tenure review. “It’s disappointing, it’s not what we wanted, and I am afraid it will have a chilling effect,” King told NC Policy Watch at the time.

According to the Washington Post, it was unclear how much conservative complaints about the 1619 Project affected the board’s choice to punt on Hannah-Jones’ tenure decision. The chair of the board, Richard Y. Stevens, said in May that it wasn’t out of the ordinary for trustees to scrutinize “candidates that don’t come from a traditional academic-type background,” even though the journalism school’s two previous Knight chairs, both of whom were white and didn’t come from traditional academic backgrounds, had had no problems receiving tenure. Four of the board’s 13 members are appointed by the Republican-controlled state legislature and another eight by the UNC system Board of Governors, an overwhelmingly conservative body that includes GOP megadonor Art Pope. (The final trustee is the UNC–Chapel Hill student body president.)

But an investigation by The Assembly‘s John Drescher uncovered emails sent by Walter Hussman Jr.—the publisher of the Arkansas Democrat-Gazette and a UNC–Chapel Hill alum, whose $25 million donation in 2019 got his name on the school and his journalistic core values posted in the building’s foyer—to university leaders about his specific concerns with the 1619 Project. As Drescher reported:

“I worry about the controversy of tying the UNC journalism school to the 1619 project,” Hussman wrote in a late December email to King, copying in [Chancellor Kevin] Guskiewicz and [Vice Chancellor for University Development David] Routh. “I find myself more in agreement with Pulitzer prize winning historians like James McPherson and Gordon Wood than I do Nikole Hannah-Jones.

“These historians appear to me to be pushing to find the true historical facts. Based on her own words, many will conclude she is trying to push an agenda, and they will assume she is manipulating historical facts to support it. If asked about it, I will have to be honest in saying I agree with the historians.”

The Hussman emails added a new layer to an already complicated and ugly situation. And in a subsequent interview, the millionaire donor—whose career, as Slate‘s Julia Craven points out, isn’t exactly a lesson in playing it down the middle—poured fuel on the fire, saying, “If she’s in favor of [the core principles of journalism], maybe we could work together. But if she’s opposed to them, I’m going to wonder why did she want to go to work at a journalism school where she’s opposed to the core values of the school.” Journalism faculty were quick to push back in the name of academic freedom. (Hussman has denied trying to affect the hiring process, saying in an interview, “I haven’t said to Susan King, ‘Do not hire Nikole Hannah-Jones.’ I never said that. I never said, ‘If you hire Nikole Hannah-Jones it could affect our commitment to the university or our donation.’ I never said that.”)

Last week, Hannah-Jones’ legal team notified the university that she would not teach at the school without tenure, citing the Hussman emails and interviews as reasons for the decision. “Since signing the fixed-term contract,” her lawyers wrote, “Ms. Hannah-Jones has come to learn that political interference and influence from a powerful donor contributed to the Board of Trustees’ failure to consider her tenure application. In light of this information, Ms. Hannah-Jones cannot trust that the University would consider her tenure application in good faith during the period of the fixed-term contract.”

Students, alumni, celebrities, and faculty—including professors at other institutions across the country—have rallied in recent weeks in support of Hannah-Jones. Her drawn-out battle, though, has led a significant number of Black professors at UNC–Chapel Hill to consider leaving the school, with some of them noting their residual anger and frustration over the way the administration and the UNC system botched the removal of the Confederate statue known as Silent Sam. Lisa Jones, a Black professor heavily recruited by the university’s chemistry department, withdrew her candidacy to join the faculty, writing, “I cannot see myself accepting a position at a university where this decision stands.”

In the end, Hannah-Jones and her supporters won out. At the same time, the reputational damage done to the university by the trustees’ machinations, Hussman’s meddling, and the administration’s relative silence will be felt for years. But it doesn’t seem like the Board of Governors is all that concerned: Just last week, it declined to reappoint law professor Eric Muller to the UNC Press board, even while green-lighting his two colleagues up for reappointment. Sources told NC Policy Watch that Muller was singled out for his public statements on the school’s handling of the Silent Sam fiasco and broader issues regarding UNC–Chapel Hill’s failure to properly reckon with its racial history.

As one member of the Board of Governors said, “They’re standing in the way of the system and how it usually works.”

Note: Ian Gordon is a graduate of the UNC–Chapel Hill journalism school and a former member of its alumni board.