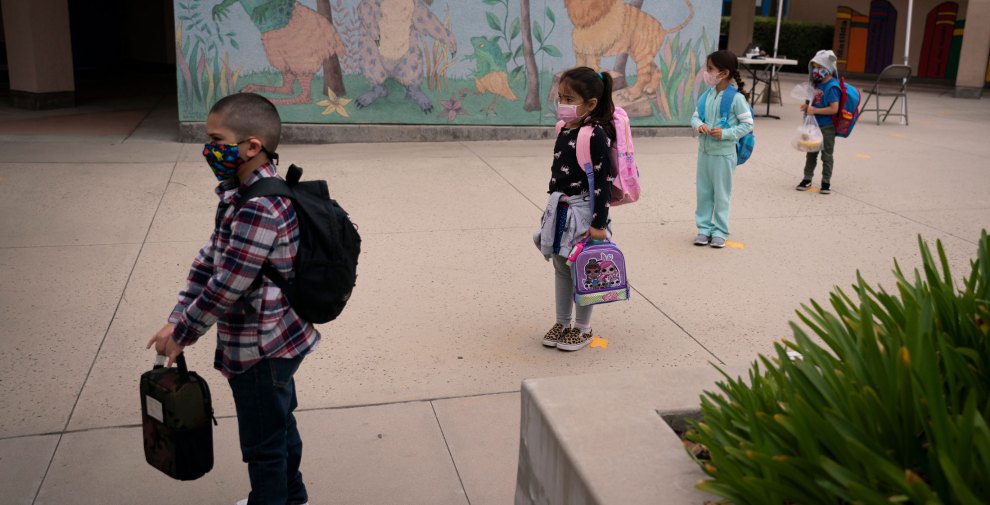 Socially distanced kindergarten students wait for their parents to pick them up on the first day of in-person learning at Maurice Sendak Elementary School in Los Angeles. Jae C. Hong/AP

As kids across the country settle into the rhythm of outbreaks and school closures during the second pandemic school year, a staggering number of children are having to do so without their parents or caregivers. A study in the academic journal Pediatrics, published Friday, found that more than 140,000 children lost caregivers or parents to COVID-19 between April 2020 and June 2021. CDC epidemiologist Susan Hillis, a lead author of the study, told NPR that that number has risen to roughly 175,000 today.

Making this more heartbreaking is the uneven way the affliction has been felt by Black, Latino, and indigenous children. Researchers in the Pediatrics study found that American Indian/Alaska Native children were 4.5 times more likely to lose a parent or caregiver to COVID compared to white children. Black children were nearly two and a half times more likely, while Hispanic children were twice as likely. “The highest burden of COVID-19-associated death of parents and caregivers occurred in Southern border states for Hispanic children, Southeastern states for Black children, and in states with tribal areas for American Indian/Alaska Native populations,” the authors wrote.

This reflects the cruel national reality that the pandemic has discriminated in whom it affects, resulting in disproportionate job loss, infections, and even death for people of color. This racist reality isn’t limited to adults. Rather, it is interconnected with how children suffer. Among the 4.9 million children under 19 years old who have contracted COVID over the last year and a half, children of color have been impacted the most. In mid-September, an analysis by the Kaiser Family Foundation noted that Black and Latino children were not only more likely to contract COVID but also more likely to be hospitalized for it. Even though children rarely die of COVID, Black children alone were roughly 2.7 times more likely to die of COVID than white children. What’s more, Black and Latino children together account for more than 70 percent of those who contract MIS-C, a rare inflammatory disease associated with COVID that has infected just over 5,000 kids nationwide. And in addition to experiencing more illness, studies by McKinsey & Company and the NWEA, a nonprofit that conducts academic assessments, have found deep learning losses for children of color during the pandemic.

But why do disparities exist among children? The social and economic barriers their parents face, they also face. And those barriers could not only determine whether children get infected and become hospitalized by the virus, they can also determine whether they have adequate access to the vaccines that would help protect them from future suffering. Children of color are also disproportionately afflicted with underlying health conditions that put them at greater risk for hospitalization once they contract COVID. Beyond that, CDC researchers have noted that Black and Latino adults are “disproportionately represented among essential workers unable to work from their homes,” raising the risk of exposure for children and other family members to contract the virus. “In addition, disparities in social determinants of health, such as crowded living conditions, food and housing insecurity, wealth and educational gaps, and racial discrimination, likely contribute to racial and ethnic disparities in COVID-19 and MIS-C incidence and outcomes,” government researchers wrote in a study last September.

All of this speaks to the systemically racist underpinnings of American society. In thinking about this new study, I’m reminded of something Michigan epidemiologist Debra Furr-Holden told me when I examined how her hometown of Flint managed to close disparities during the pandemic:

Getting “upstream” of the disease itself, to the political-economic factors that enable its spread and amplify its effects, was hard work. Furr-Holden was under no illusions about why. “We’ve never been honest as a nation about how truly inequitable our society is—how the systems and structures are set up by their very design for some people to prosper and have better access and more opportunity than others. And there’s a cost to it,” Furr-Holden told me. “So many Black and brown people, so many rural communities, getting hit so hard by this pandemic has cost our nation millions if not billions of dollars. Inequity has cost us tremendously. All those Black and brown people that then were fighting for beds and ventilators and hospitals were the reason some of these nice middle-class and wealthy white folks weren’t able to get on those ventilators. Literally, inequity costs us all.”

And it can’t be repeated enough: It costs children of color, and their futures, even more.