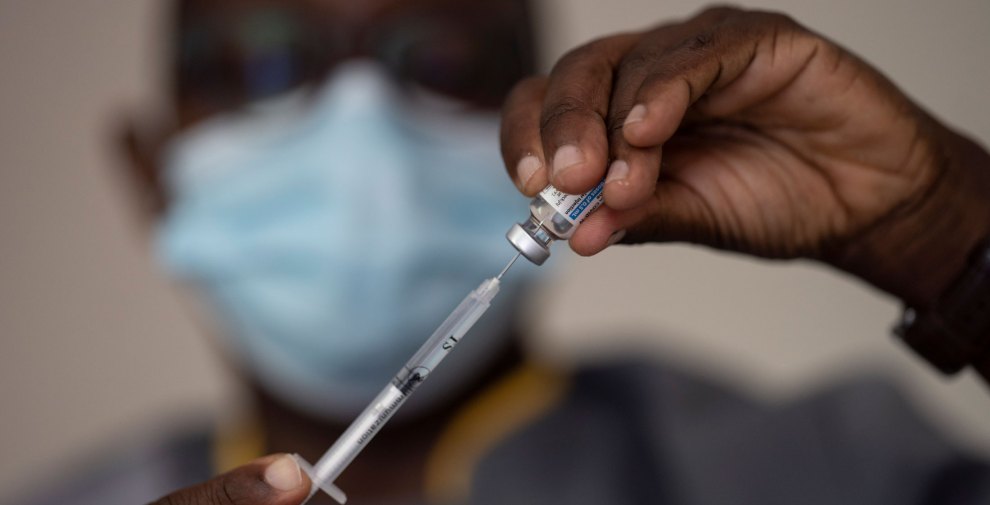 A health worker administers a dose of the COVID-19 vaccine by Johnson & Johnson in Dakar, Senegal. Leo Correa/AP

The coronavirus is a rapidly developing news story, so some of the content in this article might be out of date. Check out our most recent coverage of the coronavirus crisis, and subscribe to the Mother Jones Daily newsletter.
Over the weekend, the New York Times reported that Moderna, the Massachusetts-based pharmaceutical company that is producing the most effective COVID vaccine, had shipped almost all its doses to rich countries—more than any other pharmaceutical company with a vaccine on the market. Citing data company Airfinity, the Times reported that:

About one million doses of Moderna’s vaccine have gone to countries that the World Bank classifies as low income. By contrast, 8.4 million Pfizer doses and about 25 million single-shot Johnson & Johnson doses have gone to those countries.

Of the handful of middle-income countries that have reached deals to buy Moderna’s shots, most have not yet received any doses, and at least three have had to pay more than the United States or European Union did, according to government officials in those countries.

Moderna’s chief executive Stéphane Bancel told the Times that the situation was out of the company’s control, noting that the company sought help from governments to help pay to expand its production capacity. He added that “it is sad” that the vaccine didn’t reach poorer countries. Meanwhile, the Times reports Moderna “expects its vaccine to generate at least $20 billion in revenue this year, which would make it one of the most lucrative medical products in history.”

At one point in May, Moderna offered the African Union doses for just $10 a pop—significantly less than it charged the US and European countries—but they wouldn’t be available until 2022. African Union officials told the Times that the proposal collapsed because of that significant delay. That same month, Moderna committed to sending 34 million doses in 2021—and 466 million in 2022—to Covax, an international program meant to share vaccines with lower income countries. But a Covax spokesperson told the Times the program hasn’t received any of Moderna’s doses from the company (though it has distributed Moderna doses donated by the United States).

The choices by Moderna, which disputed the Times‘ reporting that it sent just 900,000 doses to poor countries, speaks to the growing difficulties low-income countries face as they try to obtain life-saving vaccines. To some, like World Health Organization Director General Tedros Adhanom Ghebreyesus, the pursuit of booster shots while poorer countries struggle to obtain doses reeks of “vaccine injustice.” And the organization’s Africa director, Matshidiso Moeti, slammed countries like the United States that distributed booster shots before they distributed more doses to poorer countries, calling it “a mockery of vaccine equity.”

Even as six billion doses of various vaccines have been distributed across the world, 56 countries, most of which were in Africa and the Middle East, failed to vaccinate at least 10 percent of their population, falling short of the WHO’s target by the end of September.

As my colleague Lil Kaslish reported in August, the continued unequal access to vaccines could prolong the pandemic, putting, well, everyone at risk:

Administering boosters in the US while much of the world cannot access vaccines isn’t just ethically dubious. Experts say this could drag the pandemic on even longer, especially while Delta and other variants continue to travel. As long as vaccination rates are low in other parts of the world, more robust variants will continue to crop up.

While all eyes are on Moderna currently, don’t forget it’s not alone in its behavior. This summer, the Times also revealed that Johnson & Johnson was producing its vaccines in South Africa, only to export them to wealthier countries.