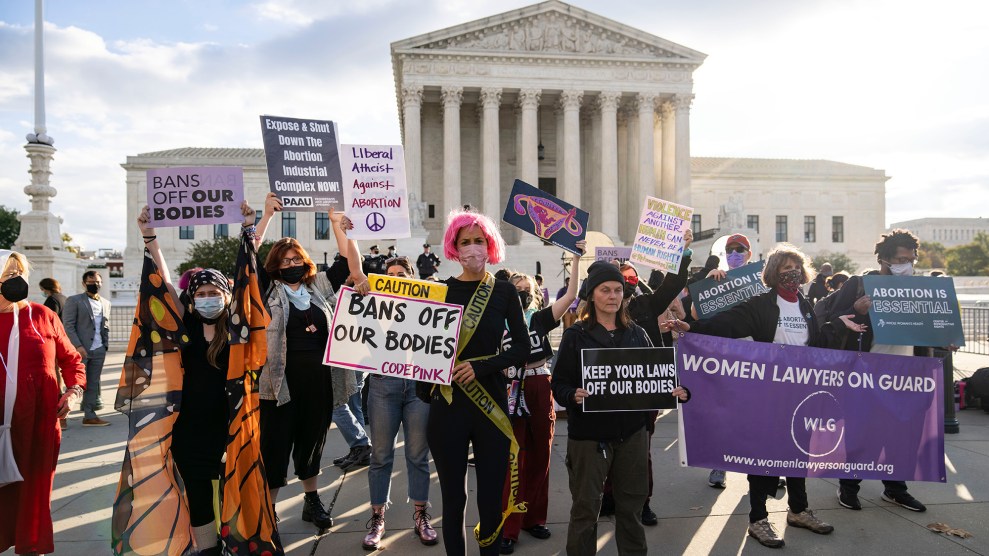 The Supreme Court heard oral arguments today challenging and defending Texas’ new abortion law through a pair of cases—Whole Woman’s Health v. Jackson and United States v. Texas. Both were fairly technical in nature: The first took on the standing of the state’s six-week abortion ban, which also threatens anyone who “aids or abets” an abortion with a civil lawsuit that could literally be filed by any private citizen. The second addressed the Department of Justice’s ability to intervene when a state passes a law that infringes on its residents’ constitutional rights. As a result, listening to today’s arguments, you could easily forget what is actually at stake: The thousands of people who have already suffered the gargantuan consequences of the law over the two months it’s been in effect—a number that grows each and every day this law continues to stand.

As I wrote ahead of the arguments:

It’s easy for outsiders to lose sight of the issue at hand in all the legal hubbub, but the fact is that this is a law that is causing very real harm to pregnant Texans, who are now being forced to seek care out of state or on the internet. I have spent the past couple months reporting out of reproductive health clinics for a book project I’m working on, and I’ve seen Texans seeking care in Alabama, Kansas, and Tennessee. The one that sticks with me was a young woman who came to Huntsville, Ala. after traveling to Jackson, Miss., where she was told she was barely over that clinic’s gestational limit. She had been traveling for almost a week and was exhausted. She told me it was only the second time in her life that she had ever left Texas.

Zaena Zamora, executive director of the Frontera Fund, a nonprofit that works to help pregnant people in deep southern Texas to get abortion care, was unsurprised by this anecdote. “The day after SB 8 went into effect, we had a caller who had to travel 15 hours overnight [by car] to Wichita, Kansas—she was seven weeks pregnant,” Zamora says. She is seeing unprecedented demand for help with travel and logistics. She told me that the group spent more on travel support just in the month of October than it did in the entire year of 2020.

It’s not surprising that the court’s focus today was procedural rather than personal, but it is nonetheless frustrating to consider how far removed the people who are affected remain from the legal process. In all the procedural quibbling, the word “abortion” was only said a handful of times, and very little was said about the way the law creates multiple hurdles to abortion care, and, for some, impedes abortion access altogether and forces the pregnant person to carry to term—an outcome that has documented negative socioeconomic, mental, and physical consequences.

Nearly as frustrating were the gendered dynamics of the courtroom. The sole female lawyer, Elizabeth Prelogar, who is the newly inducted US solicitor general, was repeatedly interrupted and patronized by male justices, Samuel Alito and Neil Gorsuch in particular, while the men of the defense were given noticeably more room to make their case. To be sure, as columnist and legal expert Chris Geidner pointed out on Twitter, the defense approached the judges with arrogance that “reflects both their constituency and the current trajectory of the law,” he wrote. “They probably went too far, for today, but it was a sign of the direction in which they think they can go.” This is not a fight that will be won easily, or through a ruling that will resolve the constitutionality of the ban in a straightforward way.

It is unclear when the court will issue rulings in either case, but given the stakes, it’s a reasonable assumption that the decisions will come sooner rather than later. Even if they come soon, though, in just a few weeks the Supreme Court will hear oral arguments on another abortion-centered case, Dobbs v. Jackson Women’s Health Organization, which legal minds are predicting will beget a grim outcome for abortion rights. See you back here in a month, I guess.

SB8 undercuts the power of the courts and undermines the Court's popularity. Siding against TX might give the Court some badly needed political cover for whatever is to come in Dobbs. https://t.co/QRxWh77mvs