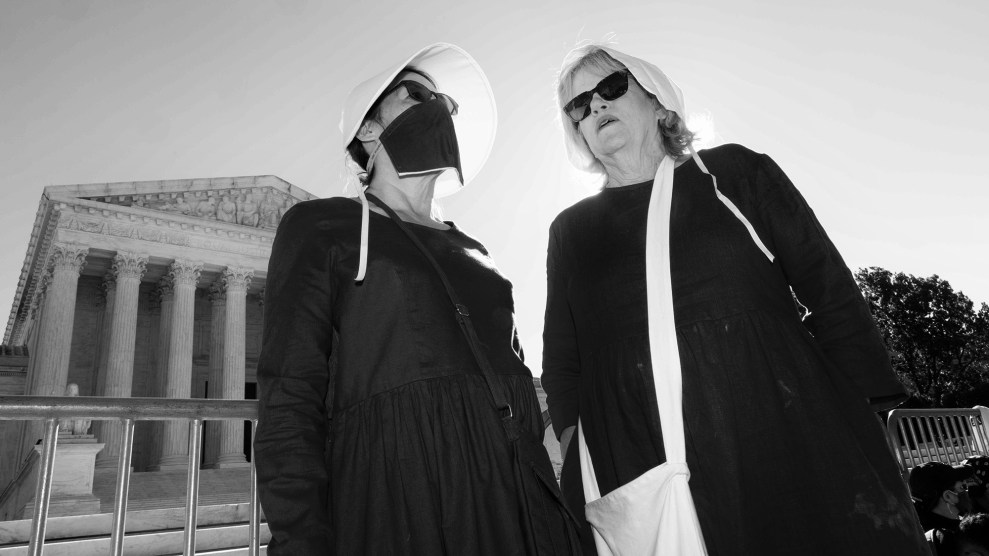 "Handmaids" rally as the Supreme Court hears arguments over a Texas law that bans abortion after six weeks.Jeff Malet/Newscom/Zuma

Fight disinformation: Sign up for the free Mother Jones Daily newsletter and follow the news that matters.
Today, in what could at best be considered a mixed ruling for abortion rights, the Supreme Court decided that abortion providers may sue some state officials in federal court over an extreme Texas abortion law. But in a huge blow, the court will also allow the law to remain in effect while the case moves forward.

2) Although the decision is technically a win for abortion providers (and pregnant people) in Texas, it's a very narrow one, and potentially not enough to support effective relief on remand.

SB 8 bans abortion after six weeks’ gestation and also allows any private citizen to sue both abortion providers and anyone who “aids and abets” patients trying to obtain an abortion. As Becca Andrews wrote recently, since the law took effect this fall, it has been “causing very real harm to pregnant Texans”:

I have spent the past couple months reporting out of reproductive health clinics for a book project I’m working on, and I’ve seen Texans seeking care in Alabama, Kansas, and Tennessee. The one that sticks with me was a young woman who came to Huntsville, Alabama, after traveling to Jackson, Mississippi, where she was told she was barely over that clinic’s gestational limit. She had been traveling for almost a week and was exhausted. She told me it was only the second time in her life that she had ever left Texas.

For now, that draconian abortion law will remain in effect, but the legal fight will continue in federal courts, even though the law was designed with the intent to escape just that.

To translate, the litigation can continue against some defendants but the practical effect is abortion is still mostly banned in Texas and the public health crisis and havoc continues. #liberateabortion #BansOffOurBodies #abortionisessential

In its decision on Friday, the court ruled in two distinct but related cases, neither of which directly considered the constitutionality of the law: Whole Woman’s Health v. Jackson, brought by abortion providers that challenged the standing of the law and providers’ ability to sue in federal court, which the law was designed to evade; and United States v. Texas, in which the US Justice Department sued the state of Texas. While the court allows the providers in Whole Woman’s Health to move their case forward, it dismissed United States v. Texas, throwing into question its jurisdiction to intervene when individual states pass laws that affect the constitutional rights of citizens.

Later this year, the court will rule on a separate abortion rights case, Dobbs v. Jackson Women’s Health Organization, which considers the constitutionality of a 2018 law that banned abortion in Mississippi after 15 weeks. (The law never went into effect—its enforcement was blocked in a federal appellate court.) This case has the power to overturn Roe, a fate that Becca wrote seems increasingly likely following oral arguments earlier this month.

God save the court, indeed.