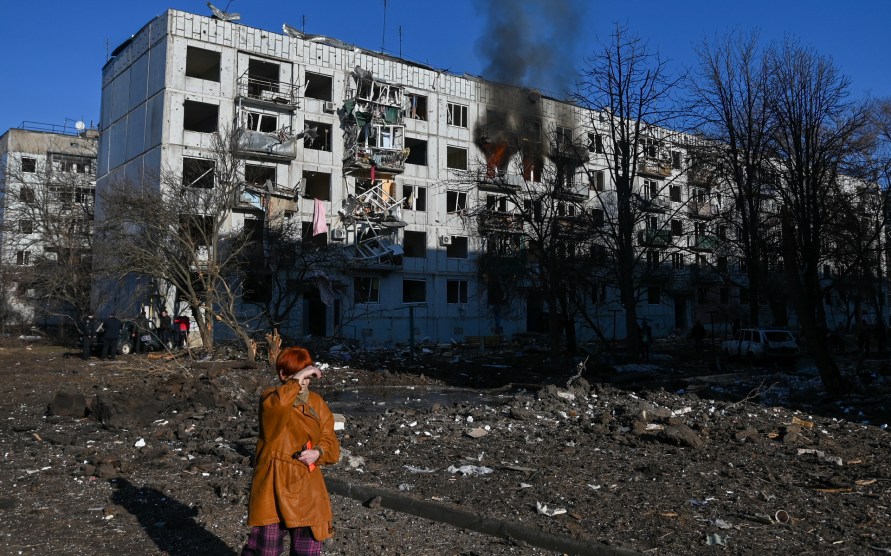 Residents of Chuhuiv stand in an apartment that has been severely damaged by a Russian bombardment.Justin Yau/AP

Early on Thursday morning, Russia attacked Ukraine in what has been described by officials as a “full-scale war.”

Explosions were seen across the country, even in the capital city of Kyiv—where a cacophony of gunfire and sirens backgrounded the fleeing of residents. Photos show the debris of buildings struck by rockets across the massive country, reports the Washington Post. “We are facing a war and horror,” 64-year-old Liudmila Gireyeva of Kyiv told the Associated Press. “What could be worse?”

For weeks, there have been dire warnings of the potential conflict. On Monday, after Russian President Vladimir Putin declared two eastern regions of Ukraine “independent”—resulting in swift sanctions from the United States and other western countries—the move seemed imminent. It was part of the way Putin has attempted to justify the invasion. Russia has explained this war in the language of self-defense; Russian officials say it was “necessary measures to protect [the country’s] interests” in response to the West and NATO who “broke their promises” on expansion. The West has said the actions are simply an invasion—full stop—of a sovereign nation, hiding behind flimsy rationale for aggression. “We woke up in a different world today,” a German official explained.

US President Joe Biden promised more actions beyond the already announced sanctions, including a “united response” from NATO to “hold Russia accountable.”

BIDEN: "The prayers of the entire world are with the people of Ukraine tonight as they suffer an unprovoked and unjustified attack by Russian military forces." pic.twitter.com/3UAQP2vQal

It’s unclear what this response will ultimately entail. France, another member of the alliance, has left open the possibility of some sort of military push; the country’s foreign minister said in a statement it “would further reinforce its support to Ukraine, under all its forms.”

Ukraine, for now, has promised it will defend itself. “Ukraine is moving into all-out defense mode,” its foreign minister told the press. The country has asked for recruits for its military.

Citizens are fleeing, in panic. Across the border in Poland, thousands of US troops have begun to set up refugee stations.

Within the United States, there have been a series of responses, often distanced from the horrors of war. Many are concerned that gas prices, already high, will soar. On the right, Fox News hosted Donald Trump, who chit-chatted his way through the invasion, going beyond just calling Biden “weak” to blaming the current administration for the invasion (all just a few days after praising Putin’s neo-imperial aggression as “genius“).