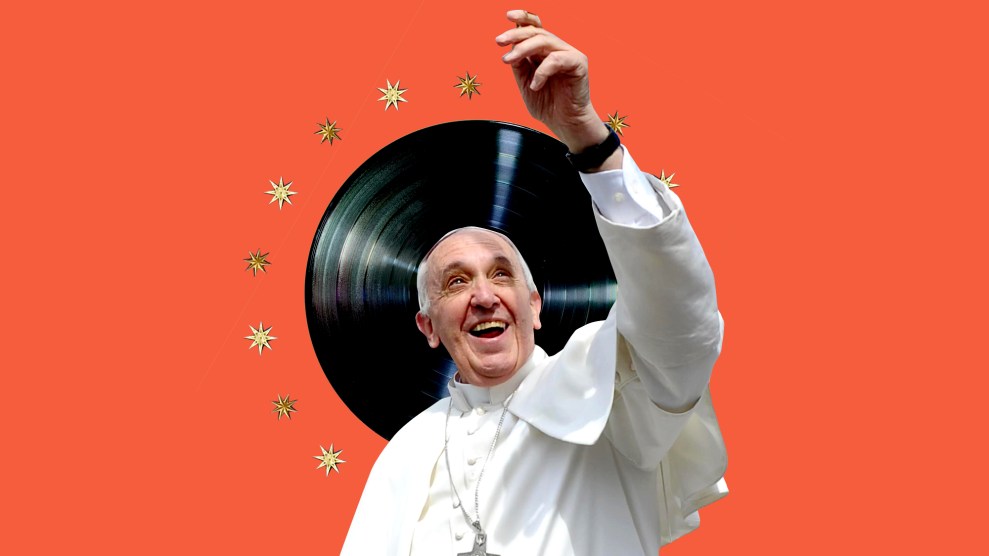 In early January a reporter spotted Pope Francis walking toward his Fiat 500 with Vatican plates. He was leaving an unexpected place: a Roman record store. The surprise visit turned into a sort of news event. Reporters flocked to the shop to learn that “the Holy Father,” as the record shop owner explained, “is passionate about music.” During his time as a cardinal, he would regularly visit to buy CDs.

Even better: Those of us wondering what Jorge Bergoglio might unwind with post-vespers over a nice glass of malbec or yerba mate are in luck. Cardinal Gianfranco Ravasi, president of the Pontifical Council for Culture, published a little taste and description of Il Papa’s collection of more than 2,000 CDs and 19 vinyl albums. While we yearn for more specifics, Ravasi told Italian reporters that the bishop of Rome enjoys a mix of mostly classical, interspersed with the greatest hits of Edith Piaf, gospel hymns performed by Elvis Presley, and, perhaps unsurprisingly, the tango music of his native Argentina.

With nothing else to do on a snowy weekend, I decided to cozy up and enjoy music a la Bergoglio. Would these jams be immaculate, or papal bull? I curated my playlist with the help of some media writers and my own sleuthing through Papa Frankie’s previous interviews. (If you want some pontifical tunes but don’t want to put in that kind of legwork, I suggest checking out America writer Keara Hanlon and her dope papal Spotify playlist.)

And I have to come to a weird conclusion: This music is overwhelming romantic. Forgive me Father if thinking so is a sin but…I can explain!

In the realm of classical music, Francis has been upfront about his love of Wolfgang Amadeus Mozart. I, too, like Mozart. (I am always in the mood to watch Amadeus, always.) In 2013, Pope Francis revealed that he especially loves “Et Incarnatus Est,” from Mozart’s Great Mass in C Minor (originally performed by Wolfgang’s fiancée, Constanze—adorable!). This music, according to Francis, “is matchless…it lifts you up to God.”

I can truly agree with the Holy Father here. There I was, running to the grocery store, so absorbed in the transcendent soprano that I’m crossing streets without a care, cars honking and swerving around me—this music almost had me literally lifted to God and removed from the US Census.

Another favorite is Beethoven’s “Leonore Overture No. 3.” Originally composed for his only opera, Fidelio, which the composer spent a decade writing, this overture was scrapped for being too dramatic. Beethoven’s piece explores the triumph of light over darkness and jubilation of freedom. It’s scary and sensual. I freaking loved it. Holy vibe!

Of course, an Argentine has to like tango, and Astor Piazzolla is specifically mentioned in the papal collection. A controversial tango legend, Piazzolla pushed the limits of the genre by incorporating elements of jazz, an influence the Argentine composer picked up as he grew up in New York. Maybe it makes sense that a somewhat unconventional pope would gravitate toward a rather unconventional musician.

When I first heard Piazzolla’s “Libertango,” I thought of Pink Floyd or Jethro Tull from the way the piano pounded and the staccato flute flew over the persistent percussion—no wonder Piazzolla is known for his influence on rock, pop, and funk.

This was tough for me. Do I think the King had a sultry voice? Yeah. Do I get down to a little bit of “A Little Less Conversation” and “Hound Dog”? Hell yes. But while it’s debated the extent to which Presley appropriated or elevated Black music, and whether or not he groomed Priscilla before their marriage (who was just 14 when they met)…I also just wasn’t feeling it. When it comes to lifting my soul, give me some Mahalia Jackson or the songs of Thomas A. Dorsey instead. I smell some papal bull here.

Oh, be still my heart! I speak no French, but does one need it for Piaf? With songs so lushly romantic and mournful, she has you missing a lover you’ve never met. Her enduring legacy comes through music that hints at a love that may never last and a world where beauty and sadness hold hands. I can imagine how, even after Francis undertook his vow of celibacy, Piaf might still resonate. And as I sat there drinking my tea and dreaming, I couldn’t help but wonder: Does the pope pine for a lost lover when he hears “La Vie en Rose”?

All in all, the Holy Father has some great musical taste.

Honestly, the one word that comes to mind when thinking about this music is “sensual.” Maybe that’s unexpected for a celibate octogenarian! But, as the saying goes, it takes all types. It was triumphant, mournful, and erotic—all over the course of an hour. The pope may have been critical of people who choose to have pets instead of children but maybe he should just do less talking, bump his music, and see if that helps with the Catholic procreation issue. Turn up, DJ Frankie!