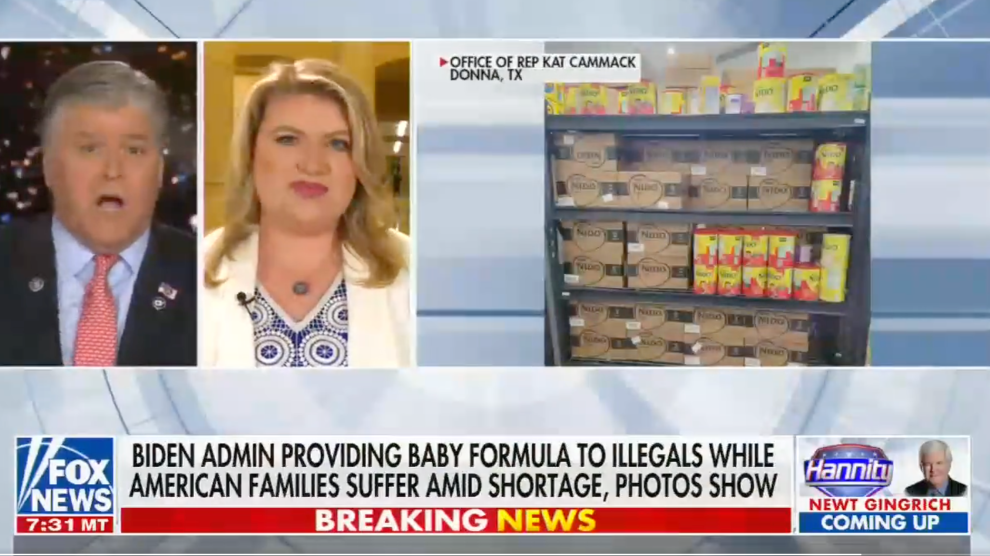 Okay, deep breath in…deep breath out. I just watched the videos compiled in this Twitter thread showing how Fox News has taken the baby formula shortage as yet another opportunity to paint migrants and asylum seekers as the enemy who’s coming for you. But this time it’s migrant babies. Let me repeat: migrant babies.

A key part to their “coverage” is what Rep. Kat Cammack (R-Fl.) tweeted this week—photos of what she said were “pallets and pallets” of baby formula at Border Patrol holding facilities. Cammack says the images her office has been circulating came from a Border Patrol agent, and now Fox News has been playing them in many shows over the last two days, saying “illegal immigrants are getting top priority” and receiving the baby formula that American parents are unable to find.

There are two things I’d like to point out after watching these videos.

Doocy: "American families, there's a shortage, but if you're a migrant, don't worry, because Uncle Sam has a stash of that." pic.twitter.com/UeOXI4jNB0

First, it’s hard to stomach listening to people on national TV say infants in US government custody should go hungry because they weren’t born here. These are babies with desperate mothers who are currently detained in jail-like facilities, and the government has the responsibility to feed them because they can’t leave to purchase their own formula, something immigrant rights experts, among others, have already said on social media.

Over the last year, the right-wing attacks on immigrants have gone to some really dark places but they keep getting worse. We're at the point now where Fox News is now effectively mainstreaming calls for the Border Patrol to harm babies in their care. Babies. Innocent babies. https://t.co/jPx9rDg7NR

Second, from what I can see, the images don’t exactly show pallets full of just baby formula. One of the images Cammack’s office shared shows a fully stocked shelf with baby formula, sandwiched between shelves of fruit pouches.

The first photo is from this morning at the Ursula Processing Center at the U.S. border. Shelves and pallets packed with baby formula.

The second is from a shelf right here at home. Formula is scarce.

And there are a couple other images making their rounds around MAGA world, and appearing on Hannity—The ones with all the supposed “pallets” of baby formula.

Joe is shipping pallets of baby formula to the McAllen, Texas border for illegals. (Left pic)

Here’s what he does for Americans! pic.twitter.com/33bm9alotG

Sean Hannity: "These are not people that respected our borders, our laws, and our sovereignty. Why wouldn't all of the pallets go to American families first?" pic.twitter.com/ERI8zAMT9K

The "baby" formula they are referring to is actually an infant formula by the name of NIDO which is for children 1+.
This is different than the baby formula which is in short supply.
Leave it to the @GregAbbott_TX and the @GOP to mislead the public for political gain. pic.twitter.com/uv5exV8G52

But from what I can see, the images showing pallets and shelves with dozens and dozens of cans are not baby formula, they’re cans of NIDO, which is a milk substitute for toddlers. Assuming these photos show what storage rooms currently look like in a Border Patrol holding facility, most of what anti-immigrant pundits and politicians are freaking out about is milk substitute for kids one year or older, not baby formula.

I’m not the only one noticing this.

I did a quick search for the NIDO cans in the viral photos and it looks like you can buy them at multiple online and in-store retailers. These are not part of the infant formula shortages.

It’s important to note that the last couple months have been stressful for parents who have been having an increasingly hard time finding formula for their babies. The panic is real, and not all infants can easily switch between brands, especially those who need specialized formula. But the shortage has gotten to this point for multiple reasons that have nothing to do with migrant children.

That doesn’t seem to matter much to Texas Gov. Greg Abbott and the National Border Patrol Council (the Border Patrol union), which released a joint statement yesterday saying the Biden administration was “happy to provide baby formula to illegal immigrants coming across our southern border,” as the shortage continues in the United States.

Politicians could do the work required to solve things like supply shortages, but deflecting responsibility and spewing racism is so much easier. American parents who can’t get formula for their kids now have someone new to erroneously blame, thanks to folks like @GregAbbott_TX. https://t.co/Vlf4aTurMC