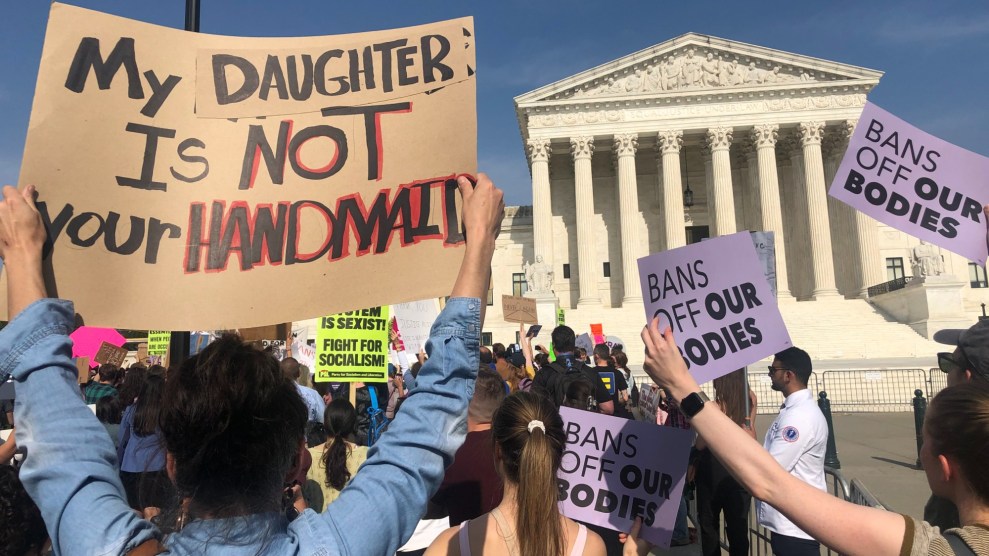 For the second day in a row, demonstrators gathered in Washington, DC,  on Tuesday to protest a leaked draft of a Supreme Court opinion overturning Roe v. Wade the landmark decision that established the constitutional right to abortion.

Over chants of “pro-life is a lie, they don’t care if people die” and “where’s Joe?,” the large crowd stood in front of the steps of the Supreme Court building holding signs that read “keep your politics out of my uterus” and “bans off our bodies.”

“I am here because I am angry and I am here because the United States Congress can change all of this,” Sen. Elizabeth Warren, one of several lawmakers who attended the protest, told the crowd. “I have seen the world where abortion is illegal and we’re not going back. Not ever!” Warren continued, warning that the Supreme Court’s draft opinion would overwhelmingly burden the poor, working mothers, and young victims of abuse and rape—not wealthy women.

Teal Quinn, who works at an animation study, drove with their 11-year-old child from Maryland after they insisted on taking part in their first protest. “I just want them to have the same rights I have,” Quinn said. “I trust women to make their own decisions and they ought to have the freedom to do that.”

At 69, Mickey Goldberg also came from Maryland with her husband to attend the rally.

“I have younger women in my family,” says Mickey Goldberg, 69. “It’s hard to imagine a world where we are stepping back to coat hangers and the dark ages of women’s health care. I’m here to protect their futures.” pic.twitter.com/MXpQ7d03a2

A second-year medical student at Howard University said he felt angry after reading the news about the draft decision.

“I’m going to be a future doctor and waking up this morning and seeing the news made me angry,” says Alex, 28, a second-year medical student. “This white coat is meant to be in the service of others. I’m gonna keep spreading the message that abortion is health care.” pic.twitter.com/GqAMTRN1cX

“For the last decade the GOP has made an organized effort to take away rights. First, voting rights, now this, affirmative action is next. We’re here to make sure we don’t go backwards 100 years,” says Maria Bahn Tigaoan, 68 (left). pic.twitter.com/Yrh4BuGt86

Several protesters stressed that overturning Roe would not lead to a total ban on abortions, only on safe abortions. Others expressed their discontent towards the justices with signs saying “abort the Court” and “the people have lost all confidence in SCOTUS.”

Constanza Guarino, 27, stopped by the rally in DC on her way back to New York after a workday. “I think this is a pretty monumental moment,” she said. “I am a strong believer that people should be able to decide what is best for themselves and no one should be forced into carrying a pregnancy.”

For Kathy Doan, a 59-year-old Christian, abortion is an issue of justice. “I think the assumption is that Christians don’t support women’s right to choose, but many like myself do,” she said. “If you care about women and children, abortion should be legal and safe.” Outlawing abortion, she added, “basically turns a woman’s uterus into a crime scene. Is that what we want?”